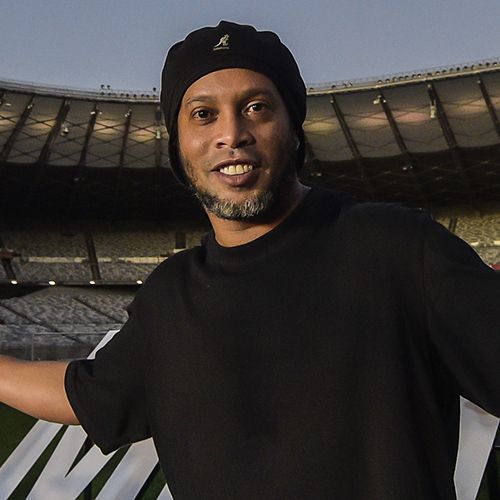 Brazilian soccer star Ronaldinho came from a family of soccer players to reach the pinnacle of success in the sport. After a celebrated youth career, Ronaldinho became a key member of the Brazilian team that won the 2002 World Cup. He has played for clubs in Brazil, France, Spain and Italy, and has twice been named FIFA World Player of the Year.

Ronaldinho was born Ronaldo de Assis Moreira on March 21, 1980, in Porto Alegre, Brazil. His father, João Moreira, was a former professional soccer player who also worked as a welder in a shipyard, and his mother, Miguelina de Assis, was a cosmetics saleswoman who later became a nurse. Ronaldinho's older brother, Roberto Assis, was also a professional soccer player; Ronaldinho was surrounded by soccer from the day he was born. "I come from a family where soccer has always been very present," he said. "My uncles, my father and my brother were all players. Living with that kind of background, I learned a great deal from them. I tried to devote myself to it more and more with the passage of time."

In particular, he idolized his father, who suffered a fatal heart attack when Ronaldinho was 8 years old. "He was one of the most important people for me and in my career, even though he died when I was very young," he said. "He gave me some of the best advice I've ever had. Off the field: 'Do the right thing and be an honest, straight-up guy.' And on the field: 'Play soccer as simply as possible.' He always said one of the most complicated things you can do is to play it simple."

Ronaldinho began playing organized youth soccer at the age of 7, and it was as a youth soccer player that he first received the nickname "Ronaldinho," the diminutive form of his birth name, Ronaldo. "They always called me that when I was little because I was really small," the player explains, "and I played with players who were older than me. When I got to the senior national team there was another Ronaldo, so they started calling me Ronaldinho because I was younger."

Growing up in a relatively poor, hardscrabble neighborhood, Ronaldinho's youth teams had to make do with makeshift playing fields. "The only grass on the field was in the corner," Ronaldinho remembers. "There was no grass in the middle! It was just sand." In addition to soccer, Ronaldinho also played futsal—an offshoot of soccer played indoors on a hard court surface and with only five players on each side. Ronaldinho's early experiences with futsal helped shape his unique playing style, marked by his remarkable touch and close control on the ball. "A lot of the moves I make originate from futsal," Ronaldinho once said, explaining, "It's played in a very small space, and the ball control is different in futsal. And to this day, my ball control is pretty similar to a futsal player's control."

Ronaldinho quickly developed into one of Brazil's most talented youth soccer players. When he was 13 years old, he once scored a ridiculous 23 goals in a single game. While leading his team to a variety of junior championships, Ronaldinho immersed himself in Brazil's long and glorious soccer history, studying past greats such as Pelé, Rivelino and Ronaldo, and dreaming of following in their footsteps. Then, in 1997, a teenaged Ronaldinho won a call-up to Brazil's Under-17 national team. The squad won the FIFA Under-17 World Championship in Egypt, and Ronaldinho was selected as the tournament's best player. Soon afterward, Ronaldinho signed his first professional contract to play for Grêmio, one of the most celebrated teams in the Brazilian league.

Ronaldinho made his senior debut for Grêmio in the 1998 Copa Libertadores tournament. The next year, he was invited to join the senior Brazilian national team to compete in the Confederations Cup in Mexico. Brazil turned in a second-place finish, and Ronaldinho won the Golden Ball Award as the tournament's best player as well as the Golden Boot Award as its leading goal scorer.

Firmly established as a star on the international stage, in 2001, Ronaldinho left Brazil for Europe, signing a contract to play for Paris Saint-Germain in France. A year later, he participated in his first World Cup on a loaded Brazilian squad that also featured Ronaldo and Rivaldo. Ronaldinho scored two goals in five matches, including the game-winner in a quarter-final victory over England, and Brazil went on to defeat Germany in the finals to claim its fifth World Cup title.

In 2003, Ronaldinho fulfilled a lifelong dream by joining FC Barcelona of the Spanish league, one of the world's most storied clubs, and winning the legendary No. 10 jersey typically worn by the squad's greatest creative player. In 2004 and 2005, Ronaldinho won back-to-back FIFA World Player of the Year awards, the sport's highest individual honor. He also led his teammates to the pinnacle of club success in 2006 with a triumphant run through the prestigious Champions League tournament. The following month, Ronaldinho headlined a very talented Brazilian squad that entered the World Cup with sky-high expectations. However, the tournament ended in disappointment for the defending champs, as France knocked Brazil out with a stunning upset in the quarter-finals.

In 2008, Ronaldinho left Barcelona to join another of the world's most renowned clubs, A.C. Milan, but his performance for the Italian Series A giant was mostly nondescript. Underscoring his fading status, the former World Player of the Year was not included in the 2010 Brazilian team that competed in the World Cup in South Africa.

In 2011, Ronaldinho returned to Brazil to play for Flamengo in Rio de Janeiro. The relationship between the club and its most prominent player got off to a great start when Flamengo won the 2011 Campeonato Carioca, but things turned sour by the following season. Ronaldinho missed several practices and performed indifferently in games, and eventually had his contract terminated due to unpaid wages. Ronaldinho signed with Atlético Mineiro in June 2012, a move that reignited his dynamic playmaking abilities, and he was given another shot with the national team to make the 2014 World Cup roster.

In 2005, Ronaldinho and Brazilian dancer Janaína Mendes had a son, named João, after Ronaldinho's late father. The Brazilian superstar remains close to his family, with brother Roberto serving as his agent and sister Deisy acting as his press coordinator.

An absolute wizard with a soccer ball, Ronaldinho is considered by many to be the greatest player of his generation and one of the best in history. He says that his soccer career has been an emotional roller coaster filled with high highs, low lows and a lifetime of unforgettable moments. "For me, soccer provides so many emotions, a different feeling every day," Ronaldinho said. "I've had the good fortune to take part in major competitions like the Olympics, and winning the World Cup was also unforgettable. We lost in the Olympics and won in the World Cup, and I'll never forget either feeling."