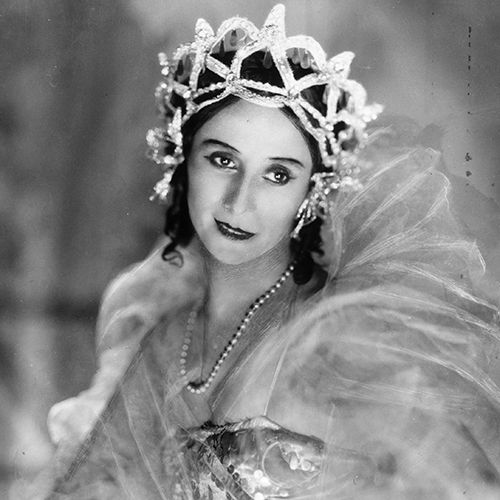 Who Was Anna Pavlova?

Anna Pavlova was a Russian prima ballerina during the late 19th and early 20th centuries. After attending the Imperial Ballet School, she made her company debut in 1899 and quickly became a prima ballerina. Her breakthrough performance was in The Dying Swan in 1905, which became her signature role. She joined the Ballet Russe in 1909 and formed her own company in 1911.

Anna Matveyevna Pavlovna Pavlova was born on February 12, 1881 — a cold and snowy winter's day — in St. Petersburg, Russia. Her mother, Lyubov Feodorovna was a washerwoman and her stepfather, Matvey Pavlov, was a reserve soldier. The identity of Pavlova's biological father is unknown, though some speculate that her mother had an affair with a banker named Lazar Poliakoff. As a child, Pavlova preferred to believe she was a product of an earlier marriage. She told people her mother had once been married to a man named Pavel, who died when she was just a toddler. Yet this Pavel remains something of a mystery to historians and biographers.

From early on, Pavlova's active imagination and love of fantasy drew her to the world of ballet. Looking back on her childhood, Pavlova described her budding passion for ballet accordingly: "I always wanted to dance; from my youngest years...Thus I built castles in the air out of my hopes and dreams."

Although they were poor, Pavlova and her mother were able to see a performance of The Sleeping Beauty at the Mariinsky Theatre in St. Petersburg when she was 8 years old. Captivated by what she saw, the wide-eyed little girl declared she was resolved to become a ballet dancer. Her mother enthusiastically supported her pursuit. Within just two years, Pavlova was accepted at the St. Petersburg Imperial Ballet School, after passing the entrance exam with flying colors. The school was directed by famed ballet master Marius Petipa.

At the Imperial Ballet School, Petipa and Pavlova's teachers, Ekaterina Vazem and Pavel Gerdt, quickly recognized her extraordinary gift. A dedicated and ambitious student, Pavlova knew a successful ballet career would require a lot more than just talent. Her natural gift for dance, combined with her tireless work ethic, is here summarized in her own words: "No one can arrive from being talented alone. God gives talent, work transforms talent into genius." In 1899, Pavlova graduated from the St. Petersburg Imperial Dance School at the age of 18—gracefully leaping from school to stage in her hard-earned transformation from ballet student to prima ballerina in the making.

Because Pavlova graduated as a coryphée, she was able to skip right over dancing in a corps de ballet. In other words, she bypassed the usual initiation rite of dancing in large groups and was permitted to dance in smaller groups right away. Fresh out of dance school, on September 19, 1899, the gifted young ballerina made her company debut, dancing in a group of three in La Fille Mal Gardée. The performance took place at the Mariinsky Theatre in St. Petersburg—the same theater where, as a child, Pavlova had first decided to become a dancer.

Pavlova's career soon blossomed. With every performance, she gained increasing critical acclaim and subsequent fame. But it was in 1905 that Pavlova made her breakthrough performance, when she danced the lead solo in choreographer Michael Fokine's The Dying Swan, with music by Camille Saint-Saëns. With her delicate movements and intense facial expressions, Pavlova managed to convey to the audience the play's complex message about the fragility and preciousness of life. The Dying Swan was to become Pavlova's signature role.

Pavlova continued to rise quickly through the ranks. By 1906, she had already successfully danced the difficult part of Giselle. Just seven years into her ballet career, Pavlova was promoted to prima ballerina.

Accompanied by a handful of other dancers, in 1907, Pavlova took leave on her first tour abroad. The tour stopped at capital cities throughout Europe—including Berlin, Copenhagen and Prague, among others. In response to the critical acclaim her performances received, Pavlova signed up for a second tour in 1908.

In 1909, after having completed her second tour, Pavlova was invited to join Sergei Diaghilev's Ballet Russe on its historic tour, during the opening season in Paris. Pavlova's fellow dancers in the company included the likes of Laurent Novikoff, Thadee Slavinsky, Olga Spessivtzeva, Anatole Vilz and Alexander Volinine. While touring, the Ballet Russe frequently visited Australia, and there played an instrumental role in Russian ballet's influence on the future of Australian dance. During 1910, Pavlova toured the United Kingdom and the United States. When she wasn't dancing solo, her more notable dance partners included Laurent Novikoff and Pierre Vladimirov.

In 1911, Pavlova took a major step in her career—by forming her own ballet company. As a result, Pavlova was able to retain complete creative control over performances and even choreograph her own roles. Pavlova put her husband, Victor Dandré, in charge of organizing her independent tours. For the final two decades of her ballet career, she toured with her company all over the world, as little girls watched in awe and were inspired to become dancers, the same way she had been at the Mariinsky Theatre all those years ago.

In 1930, when Pavlova was 50 years old, her 30-year dance career had come to physically wear on her. She decided to take a Christmas vacation after wrapping up a particularly arduous tour in England. At the end of her vacation, she boarded a train back to The Hague, where she planned to resume dancing. On its way from Cannes to Paris, the train was in an accident. Although Pavlova was unharmed in the accident, she was forced to wait out the delay outside on the train platform for 12 hours.

It was a snowy evening, and Pavlova was only wearing only a thin jacket and flimsy silk pajamas. Once in Holland, within days of the accident, she developed double pneumonia and her illness quickly worsened. On her deathbed, Pavlova, passionate about dance until her final breath, asked to see her swan costume one last time. She died in The Hague, Netherlands, in the wee hours of the morning, on January 23, 1931. Her ashes were interred at Golders Green Cemetery, near the Ivy House where she had lived with her manager and husband in London, England.

Pavlova was one of the most celebrated and influential ballet dancers of her time. Her passion and grace are captured in striking photographic portraits. Her legacy lives on through dance schools, societies and companies established in her honor, and perhaps most powerfully, in the future generations of dancers she inspired.