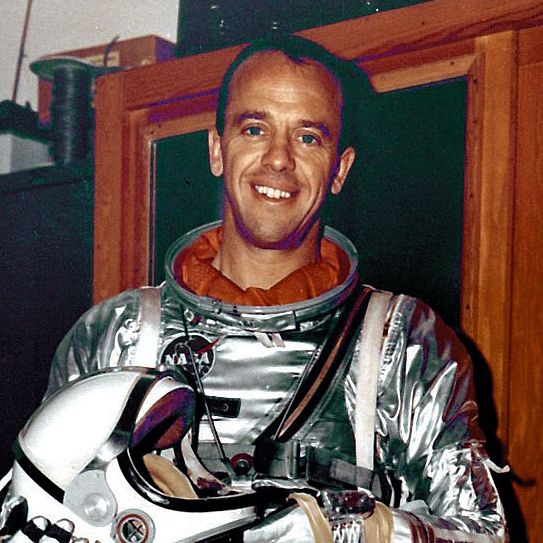 Who Was Alan Shepard?

In 1959, Alan Shepard became one of the original seven Mercury program astronauts. In May 1961, 23 days after Yury A. Gagarin became the first human to orbit Earth, Shepard made a 15-minute suborbital flight that reached an altitude of 115 miles. He later commanded the Apollo 14 flight (1971), the first to land in the lunar highlands.

Legendary astronaut Alan Shepard was born on November 18, 1923, in East Derry, New Hampshire. After completing high school, Shepard enrolled at the U.S. Naval Academy. Shepard served on the destroyer Cogswell in the Pacific during World War II. After the war, he trained to become a pilot. He attended the U.S. Navy Test Pilot School in Patuxent River, Maryland, in 1950.

As a test pilot, Shepard flew a number of experimental planes, including the F3H Demon and F5D Skylancer. He also served as an instructor at the Test Pilot School for a time. Later on, Shepard attended the Naval War College in Newport, Rhode Island.

In 1959, Shepard won a coveted spot in the National Aeronautics and Space Administration's program for space exploration. He and six others, including John Glenn and Gus Grissom, became known as the "Mercury 7." They were an elite group chosen from one hundred test pilot who have volunteered for the program.

Shepard made history on May 5, 1961, as his Freedom 7 spacecraft flew up into the sky from its Florida launch pad. He became the first American in space, a month after the Soviet cosmonaut Yuri Gagarin had earned the distinction as the first person in space. After roughly four hours of delays, Shepard traveled more than 300 miles in his 15-minute-long mission. Shepard came down in the Atlantic Ocean near the Bahamas, where he was picked up by the aircraft carrier Lake Champlain.

Shortly after returning to the United States, Shepard traveled to the White House to receive the NASA Distinguished Service Medal from President John F. Kennedy. He was also honored with a ticker-tape parade in New York City.

For nearly a decade after his famous first mission, Shepard was grounded because of an ear problem. He had surgery to fix his condition, hoping to make it back into space. In 1971, Shepard got his wish. He and Ed Mitchell were selected for the Apollo 14 mission to the moon. They took off on January 31, 1971, and they spent more than 33 hours on the moon. During this mission, Shepard became the fifth person to walk on the moon, and the first to play golf on its surface. He had packed a specially designed golf club just for this purpose.

After retiring in 1974, Shepard became chairman of Marathon Construction Corporation and founded his company, Seven Fourteen Enterprises. He also chaired the Mercury 7 Foundation, which offered college scholarships to those interested in science and engineering.

Shepard died in California in 1998, after a long battle with leukemia. He was survived by his wife, Louise, their three daughters, and several grandchildren. At the time of his passing, fellow astronaut John Glenn spoke about Shepard with The New York Times: "He was a patriot, he was a leader, he was a competitor, a fierce competitor. He was a hero. Most importantly to us, he was a close friend." President Bill Clinton remembered Shepard as "one of the great heroes of modern America," according to a separate report in The New York Times.