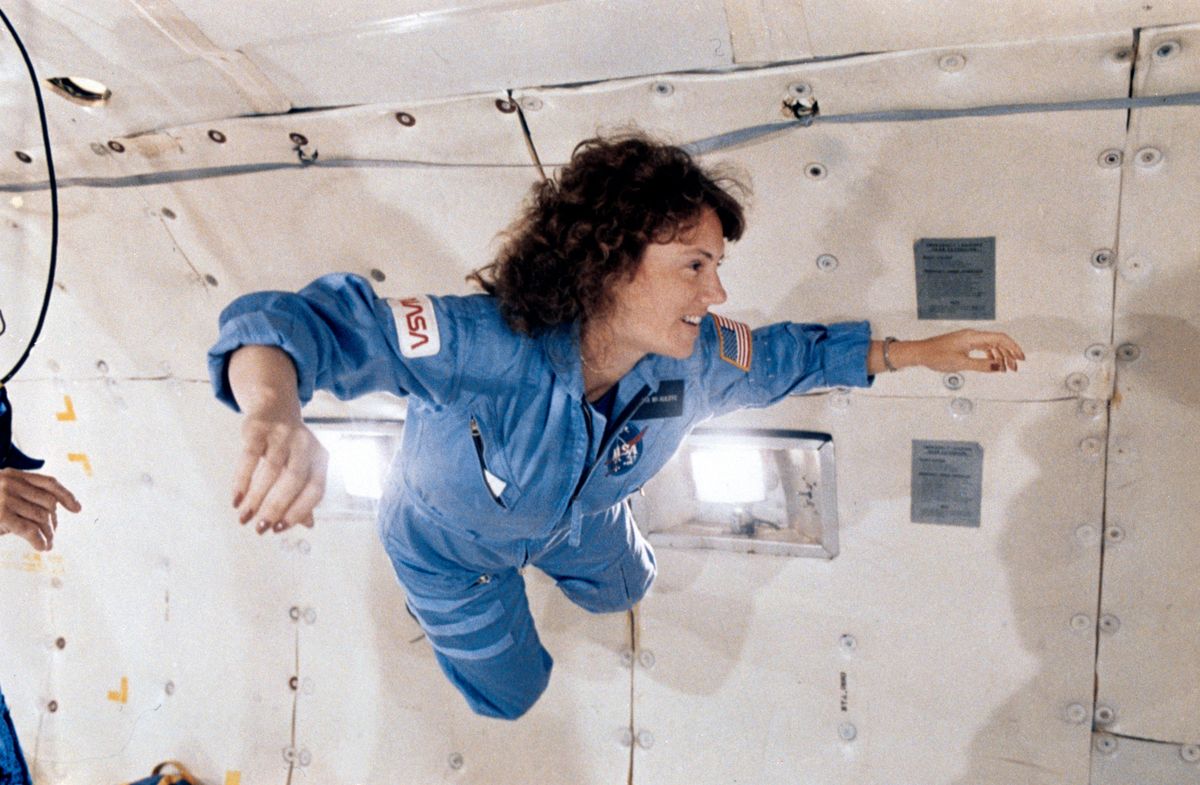 Christa McAuliffe was used to speaking in front of people, but on July 18, 1985, she found herself in an extraordinary situation, admitting, “It’s not often that a teacher is at a loss for words.”

The social studies teacher from New Hampshire’s Concord High School, who had been teaching since 1970, couldn’t believe that she was standing in the White House’s Roosevelt Room, with then-Vice President George H.W. Bush announcing that she was going to be the first civilian to go to space with NASA.

“I'm still kind of floating,” McAuliffe said after the ceremony, according to The New York Times. “I don't know when I'll come down to earth. When that shuttle goes up, there might be one body, but there's gonna be 10 souls that I'm taking with me.”

That enthusiasm and passion made the then 36-year-old mother of two the perfect candidate for NASA’s inaugural Teacher in Space program, which President Ronald Reagan had announced in August 1984 to show the importance of the profession.

But what was meant to be a show of appreciation to educators turned into tragedy when the Challenger space shuttle became engulfed by fire 73 seconds after takeoff from Cape Canaveral, Florida, on January 28, 1986, tragically killing the crew: Gregory Jarvis, Judy Resnik, Dick Scobee, Ronald McNair, Michael J. Smith, Ellison Onizuka — and McAuliffe.

The application process was very arduous

In the first program of its kind, NASA received more than 11,000 applications — each 11 pages long — from educators who had to have worked full time for five years in primary or secondary public or private schools and meet medical requirements. The field was narrowed down to 114 candidates, two from each U.S. state and territory, as well as the Department of Defense and Department of State overseas schools, and the Bureau of Indian Affairs schools.

Those selected were then asked to attend a week-long workshop in Washington, where they learned about educational programs with NASA and were also interviewed by a board. Ten finalists were then taken to Houston’s Johnson Space Center for medical examinations, interviews and briefings, with the final choice being made by NASA Administrator, James Beggs.

“I want to demystify NASA and space flight,” McAuliffe wrote in her application, adding that she wanted to keep a diary to “humanize” her experiences. “I want students to see and understand the special perspective of space and relate it to them.''

Along with McAuliffe, a second-grade teacher from Idaho, Barbara Morgan, then 33, was selected as the alternate. The two trained together at the Johnson Space Center from September 1985 to January 1986.

“We’re good friends and we get along well. We’re buddies, we’re going through the training together,” Morgan said. “I don’t feel like a shadow, I feel every bit as involved as Christa.”

They trained to serve as payload specialists on the flight, learning everything from how to use the television cameras (which McAuliffe would use to conduct her virtual lessons from space, including one called “The Ultimate Field Trip”) to how to operate shuttle’s toilets. They also experienced weightlessness aboard a KC-135 and familiarized themselves with the shuttle’s controls and warning lights to prepare themselves for anything that might go wrong.

“I realize there is a risk outside your everyday life, but it doesn't frighten me,” McAuliffe told The New York Times Magazine. 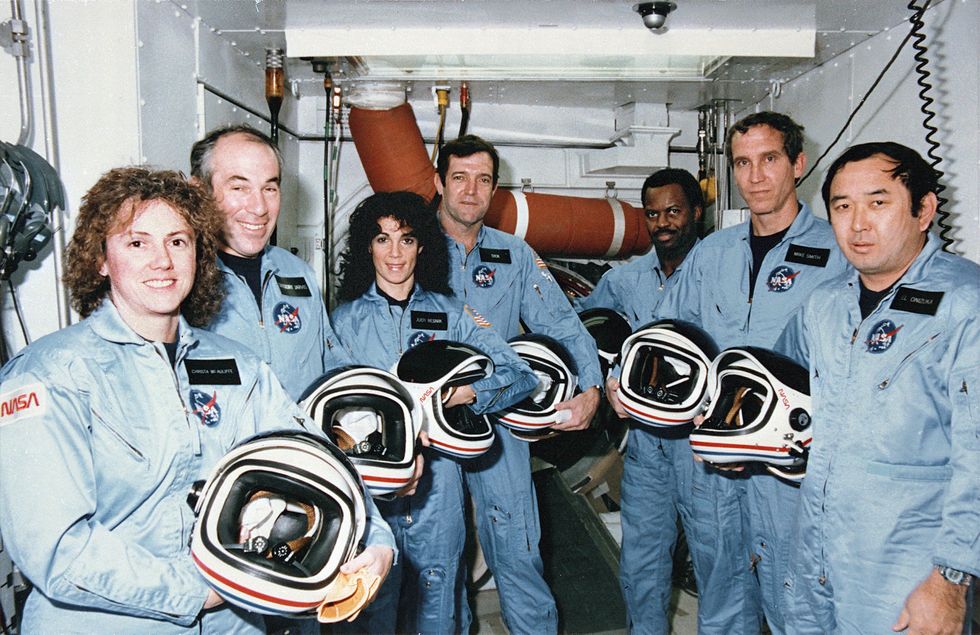 On January 28, 1986, McAuliffe boarded the Challenger, armed with her 9-year-old son Scott’s stuffed animal, a frog named Fleegle, for good luck. The world’s eyes were on the shuttle as it gloriously lifted off from Kennedy Space Center at 11:38 a.m.

Just 73 seconds after it left the earth, the Challenger was engulfed in smoke. Though it was unclear at first what had happened, one thing was obvious: All those aboard did not survive.

While many initially described it as an explosion, NASA immediately suspended all its missions to figure out what went wrong. It was later revealed that two rubber O-rings that were supposed to seal the rocket booster section had failed because of the chilly temperatures of launch morning.

Even more devastating, engineers knew exactly what was going to happen and tried to stop it. Bob Ebeling was one of the engineers at the NASA contractor Morton Thiokol who tried to warn their managers and NASA about the problem, but they were overruled. “It's going to blow up,” Ebeling told his wife the night before the launch. He knew the temperature was going to be an issue.

“I was one of the few that was really close to the situation,” Ebeling told NPR’s All Things Considered, still blaming himself three decades later. “Had they listened to me and wait[ed] for a weather change, it might have been a completely different outcome.”

READ MORE: The Crew Members Who Died in the Challenger Disaster

The Challenger disaster has remained a dark spot in NASA’s history, especially in a moment that was supposed to provide such a hope for the future of both space travel and education. The Teacher in Space program was discontinued.

Morgan took on the duties of a Teacher in Space designee from March to July 1986, speaking around the country on behalf of NASA. But that fall, she returned home to her teaching job. Twelve years later, NASA asked her back, not as a civilian, but to train to become an astronaut. In August 1998, she started training at Johnson Space Center and became a mission specialist, eventually working in the CAPCOM and robotics branches.

In August 2007, she finally made it to space on the shuttle Endeavour, becoming the first Educator Astronaut to reach orbit. “If we don’t take any risks at all, we’re not going anywhere,” she said before the flight. “We teachers encourage our students all the time in the classroom to take some risks.”

Morgan looks back on the positives of the Challenger — and the hope it embodied. “Christa was a great representative of the teaching profession,” she told Space.com. “Christa reminded everybody, at a time when education was being lambasted, that our country is full of good teachers who are working really hard in the classroom to do the best they can to help our young people have a bright future.”

The lessons McAuliffe hoped to teach aboard the Challenger are now available online as part of her Lost Lessons. But perhaps the most valuable lesson she taught was the importance of education, as she famously captured in the words: "I touch the future. I teach.” 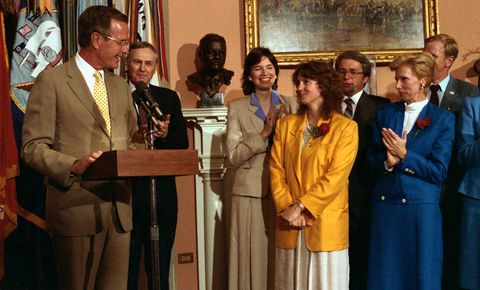