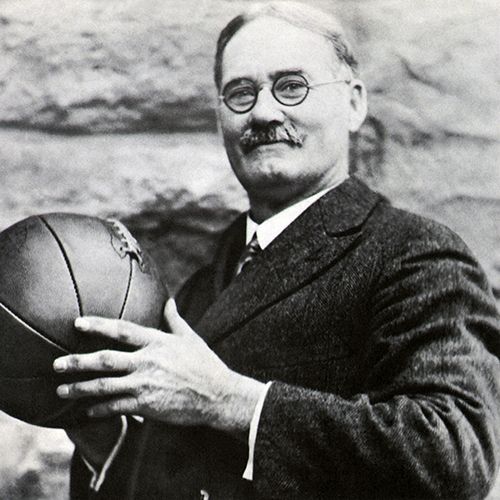 Who Was James Naismith?

James Naismith was a Canadian-American sports coach and innovator. He invented the game of basketball in 1891, and he is also credited with designing the first football helmet. He penned the first basketball rulebook, and established the basketball program at the University of Kansas. Naismith has been given numerous posthumous honors for his contributions to the world of sports. He died in Kansas on November 28, 1939, at the age of 78.

Born on November 6, 1861, in Almonte, Ontario, Canada, Naismith was the second child of Scottish immigrants. He married Maude Evelyn Sherman in 1894 in Springfield, Massachusetts, and the couple had five children. He became an American citizen in 1925.

Around the age of 30, Naismith left his athletics director position at McGill University in Montreal to teach physical education at the YMCA International Training School in Springfield, Massachusetts. Upon the request of his boss, Naismith was tasked to create an indoor sports game to help athletes keep in shape as they endured the cold New England winters. Naismith's boss also stipulated that this new game should be "fair for all players and not too rough."

The result was the game of basketball. Invented in 1891, Naismith created 13 basic rules and started out using 10-foot high peach baskets as the goals for each 9-player team.

By 1893, the game had become so popular that the YMCA began promoting it internationally and, in 1904, it served as a demonstration sport at the Summer Olympics in St. Louis, Missouri. By 1936, the sport became an official event at the Summer Olympics in Berlin. Naismith lived long enough to see not only these honors but also the beginnings of the National Invitation Tournament (1938) and the NCAA Tournament (1939).

Although his new sport was taking off, Naismith was said to have more interest in his career in physical education. After leaving the YMCA in Springfield, Massachusetts, he moved to Denver to obtain his medical degree in 1898. He then founded a basketball program at the University of Kansas, where he initiated a long lineage of prestigious basketball coaches, starting with Phog Allen, who would then famously coach ace players-turned coaches Adolph Rupp, Dean Smith and Ralph Miller. Naismith had a lengthy career at the University of Kansas, totaling almost four decades. In 1937, he helped form the National Association of Intercollegiate Basketball, which would later be recognized as the National Association of Intercollegiate Athletics (NAIA). He received numerous sports awards during his lifetime and posthumously.

In 1939, Naismith suffered a severe brain hemorrhage. He died nine days later on November 28, 1939, in his Lawrence, Kansas, home at the age of 78. His seminal work, Basketball — its Origins and Development, was published two years after his death.