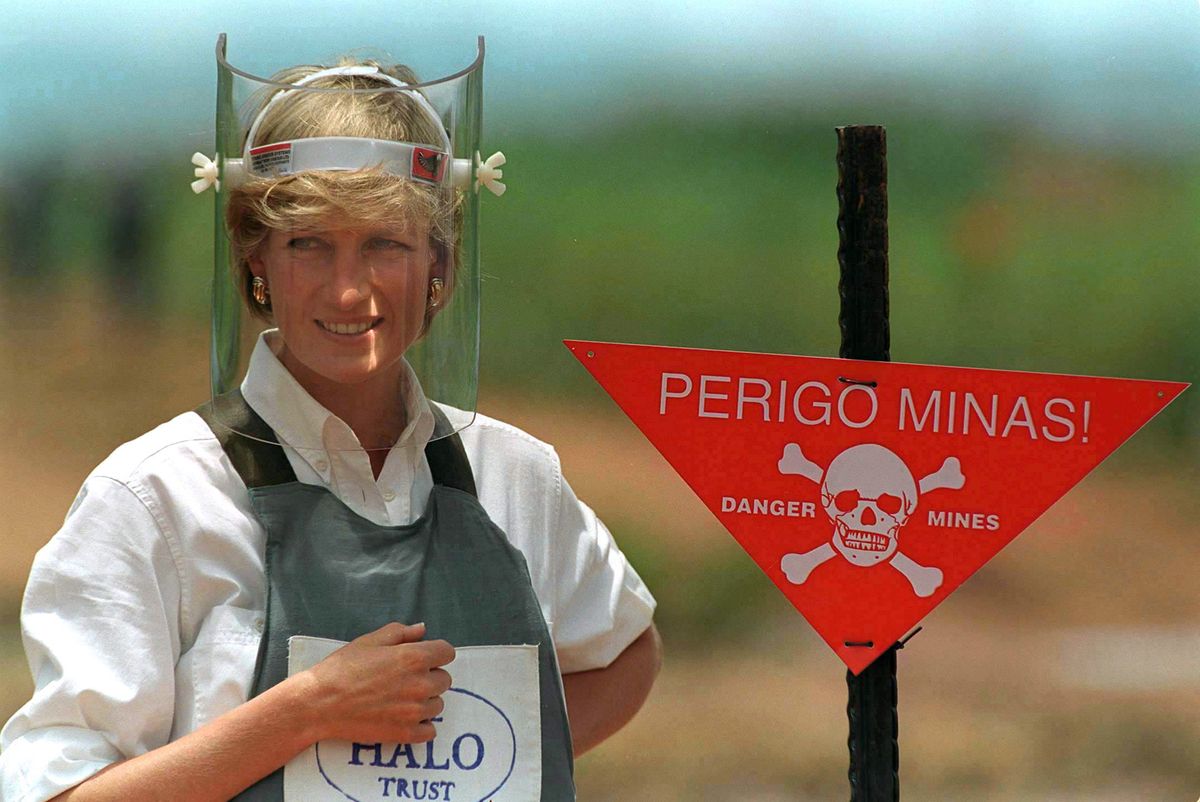 When Princess Diana was tragically killed in a car crash in 1997, Prince Charles knew exactly the place to take his young sons to escape the media and have the space to properly mourn their mother. “My dad told my brother and me to pack our bags — we were going to Africa to get away from it all,” Prince Harry told Town & Country.

The escape gave the young royals the opportunity to process what had happened, but there was also the symbolic connection that their mother had with the continent — that her sons now share as well. “I have this intense sense of complete relaxation and normality here. To not get recognized, to lose myself in the bush with what I would call the most down-to-earth people on the planet, people with no ulterior motives, no agendas, who would sacrifice everything for the betterment of nature,” the 35-year-old Duke of Sussex said. ”This is where I feel more like myself than anywhere else in the world. I wish I could spend more time in Africa.”

“Africa is the perfect place to come,” Prince William also said on a 2010 trip to Botswana. “The locals, wherever I go, haven't got a clue who I am and I love that.” That sense of anonymity the British royals rarely receive elsewhere has given them the opportunity to authentically experience the continent and understand its culture — as well as the issues the locals face, as they continue their mom’s work all over Africa. For Diana, frequent visits during her early years led to a love for Africa and a commitment to bettering the lives of its people.

Diana began visiting African as soon as she became a princess

Diana set foot in Africa just days after she officially became a royal since she and Prince Charles honeymooned on a 12-day cruise through the Greek Islands to Egypt, greeting the then-president’s wife, Jehan Sadat, before flying back from Hurghada International Airport in August 1981. Five years later, she visited Hurghada, an Egyptian Red Sea resort town, during a 1986 tour of the Middle East.

But soon her royal tours started getting deeper, as she attended a Rural Women’s Fair in Tafawa Balewa Square in Lagos, Nigeria, and visited hospital victims in Bamenda, Cameroon, during a March 1990 royal tour with Charles.

Two years later, in May 1992, she went on a five-day tour of Egypt on her own to see the archaeological sites and also met with mothers on welfare, held hands with children at the Cairo Institute for Polio and Rehabilitation, and reached out to kids at the Aswan Social Rehabilitation Centre. 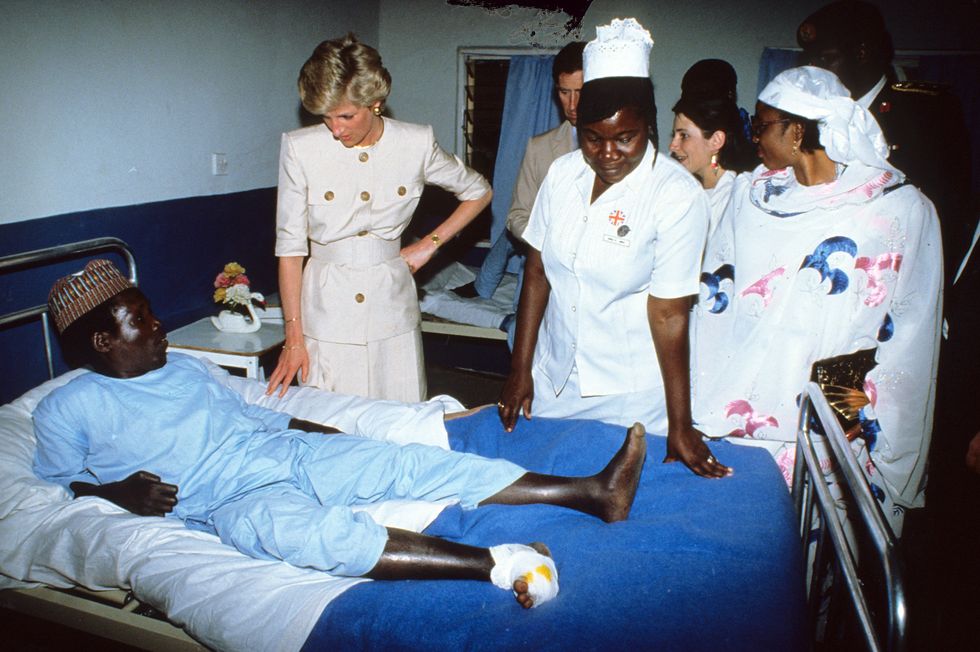 Princess Diana with a patient during a hospital visit in Cameroon in March 1990
Photo: Anwar Hussein/WireImage

Diana’s early visits exposed her to the African culture — as well as the issues the people faced — and she quickly used her influence to shed light on particular ones that weren’t getting attention, including leprosy, also known as Hansen’s disease, a bacterial disease that can lead to nerve damage and crippling of the hands and feet.

To combat rumors that it could be spread by touch, Diana visited patients suffering from the disease, held their hands and touched their wounds. Her work with The Leprosy Mission took her to India, Nepal and Zimbabwe, where she visited patients in a Tongogara refugee camp, in July 1993.

“It has always been my concern to touch people with leprosy, trying to show in a simple action that they are not reviled, nor are we repulsed,” the princess said of the disease

Months before her death, Diana walked through an active landmine to expose its danger

Perhaps one of Diana’s most notable humanitarian efforts is her commitment to exposing the danger of landmines by walking through an active one on January 15, 1997, in Huambo, Angola with The Halo Trust, an organization that has been clearing mines since 1994.

“I’d read the statistics that Angola has the highest percentage of amputees anywhere in the world,” she told the press. “That one person in every 333 had lost a limb, most of them through landmine explosions. But that hadn’t prepared me for reality.”

She met with landmine victims, young and old, including at Neves Bendinha, an ICRC Orthopedic Workshop in Luanda, Angola, before donning the armor and headgear to stroll into the field.

Landmine removal expert Paul Heslop recalled the day to the BBC: “She wasn't making eye contact, and I felt that initially, she was disinterested. And then, when the whole mob of journalists came off the other planes, I suddenly realized why she was so nervous. And this poor woman was about to go into a live minefield, a dangerous area, in front of however many hundreds of millions or billions of people on the news, and I thought back to the first time I went into a minefield, and I was petrified.”

After some careful instruction and reassurance, the two stepped into the field and the Princess pushed a button to detonate a dummy landmine. "One down, 17 million to go," Diana said as she hit the button.

When she returned home after the visit, she wrote a letter to the Red Cross saying, “If my visit has contributed in any way at all in highlighting this terrible issue, then my deepest wish will have been fulfilled.”

Her work even impressed one of the best-known activists of the generation, Nelson Mandela, who she met in Cape Town in March 1997, just months before her death.

Mandela complimented her for her work with the landmines in Angola and said her actions helped South Africa destroy its mines as well. He also lauded her for her work with AIDS victims. “We saw her sitting on the beds of AIDS patients and shaking hands with them, and that changed perceptions dramatically with regards to AIDS,” he said of her frequent visits to victims in the UK, as well as stops in Brazil and Canada.

And while she was technically on a private trip to visit her brother Earl Spencer who lived in Cape Town, she noted that was the point of her visit with Mandela too: “I came here to discuss the situation of AIDS in the country with the president and that's what we've been discussing. I said if I can help in any way, I'm available to do it.”

Diana said she was “absolutely thrilled” to meet Mandela and he said he was “still trembling” after the visit, adding that “I didn't know that I would meet a British princess.” When the photographers suggested he give her a kiss, he answered, “That would be treason.”