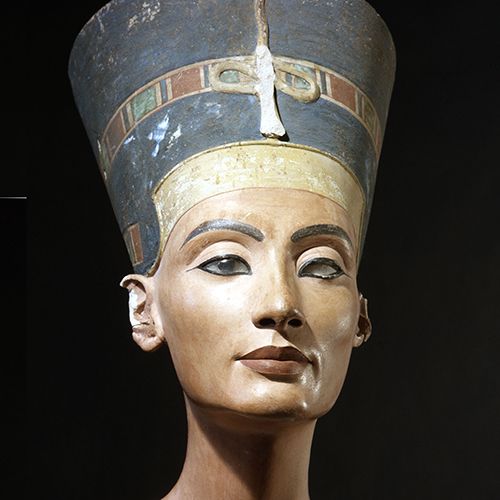 Nefertiti, whose name means "a beautiful woman has come," was the queen of Egypt and wife of Pharaoh Akhenaten during the 14th century B.C. She and her husband established the cult of Aten, the sun god, and promoted Egyptian artwork that was radically different from its predecessors. A bust of Nefertiti is one of the most iconic symbols of Egypt.

Little is known about the origins of Nefertiti, but her legacy of beauty and power continue to intrigue scholars today. Her name is Egyptian and means "a beautiful woman has come." Some evidence suggests that she hailed from the town Akhmim and is the daughter or niece of a high official named Ay. Other theories have suggested that she was born in a foreign country, possibly Syria.

The exact date when Nefertiti married Amenhotep III's son, the future pharaoh Amenhotep IV, is unknown. It is believed she was 15 when they wed, which may have been before Akhenaten assumed the throne. They apparently ruled together from 1353 to 1336 B.C. and had six daughters, with speculation that they may have also had a son. Their daughter Ankhesenamun would eventually marry her half brother Tutankhamun, the future ruler of Egypt. Artwork from the day depicts the couple and their daughters in an unusually naturalistic and individualistic style, more so than from earlier eras. The king and his head queen seem to be inseparable in reliefs, often shown riding in chariots together and even kissing in public. It has been stated that the couple may have had a genuine romantic connection, a dynamic not generally seen in depictions of ancient pharaohs.

Worship of the Sun God

Nefertiti and the pharaoh took an active role in establishing the Aten cult, a religious mythology which defined Aten, the sun, as the most important god and the only one worthy of worship in Egypt's polytheistic canon. Amenhotep IV changed his name to Akhenaten (also seen as "Akenhaten" in some references) to honor the deity. It is believed that the king and queen were priests and that it was only through them that ordinary citizens could obtain access to Aten. Nefertiti changed her name to Neferneferuaten-Nefertiti, meaning "beautiful are the beauties of Aten, a beautiful woman has come," as a show of her absolutism for the new religion. The royal family resided in a constructed city called Akhetaton—in what is now known as el-Amarna—meant to honor their god. There were several open-air temples in the city, and at the center stood the palace.

Nefertiti was perhaps one of the most powerful women ever to have ruled. Her husband went to great lengths to display her as an equal. In several reliefs, she is shown wearing the crown of a pharaoh or smiting her enemies in battle. But despite this great power, Nefertiti disappears from all depictions after 12 years. The reason for her disappearance is unknown. Some scholars believe she died, while others speculate she was elevated to the status of co-regent—equal in power to the pharaoh—and began to dress herself as a man. Other theories suggest she became known as Pharaoh Smenkhkare, ruling Egypt after her husband’s death or that she was exiled when the worship of the deity Amen-Ra came back into vogue.

In August 2015, British archaeologist Nicholas Reeves made a discovery that could reveal the mysteries of Nefertiti once and for all. While studying scans made of Tutankhamun's tomb, he noticed some wall markings that could indicate a hidden doorway. This fact and other structural anomalies suggest that there could be another chamber there, and Reeves has proposed that it could be the long-missing tomb of Nefertiti. If this proves true, it would be an astounding archaeological discovery and the most significant since Howard Carter's 1922 uncovering of Tutankhamun.