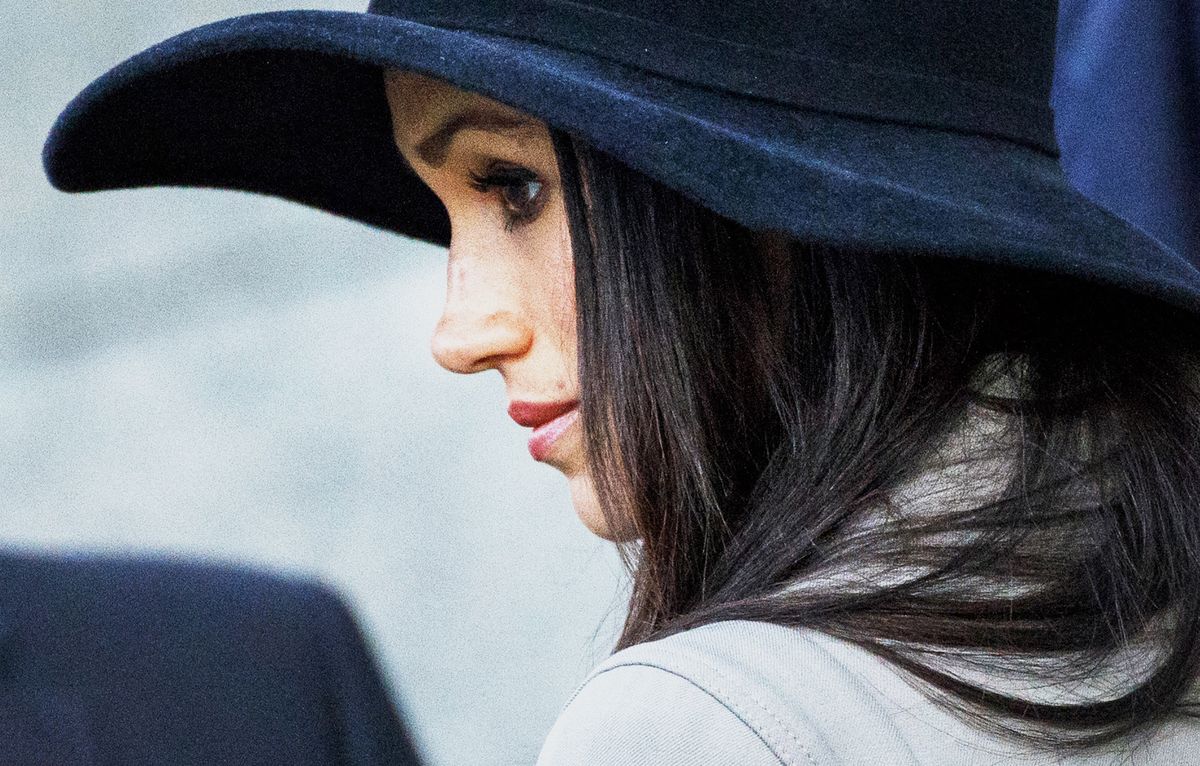 Meghan Markle began a real-life fairy tale when she married Prince Harry on May 19, 2018. However, her happy-ever-after ending has been marred by a complicated relationship with her dad, Thomas Markle. Meghan and her father were once close. But before her wedding, he staged paparazzi photos and subsequent heart troubles made him miss the chance to walk his daughter down the aisle at her royal nuptials. In the summer of 2018 he began to publicly air personal information about his daughter and indulged in attacks on her and her in-laws. After friends spoke out to defend Meghan, Thomas shared a personal letter from her, seemingly more committed to defending himself than considering what effect his actions might have on his daughter.

Meghan's dad supported her and her acting career

Growing up, Meghan's relationship with her father was much less complicated. It had its rough spots — her parents had split up when she was two, officially divorcing a few years later — but Thomas adored her. From the time she was 11, she lived with him during the week while attending private school. When she started performing in school productions, Thomas used his lighting skills to help her find the best angles.

In addition to paying Meghan's private school tuition, Thomas helped foot the bill for college. And when his daughter embarked upon an acting career, he used his pull to help her get a small part on General Hospital, where he was the lighting director.

Meghan reportedly cried before her wedding because her dad wasn't there

When Meghan's engagement to Prince Harry was announced in November 2017, her father's name was included on the statement from Kensington Palace. Though Thomas hadn't met Harry, the two had spoken on the phone and seemed to get along. Meghan's plan was for Thomas to walk her down the aisle.

Thomas (and the rest of Meghan's family) had come under a great deal of press scrutiny thanks to Meghan and Harry's relationship. And a few weeks before the wedding, some surprising paparazzi photos of Thomas were published. The images included him getting fitted for a suit (presumably for the wedding), studying a book about Britain and looking at pictures of Meghan and Harry online. Just days before the wedding, the Daily Mail revealed Thomas had coordinated with a photographer to stage the shots.

Thomas then decided not to attend his daughter's wedding due to embarrassment. Yet though Thomas had initially lied to Meghan and Harry about his involvement in staging the photos, and had received money for them, they still wanted him at the wedding. He decided to attend — but then heart trouble intervened. Thomas told TMZ his heart surgery meant he would not be going to England. According to Vanity Fair, an observer saw Meghan cry before getting married as she thought about her father not being there.

She begged Thomas not to speak to the media, but he has not listened

Harry and Meghan had counseled Thomas not to engage with the media and were therefore surprised, according to a source speaking with ET, when Thomas was interviewed by Piers Morgan on Good Morning Britain in June. On the show, Thomas not only shared that Meghan and Harry longed for a baby, but he also brought up Harry's views on Brexit and Donald Trump (commenting on politics is a breach of protocol for royals).

Thomas was soon talking to British papers as well. In July, the Daily Mail published an interview with him in which he complained about being cut out of Meghan's life: "What riles me is Meghan's sense of superiority. She'd be nothing without me. I made her the Duchess she is today. Everything that Meghan is, I made her." The next month, he admitted to the paper that he'd initially lied to Meghan and Harry about his involvement in the staged paparazzi photos and that he'd hung up on one of their phone calls.

Thomas also gave two interviews to The Sun in the summer of 2018. In July he told the paper that Meghan looked "terrified" in her new life. In August, he compared the royal family to a cult.

To prove how close he and Meghan had once been, Thomas shared loving notes from his daughter with the Daily Mail in December. In addition, that month he again talked via satellite with Morgan on Good Morning Britain. Though he'd been giving interviews in August, he said, "I’ve been quiet for six months, and no one has returned anything back to me, no one’s said a word to me." He then wondered if Queen Elizabeth II could help heal the rift between him and Meghan. 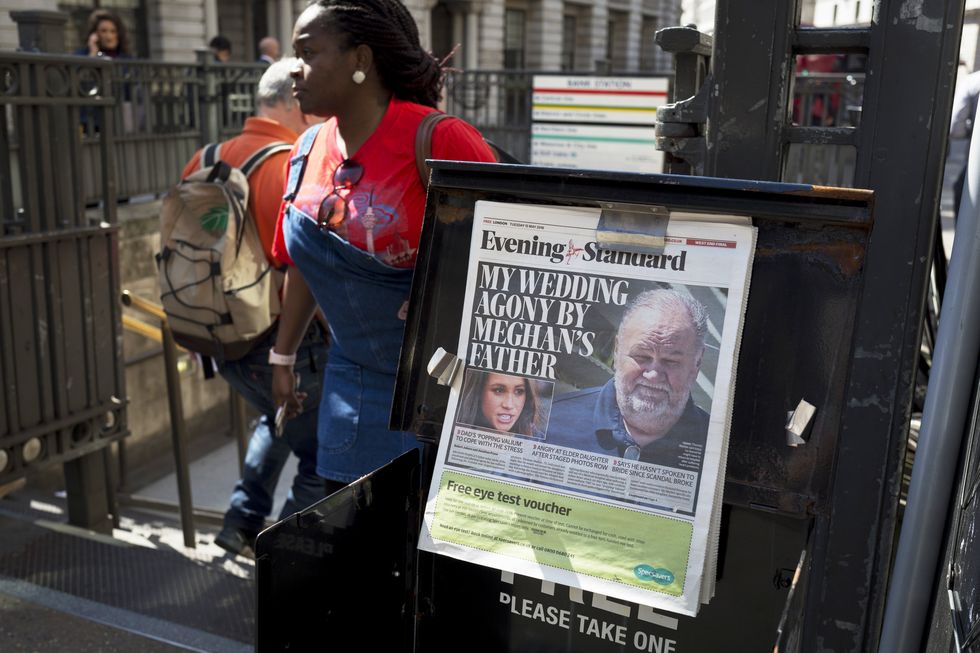 Thomas Markle on the cover of the ’Evening Standard’ in London
Photo: Richard Baker/In Pictures via Getty Images

Meghan asked her dad to 'please stop creating so much pain'

Royal protocol dictates that Meghan not engage in public PR battles. But five of her friends decided to speak to People magazine for its February 18, 2019, issue about how she was being portrayed. They touched on a range of subjects, including Meghan and Thomas' relationship. A "longtime friend" said Meghan had written her father a letter asking him to refrain from media appearances so they could repair their relationship. In return, Thomas had frustrated Meghan by responding with a request for a public photo op.

After the People article came out, Thomas showed the letter from Meghan (which she'd sent to him in August 2018) to the Daily Mail. In it, she had written, "Your actions have broken my heart into a million pieces." She also said, "If you love me, as you tell the press you do, please stop. Please allow us to live our lives in peace. Please stop lying, please stop creating so much pain, please stop exploiting my relationship with my husband."

Thomas told the Mail he felt justified in releasing his daughter's letter because he had "the right to defend myself." He also confirmed he'd asked Meghan for a photo, having written, "I wish we could get together and take a photo for the whole world to see. If you and Harry don’t like it? Fake it for one photo and maybe some of the press will shut up!" In the interview, he also offered the defense of: "Meg accuses me in the letter of cashing in but I’ve only accepted a few payments. I worked it out and if I’d taken all the offers I’ve had, I could have made $600,000. I haven’t done that."

In her letter to Thomas, Meghan also wrote, "I pleaded with you to stop reading the tabloids. On a daily basis, you fixated and clicked on the lies they were writing about me, especially those manufactured by your other daughter, who I barely know."

Thomas' other daughter, Samantha Markle, is a product of his first marriage who is 17 years older than Meghan. Though the half-sisters are estranged, Samantha has been publicly criticizing Meghan since at least November 2016 (long before she was left off the wedding guest list). Shortly before Meghan's wedding, Samantha's daughter told the Daily Mail that Samantha "hasn't liked Meghan since essentially she was born," and noted, "She's just been overall jealous of Meghan as soon as she got famous."

It seems less likely that Samantha will receive an invite from the queen to come over for tea and crumpets than she is to step out of the media spotlight and stop talking about Meghan.

Prince Harry told Thomas the press will 'eat you alive'

In his August 2018 interview with the Daily Mail, Thomas said, "Harry told me that I should never go to the press. That it would end in tears. He said, 'They will eat you alive.' He was right." Yet Thomas hasn't stopped talking.

At the moment when Thomas revealed Meghan's private letter, his daughter was seven months pregnant, and still adapting to a very different life in a new country. Only time will tell if his complicated relationship with Meghan will mend itself.