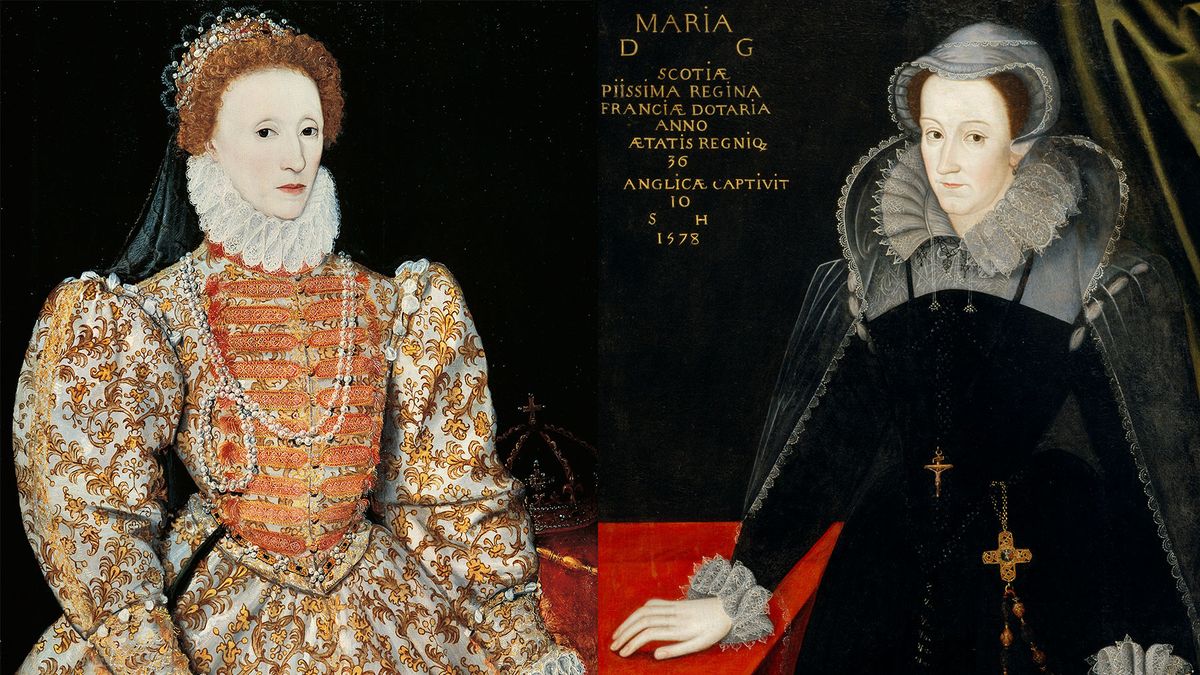 For centuries, dramatists, engravers, writers have portrayed the contentious meeting between Mary, Queen of Scots and Elizabeth I of England. But in reality, the two powerhouse sovereigns never met. Although it was Mary’s greatest wish to meet her cousin, the all-powerful Virgin Queen Elizabeth I simply didn’t want to.

From the beginning, the cards were stacked in Elizabeth’s favor. Mary, Queen of Scotland since she was an infant, had been raised in France and married to the Dauphin as a teenager. After a short stint as Queen of France, the widowed Mary wished to return to Scotland to rule and to convince Elizabeth I to name her as her successor. She believed that “they would satisfy each other much better than they can do by messages and ministers.” After all, Mary reminded an English diplomat, they had a lot in common;

We are both in one isle, both of one language, both the nearest kinswoman that each other hath, and both Queens.

Elizabeth, already a hardened veteran of family feuds over the crown, was not eager to meet Mary and refused to even give her safe passage on her way back to Scotland. Despite this cold shoulder, Mary returned safely to Scotland in 1561 and immediately set about trying to set up a meeting with Elizabeth.

A warm beauty known for her legendary charm, Mary believed that she could easily win over Elizabeth in person and gain political concessions as a result. “In view of Mary’s known success in the sphere of personal contact,” biographer Antonia Fraser notes, “her steady aim to meet Elizabeth must be regarded not as the caprice of an inquisitive woman, but as a sound piece of political reasoning.”

Instead of enticing her, stories of Mary’s magnetic personality repelled Elizabeth, who feared she would be bewitched by her cousin. “There is something sublime in the words and bearing of the Queen of Scots that constrains even her enemies to speak well of her,” she once noted. Mary laid on the charm thick when Elizabeth’s ministers visited. She effusively wished for a conference with her “dear and natural sister,” and so dramatically sang Elizabeth’s praises that one diplomat recounting her over-blown, almost unbelievable rhetoric assured his readers, “Believe me I do not feign.”

Plans were made for the cousins to meet

The love-starved Elizabeth adored compliments almost more than power, and her curiosity about her Catholic cousin finally won out. In 1562, plans were made for a summit between the two Queens to take place in late-August. However, Elizabeth was forced to pull out when Mary’s French relatives began an all-out war against Protestants in their country. As a Protestant Queen, Elizabeth could not be seen exchanging pleasantries and words of love with a Catholic sovereign with close ties to France.

When Mary found out the summit was canceled, she dissolved into a flood of tears. Meeting Elizabeth became an obsession for her, which only deepened through the years. “Mary, always more avid for personal contact, became the supplicant to her cousin, pleading, increasingly desperate, for an audience, for intimacy,” biographer Jane Dunn notes. “Elizabeth, increasingly suspicious, withheld her presence, backed off, fearing her rival’s reputation for enchantment, then disdainful of her undoing.”

After Mary’s disastrous reign in Scotland, she threw herself at the mercy of England. Elizabeth now had her rival firmly in her grasp. Elizabeth initially dangled a carrot to the desperate Mary – as soon as her name was cleared in the murder of her husband Darnley, they could finally talk. “Among all worldly pleasures,” Elizabeth wrote, “[meeting you] will hold the first rank.”

But it was not to be. Throughout her long 19 years of British captivity (1568-1587), Mary had ample time to write Elizabeth letters, begging for a chance to explain things face to face. When Elizabeth did not respond or turned to her favorite political double speak, Mary’s letters became threatening. “If for any reason I cannot come to you,” she wrote, “seeing I have freely come to throw myself in your arms, you will I am sure permit me to ask assistance of my other allies — for thank God, I am not destitute of some.”

When threats didn’t work, Mary went back to flattery. She even composed a poem about her hopes for a meeting. In 1570, she wrote;

I shall discover to you the secrets of my heart... I shall devote myself more and more to love, honour, and obey you...and if you please so to favour me, I would beg of you first of all to command me when you please, where you please, in what company, to remain as secretly, as long or as short, without seeing or being seen but by you, with whom alone I have to do.

By now, Elizabeth was immune to these desperate missives — Mary had become a nuisance and a menace. “Because they never met,” Jane Dunn notes, “the self-interested reports of others, malicious gossip and their own fantasies, coloured by wishful thinking or fear, took the place of reality. It was inevitable that for each their rival should grow to monstrous scale and, deprived of humanity, become a cipher for predatory threat.”

In August 1575, the two Queens would be the closest geographically they ever were in their entire lives, with Mary taking the baths at Chatsworth, and Elizabeth on summer progress to Stafford. As Fraser writes, Mary hoped Elizabeth’s curiosity would get the best of her, but it was not to be. As Elizabeth — not without a heart — noted shortly before she ordered Mary’s execution in 1587, things could have been different if it were not for the two women’s royal blood;

I assure you, if the case stood between her and myself only, if it had pleased God to have made us both milkmaids with pails on our arms, so that the matter should have rested between us two; and that I knew she did and would seek my destruction still, yet could I not consent to her death... Yea, if I could perceive how I might be freed from the conspiracies and treasons of her favourers in this action — by your leaves she should not die.

Indeed, one wonders what would have happened if Mary and Elizabeth had ever met. “If only these two women could have gotten together and had a conversation, one with the other, they could have settled their differences,” historian Dr. John Guy notes. “These women were the only two people on the planet at that time who knew what it was to be in the shoes of the other one.” Instead, we must rely on movie-makers and fiction writers to fill in the historical gaps of the greatest meeting that never was.