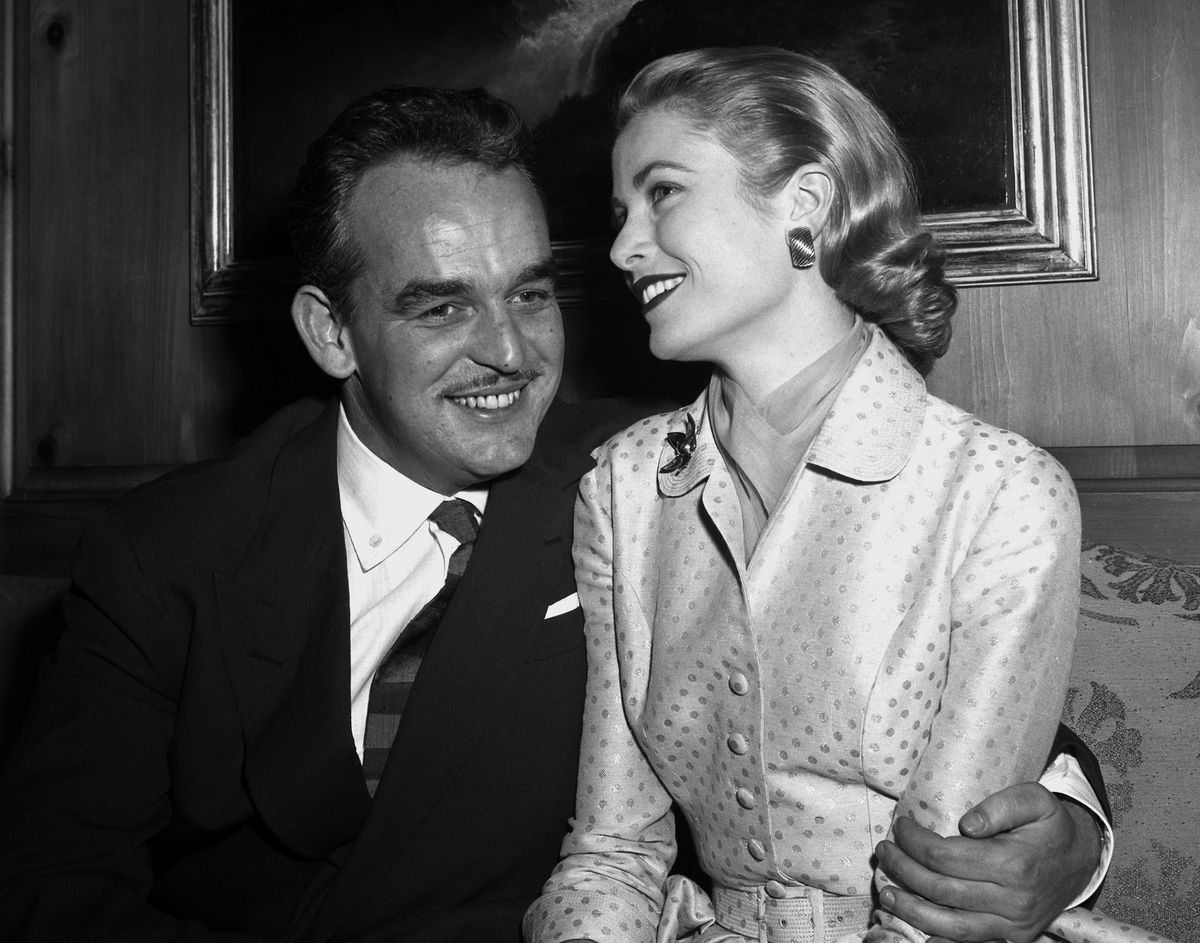 Long before Prince Harry wed Meghan Markle, there was another lavish fairytale wedding between a European royal and an American actress… when Prince Rainier III of Monaco married Grace Kelly in 1956.

Both were seemingly at the top of their worlds before they met: He had stepped up to assume the throne on May 9, 1949, at the age of 26, after his grandfather died and she had just snagged the best actress Academy Award for the 1954 musical drama The Country Girl. But then a chance encounter on a French train spiraled into an introduction between the unlikely couple — and eventually led to one of the highest-profile romances of a generation.

In the spring of 1955, some of the biggest names in cinema history were boarding an overnight train from Paris to Cannes to attend the Cannes Film Festival, an annual tradition since 1946. Two-time Oscar winner and Gone with the Wind actress Olivia de Havilland was on the luxury Le Train Bleu from Gare du Lyon with her newlywed husband, Pierre Galante, an editor at Paris Match magazine when they found out that Kelly was also on board.

During the journey, Nice-born Galante thought maybe Paris Match should arrange a meeting between Kelly and the prince. Over dinner, he posed the idea to his editor in chief Gaston Bonheur — and immediately everyone grew enthusiastic about the possibility. “It was an idea that struck [Pierre] for the first time while dining on the train after he learned Grace Kelly was a fellow passenger,” de Havilland told People.

De Havilland was tasked with tracking Kelly down on the train ride — and finally found her "on the small platform between the dining car and the next carriage when I overtook her to ask if she would agree to a meeting with Prince Rainier,” she told People. “Grace struck me on the first encounter as a rather reserved, self-possessed, well brought up young woman.”

The two actresses’ conversation must have gone well since Kelly was game — but also gave herself a potential out. “She immediately agreed but made the highly professional proviso that such a meeting must first be approved of by the studio sponsoring her visit to Cannes: MGM,” de Havilland said.

That stipulation could have been a hurdle since at the time Kelly’s relationship with her studio was tense since she had refused to make a film with Robert Taylor. But de Havilland was just glad her fellow actress didn’t shut down the idea immediately. 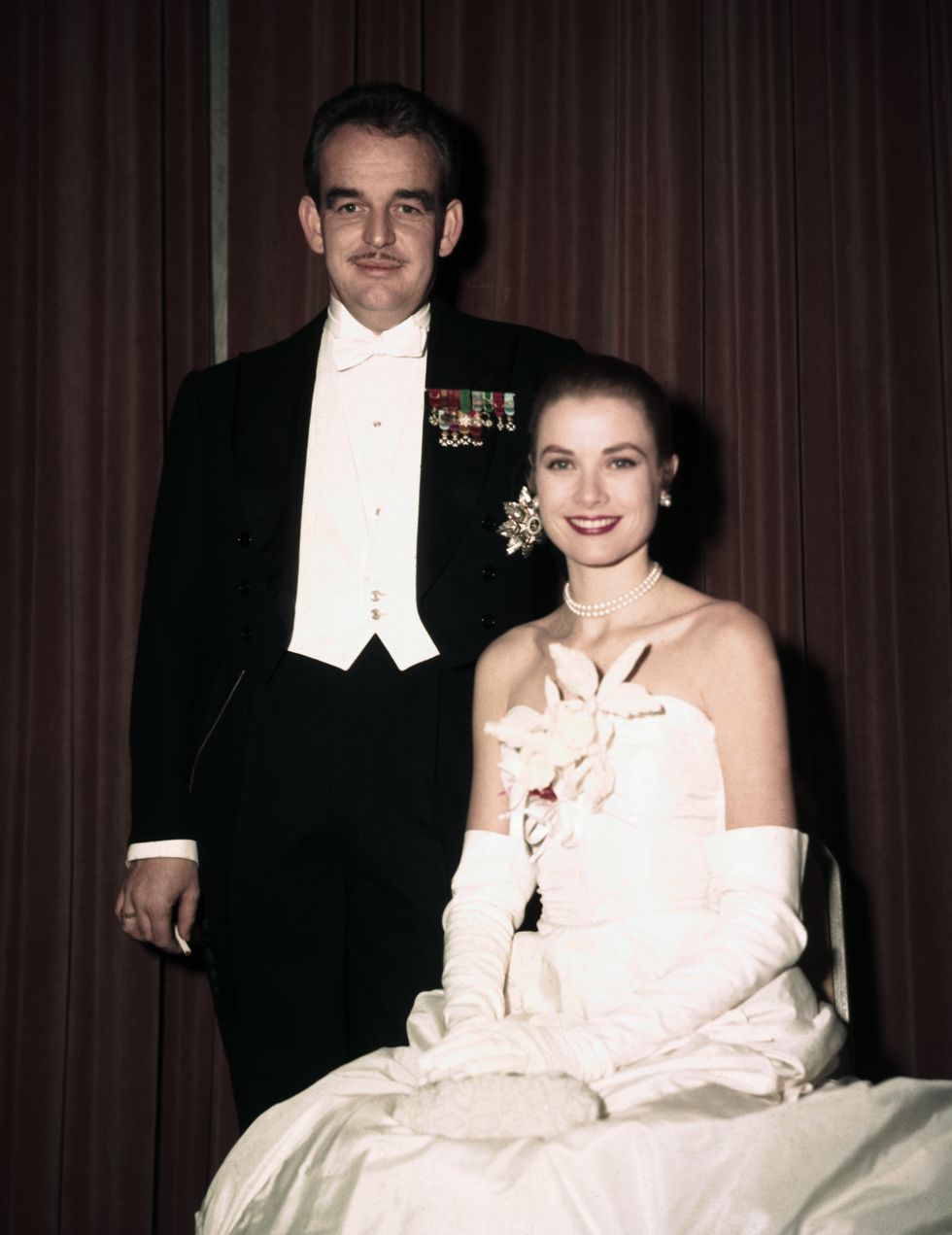 When the train arrived in Cannes on Thursday, Galante started making the proper arrangements and set up a 4 p.m. meeting at Rainier’s palace the very next day. When the information was passed along to Kelly, she declined the invite. After all, this was a work trip for her and she had an obligation to appear at a cocktail event for her film The Country Girl at 5:30 p.m., according to People.

But Galante wasn’t giving up so quickly and managed to move the meeting up to 3 p.m. — an hour’s difference that made all the difference in the world. Kelly agreed to the meeting.

As soon as Kelly stepped out of the shower the morning of their meeting, things went wrong. She found that the city had no electricity because of a labor strike — and her hair was dripping wet and she didn’t have her clothes ironed, according to People.

But she got creative: She tied her hair back, dressed it up with flowers and put on an “Easy to Sew” silk floral taffeta that she had worn previously for McCall’s Pattern, but didn’t require ironing. With the elevators out, she ran down the stairs and met Galante. Of course, photographers followed.

But more bad luck followed, as well. They got into a minor car accident, reportedly with photographers who were following them. The delay caused them to miss the prince, so instead, Kelly was given a tour of the 225-room palace without him.

Thankfully, Rainier arrived before Kelly had to leave and decided to give her a tour of his own private zoo. The two walked ahead of their entourages, chatting with one another in his garden while Paris Match documented the meeting in photographs.

Kelly had to rush back to Cannes for the event that de Havilland was also at. “I guessed things had gone wonderfully well by Grace’s manner upon returning from her presentation to Rainier,” she told People. “She was in a state of enchantment.”

Rumors circulated that despite being engaged to another man, Kelly was pressure to marry the royal

At the time Kelly was reportedly engaged to fashion designer Oleg Cassini, according to The Hollywood Reporter. While both Rainier and Kelly were already under such a microscope because of their public personalities, little is known of what happened directly after that meeting, though many theories filled gossip columns.

But actions started to speak louder than words, as the New York Times noted: “He went to Philadelphia to spend a Christmas holiday with her family. She went to Monte Carlo to visit him in his 200-room pink palazzo.”

While some have reported that Kelly’s heart was still with Cassini and that familial pressure made her choose royalty, Kelly herself stepped out for a press conference in her hometown of Philadelphia before flying to Monaco for her wedding.

“I think just taking the step of marriage is enough to give a girl a bit of a twinge and certainly leaving home to do it, well, it’s a very moving thing,” she told reporters. “I don’t know how to explain it.” When asked how her French language skills were (the language spoken in Monaco), she replied, “Comme ci, comme ça,” meaning “so so.”

Kelly and Rainier had an epic two-day wedding

The wedding of Hollywood’s darling and the prince of Europe’s longest-ruling family took place over two days: a 15-minute civil ceremony in the Palace Throne Room on April 18, 1956 (followed by a 25-minute recitation of 140 new titles that Kelly now held) and a religious ceremony the next day, in which she wore two custom gowns gifted to her by MGM by designer Helen Rose, according to People.

The grandiose ceremony took place at Monaco’s Cathedral of St. Nicholas with a guest list of 600 people, including Hollywood heavyweights like Cary Grant and Ava Gardner as well as society names like Conrad Hilton and Aristotle Onassis.

“Mom said it was ‘overwhelming,’ — that ‘excited’ or the word ‘overjoyed’ wasn’t strong enough to express her feelings,” their son Prince Albert told People. “My father said so too.”

“It was such an incredible affair and it’s left such a mark on people,” he continued. “What it has meant for people has been incredible. For us… it was our parents getting married. But what it’s meant for Monaco, for people around the world, and, how their story continues to fascinate people, that’s something unimaginable.”

After her wedding, Kelly gave up acting

As soon as she officially became a royal, Kelly became fully dedicated and gave up her Hollywood career. Even though she only made 11 films — including 1952’s High Noon, 1953’s Mogambo, and a trio of Alfred Hitchcock classics Dial M for Murder, Rear Window and To Catch a Thief — she cemented her reputation as a leading actress of the Hollywood’s Golden era.

“I loved working at my craft — I didn't like the public appearance of having to be a movie star,” she admitted in her last television interview with Pierre Salinger for ABC on June 22, 1982, shortly before her tragic death on September 14, 1982, of injuries from a car accident. “Even in Hollywood, my private life was pretty much my own. When I married, my private life became public and I really had no privacy at all — and that was an adjustment to make.”

In addition to her royal duties as Princess Grace, the former actress also became dedicated to raising her three children — Princess Caroline born in 1957, Prince Albert in 1958 and Princess Stéphanie in 1965. “People here live each day as it comes a little bit more and they aren’t in such a hurry and such a rush,” she said of her life in Monaco.

That sense of calm was juxtaposed by the stress of the extreme media attention on her life. “If you believe some of the things, I would have had at least 52 babies by now. For many years, I was always expecting a baby, according to the press. Or that my husband and I are constantly being divorced, which is also not the case,” she said in that final interview. “As far as my husband and I are concerned, we are public figures and we have to expect that.”

While she tried to keep the details of her private life to herself, one thing that was clear was her dedication to her husband — who died in 2005 — from the day she decided to marry him. “I told the Prince that we're not impressed by royalty,” she said of her and her father before she married Prince Rainier, according to the New York Times. “We're impressed by the man. Marriage is not a game of musical chairs with us. We play for keeps.” And that she did. 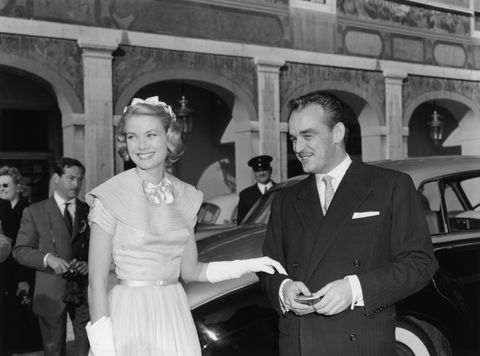