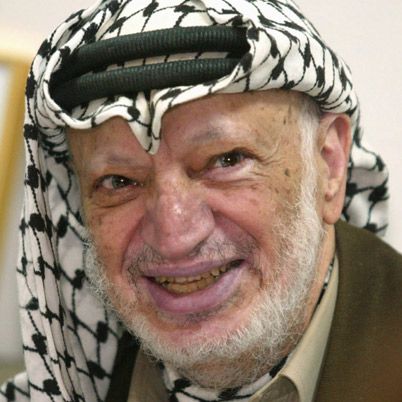 Born in Cairo in 1929, Yasser Arafat was named chairman of the Palestine Liberation Organization 40 years later. From this post, he was at the forefront of years of violence, border disputes and the Palestinian liberation movement, all centering on neighboring Israel. Arafat signed a self-governing pact with Israel in 1991, at the Madrid Conference, and together with Israeli leaders made several attempts at lasting peace soon after, notably through the Oslo Accords (1993) and the Camp David Summit of 2000. Stemming from the Oslo Accords, Arafat and Israel's Yitzhak Rabin and Shimon Peres shared the Nobel Peace Prize, but the terms were never implemented. Arafat ceded his PLO chairman post in 2003, and died in Paris in 2004. In November 2013, Swiss researchers released a report containing evidence suggesting that his death was the result of poisoning.

Born in Cairo, Egypt, in 1929, Yasser Arafat was sent to live with his mother’s brother in Jerusalem when his mother died in 1933. After spending four years in Jerusalem, Arafat returned to Cairo to be with his father, with whom Arafat never had close ties. (Arafat did not attend his father's 1952 funeral.)

In Cairo, while still a teenager, Arafat began smuggling weapons to Palestine to be used against the Jews and British, the latter of which had an administrative role in the Palestinian lands. Playing a part that he would inhabit his entire life, Arafat left the University of Faud I (later Cairo University) to fight against the Jews during the 1948 Arab-Israeli War, which resulted in the establishment of the state of Israel when the Jews prevailed.

In 1958, Arafat and some associates founded Al-Fatah, an underground network that advocated armed resistance against Israel. By the mid-1960s, the group had congealed enough that Arafat left Kuwait, becoming a full-time revolutionary and staging raids into Israel.

The year 1964 was seminal for Arafat, marking the founding of the Palestine Liberation Organization (PLO), which brought together a number of groups working toward a free Palestinian state. Three years later, the Six-Day War erupted, with Israel once again pitted against the Arab states. Once again, Israel prevailed, and in the aftermath Arafat’s Fatah gained control of the PLO when he became the chairman of the PLO executive committee in 1969.

Moving operations to Jordan, Arafat continued to develop the PLO. Eventually expelled by King Hussein, however, Arafat moved the PLO to Lebanon, and PLO-driven bombings, shootings and assassinations against Israel and its concerns were commonplace events, both locally and regionally, notably with the 1972 murder of Israeli athletes at the Munich Olympic Games. The PLO was driven out of Lebanon in the early 1980s, and Arafat soon after launched the intifada ("tremor") protest movement against Israel occupation of the West Bank and Gaza Strip. The intifada was marked by continual violence in the streets with Israeli retaliation.

Peace on the Horizon?

The year 1988 marked a change for Arafat and the PLO, when Arafat gave a speech at the United Nations declaring that all involved parties could live together in peace. The resulting peace process led to the Oslo Accords of 1993, which allowed for Palestinian self-rule and elections in the Palestinian territory (in which Arafat was elected president). (Around this time, in 1990, Arafat, at 61 years of age, married a 27-year-old Palestinian Christian, remaining married until his dying day.)

In 1994, Arafat and Israel’s Shimon Peres and Yitzhak Rabin all received the Nobel Prize for Peace, and the following year they signed a new agreement, Oslo II, which laid the foundation for a string of peace treaties between the PLO and Israeli, including the Hebron Protocol (1997), the Wye River Memorandum (1998), the Camp David Accords (2000) and the "roadmap for peace" (2002).

Regardless of treaties and the best-laid plans between the two parties, peace was always elusive, and, after issuing a second intifada in 2000 and the terrorist attacks of September 11, 2001, Arafat was confined by Israel to his headquarters in Ramallah.

In October 2004, Arafat fell ill with flulike symptoms and, his situation worsening, was transported to Paris, France, for medical treatment. He died there the following month, on November 11.

In the years since his death, conspiracy theories regarding the true cause of Arafat's demise have abounded, many holding Israel responsible. In November 2013, researchers in Switzerland released a report revealing that tests conducted on Arafat's remains and some of his belongings support the theory that the late Egyptian leader was poisoned. Evidence from the report suggests that radioactive polonium—a highly toxic substance—had been used. Suha Arafat, Yasser Arafat's widow, supported the findings in media interviews as proof of Arafat's murder. Other authorities, including a Russian medical investigation team called to the case, have maintained that they believe Arafat died of natural causes.