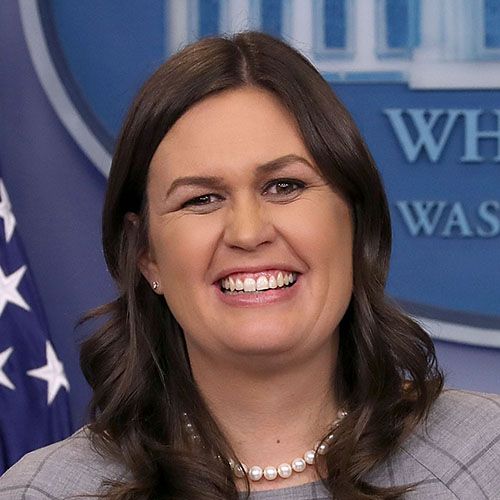 Who Is Sarah Huckabee Sanders?

Sarah Huckabee Sanders earned an early introduction to politics by campaigning for dad Mike Huckabee, who became Arkansas governor in 1996. She served as national political director for her father's 2008 presidential bid, eventually moving on to prominent roles for Senate hopeful John Boozman in 2010 and presidential candidate Tim Pawlenty in 2012. After joining Donald Trump's successful presidential campaign in 2016, Sanders served as White House press secretary from July 2017 through June 2019.

Sarah Elizabeth Huckabee Sanders was born on August 13, 1982, in Hope, Arkansas, the youngest of three children of Janet and Mike Huckabee. Her father became a well-known figure locally as a Baptist pastor, and his first statewide run for office, as a U.S. senator in 1992, also marked 9-year-old Sanders' introduction to politics. Mike Huckabee lost that bid, but he won a special election for lieutenant governor in 1993 and successfully defended his seat the following year, with Sanders taking part all the while by canvassing, mailing fliers and installing signs. By the time her father was elected to his first full term as Arkansas governor in 1998, the 16-year-old Sanders was a seasoned campaign veteran.

Building on her political upbringing, Sanders joined the mock trial and debate clubs at Arkansas' Little Rock Central High School, also serving as secretary of the state's Federation of Teenage Republicans during this time. She then followed in her father's footsteps by enrolling at Ouachita Baptist University in Arkadelphia, Arkansas, becoming a member of the Student Senate while pursuing a major in political science and a minor in mass communications, before graduating with her Bachelor of Arts in 2004.

After serving as a field coordinator for the George W. Bush reelection campaign in 2004, Sanders spent the next few years with the U.S. Department of Education in Washington, D.C. By 2007, she was back on the trail as the national political director for her father's upstart presidential bid, which claimed a surprising win in the Iowa caucus before fizzling out.

Recognizing her talents, Arkansas Congressman John Boozman tapped Sanders to manage his successful Senate campaign in 2010. She then became a senior adviser for Tim Pawlenty's 2012 presidential bid, and went on to aid fellow Arkansan Tom Cotton's quest for a Senate seat in 2014. The following year, Sanders rejoined her father as manager of his presidential campaign, which failed to gain traction in a crowded Republican field.

Noting the similarities between her father's and Trump's anti-establishment campaigns, Sanders joined the Trump team in February 2016 as a senior adviser. She impressed the New York businessman with her polish, and by September, with the Republican nomination in hand, she was named to the communications team. In October, when the emergence of the Access Hollywood tape with Trump's shocking language threatened to sink the campaign, Sanders helped quiet the furor with her composed appearance on CNN, defending her boss while also pointing out Democratic candidate Hillary Clinton's shortcomings.

Named the administration's deputy press secretary just before Trump took office in January 2017, Sanders was relegated to the background while the media trained its focus on Spicer. However, she showed what she could do when thrown into the fire on May 10, 2017, the day after President Trump fired FBI Director James Comey. With Spicer away for Navy Reserve duty, Sanders calmly led the White House press briefing, noting that it was her daughter's birthday before answering for the president's headline-grabbing actions. While Trump ultimately contradicted some of her claims, Sanders was generally praised for her performance in a pressure-packed moment.

Following the sudden resignation of Sean Spicer, Sarah Huckabee Sanders was announced as the new White House press secretary on July 21, 2017, making her just the third woman to hold the position. Her first formal briefing, marked by her reading a letter to President Donald Trump from a boy nicknamed "Pickle," set the tone for a tenure marked by folksy anecdotes and an ability to sidestep controversial issues in a way that eluded her combative predecessor.

Sanders proved largely unflappable from the podium, even when presenting a shifting account of events. In February 2018, after reports surfaced that staff secretary Rob Porter had abused his ex-wives, Sanders told the press that the administration had only recently learned of the allegations, before accepting Porter's resignation. When FBI Director Christopher Wray contradicted that claim by saying the White House was aware of the allegations months in advance, Sanders held firm, saying that she was "not aware of any communication" between security personnel briefed on the matter and the West Wing staff.

Sanders also effectively reinforced many of the president's positions thanks to her ability to frame his views in less inflammatory language. In September 2017, after outspoken ESPN personality Jemele Hill called Trump a "white supremacist" on Twitter, Sanders led the response by suggesting the comments were a "fireable offense." The following July, after a redacted Justice Department application to wiretap one-time Trump campaign adviser Carter Page became public, Sanders appeared on Fox & Friends to press the point that "the president's been right all along" about the lack of collusion with Russian agents, and that it was time to end special counsel Robert Mueller's ongoing investigation into the matter.

On June 13, 2019, President Trump announced on Twitter that Sanders would be leaving her post at the end of the month. At the time, it had been 94 days since she last held a formal briefing in the White House. Sanders concluded her tenure on June 28.

Per her White House job, Sanders regularly contributed to Twitter under the handle @PressSec, delivering supporting statements of the president, videos of state visits and retweets of compliments from allies. She also posts on her personal account, @SarahHuckabee, which contains more of the usual fare of family and celebrity pics. Earlier posts, published before she became a high-profile public figure, delved more into her tastes for the restaurant chain Panera, fantasy football and the popular '90s boy band New Kids on the Block.

As the mouthpiece for the Trump administration's policies, Sanders was an easy target for talk show and sketch comedy material, with Saturday Night Live and Chelsea Handler taking aim at her comments and personal appearance. Michelle Wolf notably unloaded on Sanders while hosting the 2018 White House Correspondents Dinner, highlighting her "smoky eye," while actor-turned-artist Jim Carrey produced an untitled but likely portrait of the press secretary, calling her a "so-called Christian whose only purpose in life is to lie for the wicked." Additionally, screen grabs of Sanders' various expressions from briefings became popular fuel for online meme generators.

In August 2019, it was reported that Sanders had signed with Fox News to provide commentary across the network's on-air and digital properties.

"Fox News has been the number one news organization in the country for 17 years running and I am beyond proud to join their incredible stable of on-air contributors in providing political insights and analysis," Sanders said, per a Fox News press release.

Making her debut on Fox & Friends on September 6, Sanders showed that she intended to continue her staunch support of President Trump's policies from her new perch.

Sanders met her husband, Bryan Sanders, while she was working for her dad during the 2008 presidential race and he was a member of Kansas Senator Sam Brownback's organization; after Brownback suspended his campaign, Bryan Sanders joined the Huckabee team. The two married on May 25, 2010, in St. John, U.S. Virgin Islands, and went on to have children Scarlett, William and George. In early 2016, the husband and wife team founded the Second Street Strategies consulting firm in Little Rock.