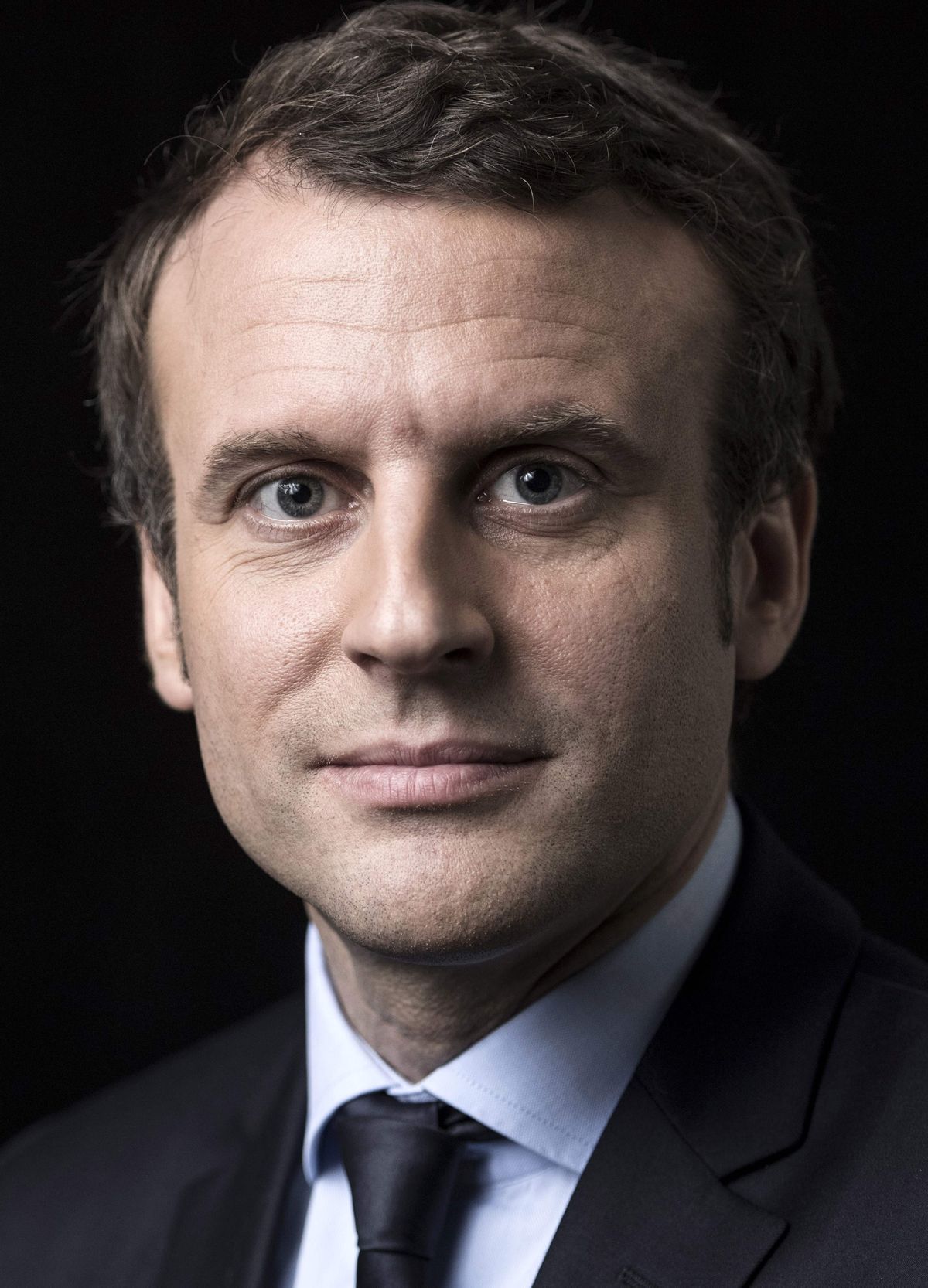 Who Is Emmanuel Macron?

Born in 1977 in northern France, Emmanuel Macron attended a series of elite schools before joining the French Finance Ministry in 2004. Following a four-year stint at an investment bank, he joined President François Hollande's staff in 2012, eventually becoming minister of economy, industry and digital data. After forming the centrist En Marche! party in 2016, Macron became a surprising frontrunner in the presidential race. He defeated National Front leader Marine Le Pen in May 2017 to become, at age 39, the youngest president in French history.

Emmanuel Jean-Michel Frédéric Macron was born on December 21, 1977, in Amiens, France. The eldest child of two doctors, Macron distinguished himself with his intellect at an early age, displaying an aptitude for literature, politics and theater.

After attending the local Jesuit school La Providence, Macron completed his high school education at the prestigious Lycée Henri IV in Paris. He went on to study philosophy at Nanterre University and public affairs at Sciences Po, before graduating from the elite École Nationale d’Administration (ENA) in 2004.

After graduation, Macron went to work for the French Finance Ministry as an inspector. Forging powerful connections, he was tapped by President Nicolas Sarkozy in 2007 to join the bipartisan Attali Commission on economic growth.

The following year, Macron left civil service for the world of investment banking at Rothschild & Co. Again demonstrating a capacity for quick learning, he rose through the ranks to become managing director, earning renown for his role in advising Nestlé's $12 billion acquisition of a division of Pfizer in 2012.

Having already developed a relationship with Socialist Party leader François Hollande, Macron became deputy secretary-general at the Elysée when Hollande was elected France's president in 2012. Tasked with economic and financial matters, he handled an early challenge by helping to broker a compromise with Germany over the ongoing eurozone crisis.

In 2014, Macron was named France's minister of economy, industry and digital data. The following year, he formulated a collection of deregulatory measures to aid the economy, but after some 200 hours of parliamentary debates, the government invoked a little-used clause to bypass the chamber and ram through what became known as "Macron's Law."

Reportedly disillusioned with the governmental procedure, and said to be at increasing odds with Hollande, Macron in 2016 formed a new centrist party called En Marche! In August, he announced he was stepping down from his role as economy minister.

In November 2016, Macron formally announced his candidacy for the 2017 presidential election. Despite having no experience as an elected official, he captured support from both the left and the right through his proposals to lower corporate and housing taxes, reform welfare and pensions and devote resources to defense, energy, the environment and transportation.

Aided by favorable media coverage and the stumbles of more experienced opponents, the 39-year-old surged to the front of the polls. The conclusion of the first round of voting on April 23 saw him finish first, ahead of Marine Le Pen of the National Front, marking the first time since the formation of the French Fifth Republic in 1958 that none of the traditional right-left parties were represented in the final round.

The presidential runoff presented a stark contrast for the electorate, with Macron espousing free trade and a strong European Union and Le Pen seizing the tide of nationalism that had swept her once controversial party into the mainstream.

Shortly before the official close of campaigning on May 5, Macron's team announced that their candidate had been subjected to a "massive and coordinated hacking operation" that resulted in personal and business documents posted to a file-sharing site. However, the data dump seemed to have little impact on the election; when the votes were tallied on May 7, Macron had garnered more than 66 percent to decisively beat Le Pen, making him the youngest president in French history.

Among other issues, President Macron faced a restructuring of regional powers following the United Kingdom's vote to withdraw from the European Union, as well as U.S. President Donald Trump's reshuffling of American interests. Shortly after the French election, Trump announced he was withdrawing the U.S. from the Paris climate accord, prompting Macron to offer France as a "second homeland" to climate researchers in order to "make our planet great again."

In December 2017, President Macron awarded long-term research grants to 18 climate scientists — 13 of whom were previously based in the U.S. — to relocate to France and continue their work.

Climate change was among the issues discussed by Macron and Xi Jinping during the French president's three-day trip to China in early 2018. The two leaders also expressed their mutual support of multilateralism, while overseeing the signing of billions of dollars in trade agreements between the countries.

Around that time, Macron came under fire for the mistreatment of migrants at the port city of Calais, following reports of searches at emergency shelters and police confiscating blankets during freezing spells. The president delivered a speech at Calais on January 16, in which he sought to reassure those who questioned his compassion and warned police about their conduct. "These are human beings to whom we have a duty of humanity," he said. "You need to be exemplary, and you need to respect the dignity of each individual."

On April 23, 2018, Macron became the first foreign leader to make a formal state visit to President Trump in Washington, D.C. Following their lengthy handshake from a previous encounter, the two men displayed a physical affection that delighted the media and spoke glowingly of one another, though their words hinted at the divide that remained on certain issues.

Trump said the U.S. and France were "beginning to understand each other" on the need to contain Iran, though he continued to criticize the nuclear deal as "insane" and "ridiculous." His French counterpart also expressed misgivings about aspects of the deal, though he said he hoped a new agreement could be forged on top of the current one.

"It’s not a mystery we did not have the same starting positions or stances, and neither you nor I have a habit of changing our stances or going with the wind," Macron told Trump during a press conference.

The two leaders also seemed to be on the same page about the need for continued military presence in Syria, though Macron indicated that they were still searching for common ground on the topic of environmentalism. "It is together that we will be able to act effectively for our planet," he said. "I'm not just referring to climate, but also to the oceans, to biodiversity, and to all forms of pollutions. On this issue, we do not always agree as to the solutions, but in the end, such is the case in any family and in any friendship."

In a speech to the joint houses of Congress on April 26, Macron celebrated the "unbreakable bonds" of the U.S. and France, and urged his hosts to remain committed to the Iran nuclear deal. He made a plea for stronger environmental efforts through a twist on the Trump mantra, saying it was time to make the Earth great again. But Macron also delivered what some interpreted as a rebuke of Trump's America-first agenda, arguing that isolationism, withdrawal and nationalism "will not stop the evolution of the world. It will not douse but inflame the fears of our citizens."

Macron faced one of the stiffest challenges to his presidency to date when French citizens embarked on their "Yellow Vests" protests — named for their identifiable clothing — in late 2018. The movement stemmed from anger over rising fuel taxes.

Following weeks of protests, Macron in January 2019 wrote a 2,330-word letter to the public and proposed a "Great National Debate" to discuss economic ideas via a series of town halls. Regardless, the protests continued through the year.

In late April 2019, Macron held the first news conference of his presidency. Promising a "more humanist" approach, he said he would lower taxes, increase pensions and even close his alma mater, ENA, due to its perception as an elitist institution that funneled individuals from well-to-do backgrounds into the government hierarchy.

On April 15, 2019, the centuries-old Notre-Dame cathedral in Paris erupted in flames, resulting in the destruction of its roof and spire before the fire was quelled 12 hours later.

Macron seized the moment to bring his countrymen together in a televised address, calling for the iconic structure to be rebuilt in five years. "It is up to us to change this disaster into an opportunity to come together, having deeply reflected on what we have been and what we have to be and become better than we are," he said. "It is up to us to find the thread of our national project."

After hosting the G7 Summit in Biarritz that summer, Macron took center stage again in late 2019 at the second annual Paris Peace Forum. In a speech to the 30-plus heads of state and government in attendance, the president pleaded for "new ways of cooperation, new alliances" to stem the rising tide of nationalism and address global issues ranging from terrorism and cyber security to immigration and climate change.

In the early months of 2020, Macron was among the world leaders grappling with how best to contain the coronavirus pandemic. On March 12, the president announced that schools, restaurants and parks would close. However, following a seemingly casual response by the public, Macron adopted a stricter tone while addressing the nation on March 16, ordering people to remain at home for the next 15 days under the threat of punishment.

He also pledged his support for the economy by saying he would suspend rent and utility bills for struggling small businesses, adding: "No business will be allowed to fail."

Macron has drawn attention for his romantic life: While attending high school in Amiens, he fell in love with his drama teacher, Brigitte Trogneux, 24 years his senior and then a married mother of three. Their affair was put on hold when he left for Paris, but they eventually resumed their romance and married in 2007.

Macron is the only member of his immediate family who did not pursue a career in medicine; following in the footsteps of their parents, his younger brother became a cardiologist and his sister a nephrologist.