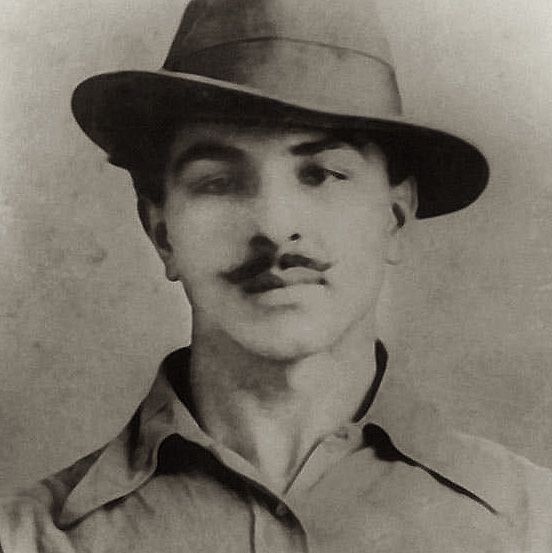 Bhagat Singh was born in Punjab, India (now Pakistan), on September 27, 1907, to a Sikh family deeply involved in political activities. He quit school at thirteen to devote his life to Indian independence. He became involved in several violent demonstrations of political defiance and was arrested several times. Singh was found guilty of killing a British police officer and hanged on March 23, 1931.

Born on September 27, 1907, to a Sikh family in Punjab, India (now Pakistan), Bhagat Singh was the second son of Kishan Singh and Vidya Vati. The family was steeped in nationalism and involved in movements for independence. At the time of Bhagat's birth, his father was in jail for political agitation.

By the time Bhagat Singh was 13, he was well familiar with this family’s revolutionary activities. His father was a supporter of Mahatma Gandhi, and after Gandhi called for boycotting government-aided institutions, Singh left school and enrolled in the National College at Lahore, where he studied European revolutionary movements. In time, he would become disenchanted with Gandhi’s non-violent crusade, believing that armed conflict was the only way to political freedom.

In 1926, Bhagat Singh founded the 'Naujavan Bharat Sabha (Youth Society of India) and joined the Hindustan Republican Association (later known as Hindustan Socialist Republican Association), where he met several prominent revolutionaries. A year later, Singh’s parents planned to have him married, a move he vehemently rejected, and he left school.

By this time, Bhagat Singh had become a person of interest to the police, and in May 1927, he was arrested for allegedly being involved in a bombing the previous October. He was released several weeks later and began to write for various revolutionary newspapers. After receiving reassurances from his parents that they wouldn’t force him to marry, he returned to Lahore.

In 1928, the British government held the Simon Commission to discuss autonomy for the Indian people. Several Indian political organizations boycotted the event because the Commission had no Indian representatives. In October, Bhagat Singh’s comrade, Lala Lajpat Rai led a march in protest against the Commission. Police attempted to disburse the large crowd, and during the melee, Rai was injured by the superintendent of police, James A. Scott. Rai died of heart complications two weeks later. The British government denied any wrongdoing.

To avenge his friend’s death, Bhagat Singh and two others plotted to kill the police superintendent, but instead shot and killed police officer John P. Saunders. Singh and his fellow conspirators escaped arrest despite a massive search to apprehend them.

In April 1929, Bhagat Singh and an associate bombed the Central Legislative Assembly in Delhi to protest implementation of the Public Safety Bill. The bombs they carried allegedly were not intended to kill but to scare (no one was killed, though there were some injuries). The bombers planned to get arrested and stand trial so they could further promote their cause.

The actions of the young revolutionaries was soundly condemned by followers of Gandhi, but Bhagat Singh was delighted to have a stage on which to promote his cause. He offered no defense during the trial but disrupted the proceedings with rants of political dogma. He was found guilty and sentenced to life in prison.

Through further investigation, the police discovered the connection between Bhagat Singh and the murder of Officer Saunders and he was rearrested. While awaiting trial, he led a hunger strike in prison. Eventually, Singh and his co-conspirators were tried and sentenced to hang. He was executed on March 23, 1931. It is said that he kissed the hangman’s noose before it was placed around his neck. His death brought mixed emotions throughout India. Followers of Gandhi felt that he was too radical and hurt the quest for freedom, while his supporters considered him a martyr. Singh remains a significant, though controversial, figure in India’s independence movement.