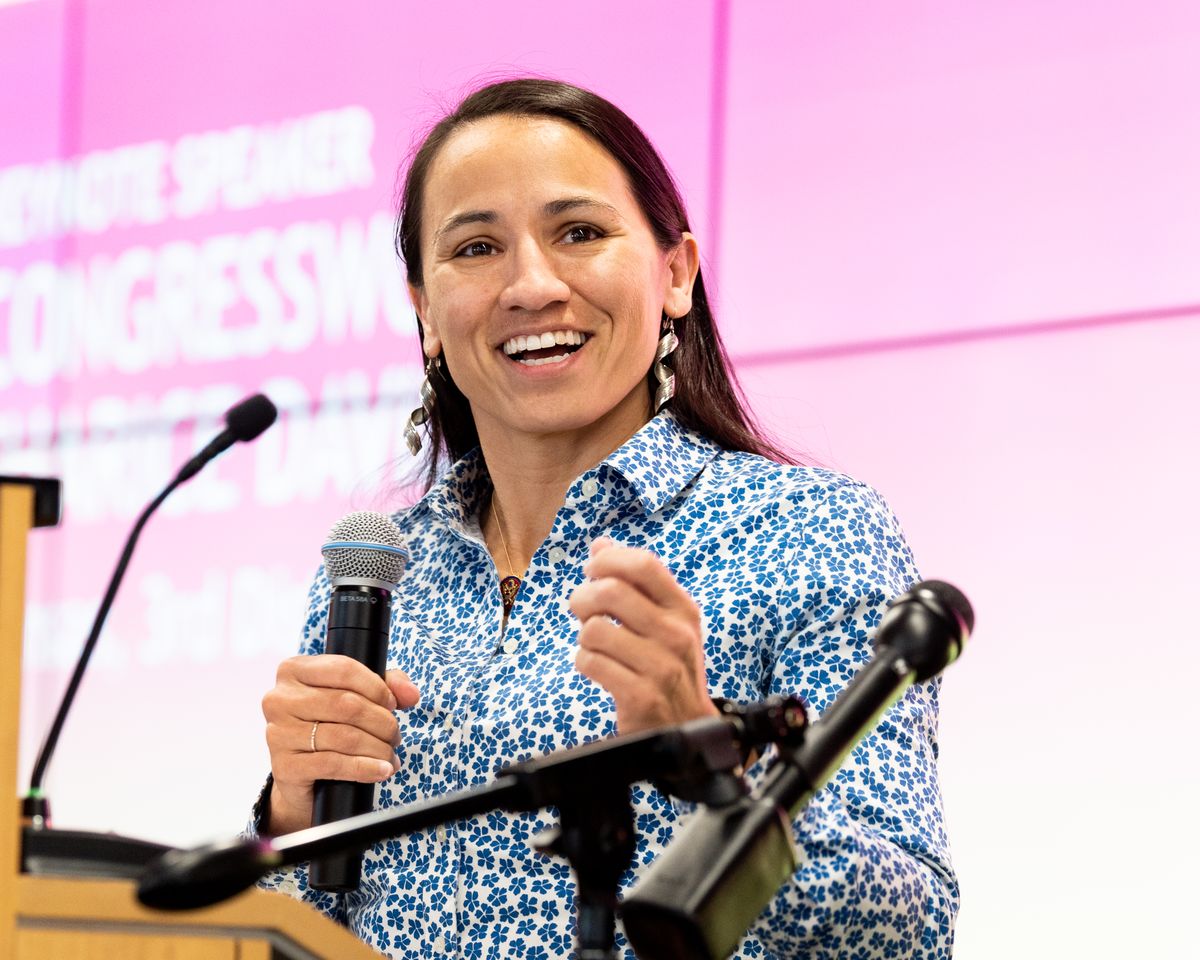 Who Is Sharice Davids?

Before representing Kansas’s 3rd Congressional District, Sharice Davids was a mixed martial arts fighter, lawyer and White House fellow. Davids defeated a Republican congressman in 2018 as part of a Democratic wave that saw the party retake the U.S. House of Representatives. She was re-elected in 2020 and again in 2022 and is currently the only Democrat in Kansas's congressional delegation.

Sharice Davids was born in Frankfurt, Germany, on May 22, 1980, to a single mother who served 20 years in the U.S. Army. Her passion for martial arts was apparent early in her childhood. She loved Bruce Lee and would wear a black belt around the house while practicing his kicks. (She even took a taekwondo class, but had to stop because the training was too expensive.)

Davids graduated from Leavenworth High School in Leavenworth, Kansas, before earning degrees from Johnson County Community College in Overland Park, Kansas, and the University of Missouri-Kansas City. While attending college, she resumed martial arts training and took classes in karate and capoeira.

Davids earned her law degree from Cornell Law School. A member of the Ho-Chunk Nation in Wisconsin, she worked on economic development projects with Native American tribes. While attending law school, she competed as an amateur MMA fighter and eventually tried competing as a professional in the UFC’s strawweight division.

In 2016, Davids became a White House fellow, where she worked in the U.S. Department of Transportation under Anthony Foxx, Transportation Secretary under President Barack Obama. With her fellowship wrapping up in the first few months of the Trump administration, she became concerned that progress on issues including the environment and gay rights could regress under President Donald Trump. That concern helped motivate her to use politics to counter the new president’s agenda.

“We had to focus on getting more people elected to decision-making positions because that’s the way that we offset someone who wants to destroy the EPA being appointed to run the EPA,” Davids told The New York Times in 2018, referring to Trump’s first EPA administrator, Scott Pruitt.

Davids ran to represent suburban Kansas City in Congress that year. She was one of more than 400 candidates running for office across the nation who were gay, lesbian, bisexual or transgender, which some called a “rainbow wave.”

"Having LGBT people sitting in the room while decisions are being made, and sitting there as peers, will shift the conversation,” she said during her campaign. “I think it’s important that the lived experiences and the point of view of LGBT folks be included in conversations that affect all of us.”

In 2020, she defeated Republican Amanda Adkins by a nearly identical margin as her first victory. But Republicans made Davids' congressional district more challenging in 2022, adding rural counties and Republican voters during redistricting.

In the wake of the Supreme Court decision overturning Roe v. Wade, Davids touted her support for abortion rights in sync with most of her district. Davids also discussed the need to protect democracy and emphasized working across the aisle in Congress. (Of the bills she’s introduced or co-sponsored, nearly three-quarters have been bipartisan.)

In 2022, Davids won re-election against Adkins, despite the district's more conservative tilt.

“Serving in Congress right now when we are facing such serious and huge threats to our institutions, to our rights, it does feel like we are watching history in the making,” Davids said on election night. “When we look back on this moment in time decades from now, everyone in this room and everyone who made their voices heard in this election is going to be able to say that when history called on us, this community answered proudly.”

In 2021, Davids wrote a children’s picture book, Sharice’s Big Voice: A Native Kid Becomes a Congresswoman. “Here’s what I hope our story conveys,” Davids wrote in an author’s note. “That each of us has our path–and the most important thing in the world is to be true to your own journey.”