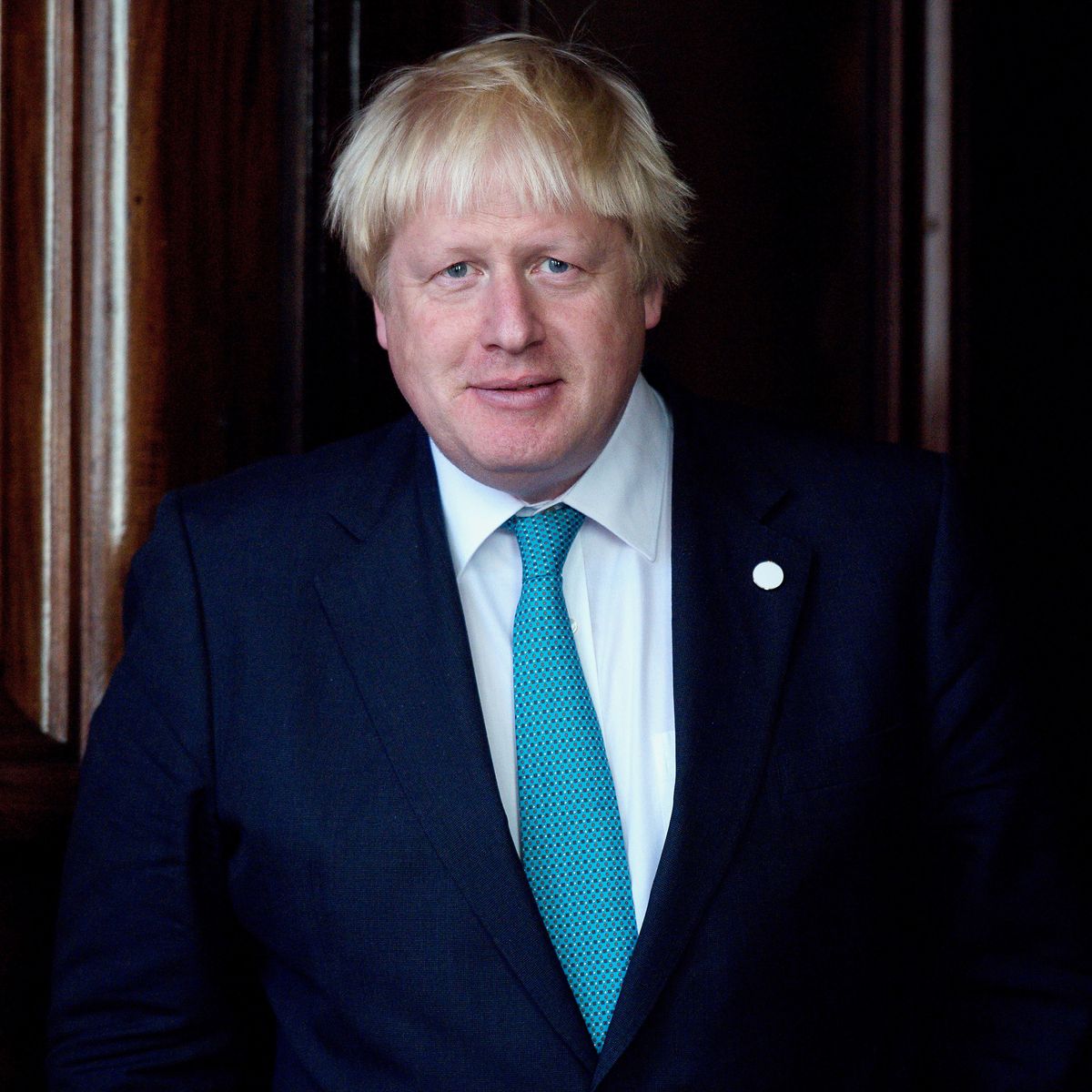 Who Is Boris Johnson?

After beginning his career as a journalist, Boris Johnson became a prominent editor while simultaneously building his political base as a Conservative MP. A surprise winner of London's mayoral race in 2008, the famously disheveled politician championed the "Leave" movement of the Brexit referendum in 2016 before spending two years as foreign secretary. Elevated to prime minister in 2019, Johnson engineered the U.K.'s break from the European Union but was criticized for breaking Covid-19 lockdown rules and resigned his premiership in July 2022.

How Old Is Boris Johnson?

Johnson is the oldest of four children born to dad Stanley, a politician, environmentalist and author, and mom Charlotte, a painter.

His sister, Rachel, went on to earn acclaim as a journalist; his middle brother, Jo, became a member of Parliament and government minister; and his youngest brother, Leo, embarked on a career in finance. Johnson also has two half-siblings, Maximilian and Julia, from Stanley's second marriage.

Thanks to his father's varied professional pursuits, Johnson moved 32 times by age 14. The family's travels included stops in London, where Johnson attended Primrose Hill Primary School, and Brussels, where he was enrolled at the European School.

Affected by a medical condition known as "glue ear," which left him partially deaf until around age eight, Johnson was said to be a quiet, studious boy. He began emerging from his shell after being sent away to Ashdown House, a boarding school in East Sussex, where he studied ancient Greek and Latin and developed a love for rugby.

At Eton College, Johnson dropped his first name and honed a more extroverted personality. He headed the debate society, was named captain of school and joined the exclusive "Pop" club, though he also rankled faculty to the point where one housemaster criticized his "disgracefully cavalier attitude."

After a gap year spent teaching in Australia, Johnson returned to England to study classics at the University of Oxford's Balliol College. A standout among fellow future stars, he became president of the Oxford Union, co-edited the satirical publication Tributary and joined the Bullingdon Club before earning an upper second-class degree in 1987.

Johnson began his journalism career as a graduate trainee for The Times but was fired the following year after attributing a fabricated quote to his godfather, renowned academic Colin Lucas.

Landing on his feet as the Brussels correspondent for The Daily Telegraph, Johnson carved out a reputation for his exaggerated but entertaining critiques of the European Commission. He later likened the experience to "chucking these rocks over the garden wall and [listening] to this amazing crash from the greenhouse next door over in England."

Johnson served as the Telegraph's chief political columnist and an assistant editor from 1994-99 and then as editor of The Spectator, a right-wing magazine, until 2005. During this time, he also began writing a regular automotive column for GQ and saw his celebrity grow via well-received appearances on the popular quiz show "Have I Got News for You."

Johnson also launched his political career as a Conservative MP from Henley, Oxfordshire, in 2001. Forced from his position as party vice-chair and shadow arts minister after lying about an affair in 2004, he rebounded to win reelection the following year and became shadow higher education minister under Conservative leader David Cameron.

Named the Tory candidate for London mayor in 2007, Johnson earned his first taste of international attention for his disheveled appearance and energetic but bumbling ways. He ultimately defeated the Labour incumbent, Ken Livingstone, to become the city's second elected mayor in 2008.

Recovering from a chaotic start in which several top aides resigned, Johnson introduced the "Boris bikes" cycle-sharing program in 2010 and the new-and-improved "Boris bus" fleet in early 2012.

Although he was criticized for his response to the 2011 London riots, he held on to defeat Livingstone and earn a second term in office in 2012.

Johnson subsequently saw the completion of the ArcelorMittal Orbit observation tower and Emirates Air Line cable cars in time for the 2012 London Olympics, which provided the lasting image of the mayor stuck on a zip line above Victoria Park. Other ambitious projects, such as the "Boris island" airport and garden bridge over the River Thames, never came to fruition despite his efforts.

Along with taking on another elected post as MP of Uxbridge and South Ruislip in 2015, Johnson spent his final weeks as mayor engaged in the contentious issue of Brexit, a referendum on whether to continue the United Kingdom’s membership in the European Union.

Initially unsure which side to take, Johnson eventually emerged as the face of the "Leave" campaign, in direct opposition to Prime Minister Cameron. His populist message for an independent U.K. resonated with the public, resulting in the electorate's historic vote to leave the E.U. on June 23, 2016.

Johnson subsequently launched a bid to replace Cameron as the Conservative leader but bowed out by the end of June, paving the way for Theresa May to take over as prime minister.

Named May's secretary of state for foreign and Commonwealth affairs in July 2016, Johnson soon ran into trouble with his off-the-cuff commentary. After initially defending the sale of arms to Saudi Arabia, he accused the Middle Eastern country of "puppeteering and playing proxy wars." Later, his incorrect assessment that a British-Iranian national was "teaching" when arrested for spying in Iran reportedly bolstered the accusations that she was spreading propaganda.

Johnson dutifully represented the country's interests in rebuking the alleged Russian use of a deadly nerve agent and supporting the Iran nuclear deal. But he also feuded with his boss over her attempts to negotiate the U.K.'s break from the E.U. Dismayed by the proposed compromises, Johnson stepped down as foreign secretary in July 2018.

After May resigned in May 2019 over an inability to forge a Brexit agreement, Johnson again sought control of the party leadership. This time, he emerged victorious after promising to pull out of the E.U. by October 31, regardless of whether or not a deal was in place, and took over as prime minister on July 24, 2019.

Johnson quickly found himself at odds with lawmakers after asking Queen Elizabeth II to suspend Parliament until mid-October, with critics charging that he was narrowing the opportunity for opposition to his Brexit plans. Parliament subsequently passed a bill that required the PM to request an extension for the U.K.'s departure by October 19 if he was unable to broker an agreement with the E.U. or earn the necessary consent for a no-deal Brexit.

While Johnson was forced to seek the extension, he was successful in bringing his case to the people with a snap election. Riding the slogan "get Brexit done," the Conservative Party proved the decisive winner in the December 2019 general election, giving Johnson time to fine-tune the minutiae of a final deal after the country's formal exit from the E.U. on January 31, 2020.

Meanwhile, a new crisis emerged that year with the rapid onset of the Covid-19 pandemic. Initially reluctant to curb the flow of business and public interaction, Johnson finally announced the closure of stores and restaurants on March 20 before imposing strict lockdown measures a few days later. He then landed in intensive care after contracting the virus at the end of the month.

Although the U.K. became the first Western nation to greenlight a vaccine in December 2020, it also became the first European nation to surpass 100,000 casualties from the illness in January 2021. Later that year, a report slammed the "public health failures" in the country brought about by governmental delays in enacting social distancing guidelines.

Johnson’s problems compounded by April 2022 when he was fined for breaking lockdown rules. The following month, he was named a primary culprit in a series of lockdown-defying social gatherings among government employees, a scandal dubbed "Partygate."

After he survived a no-confidence vote from party members in June, the revelation that Johnson was aware of sexual misconduct allegations against deputy chief whip Chris Pincher triggered a wave of government resignations headlined by Chancellor Rishi Sunak and Health Secretary Sajid Javid. On July 7, 2022, Johnson bowed to the pressure to resign as prime minister.

Although former Foreign Secretary Liz Truss took over as party leader and premier, she, too, resigned less than two months later after several public missteps. Initially interested in reclaiming the job, Johnson withdrew his name from consideration shortly before Sunak was announced as the new PM on October 24, 2022.

Johnson has authored several books, dating back to his tales from the campaign trail with Friends, Voters, Countrymen (2001). Other works include the novel Seventy-Two Virgins (2003); an examination of antiquity with The Dream of Rome (2006); a book of poetry and illustrations with The Perils of the Pushy Parents (2007); and the biography The Churchill Factor (2014).

Johnson has been married three times and fathered seven children. After meeting Allegra Mostyn-Owen at Oxford, the two were married in 1987 before having the union annulled in 1993. That year Johnson wed lawyer Marina Wheeler, with whom he had daughters Lara and Cassia and sons Milo and Theodore.

Following the revelation that he had another daughter, Stephanie, with journalist Helen MacIntyre, Johnson and Wheeler divorced in 2018. The prime minister then married public relations executive Carrie Symonds in 2021 and added to his family with son Wilfred and daughter Romy.