In February 2007, U.S. astronaut Lisa Nowak drove from Houston, Texas, to Orlando, Florida, to confront the woman who'd won the affections of an astronaut that Nowak had been involved with. Instead of having the conversation she claimed she'd wanted, Nowak was arrested for attacking the other woman. A story about the space program and an out-of-control love triangle would naturally capture attention, but the reported detail that Nowak wore diapers on her 900-mile drive in order to avoid bathroom breaks transformed the incident into irresistible fodder for tabloids and late-night talk shows alike (though Nowak's attorney would later insist his client never put on diapers). Nowak was an inspiration the 2019 film Lucy in the Sky, which stars Natalie Portman as an astronaut named Lucy Cola.

Nowak was able to balance a successful career and family

Nowak first became interested in space when she was five years old. "I remember the moon landing and watching those astronauts, and I thought that was very exciting," she said in a 2005 interview. She studied aerospace engineering at the United States Naval Academy and went on to receive a master's degree in aeronautical engineering. In 1996, Nowak made it through the competitive selection process to become an astronaut. She traveled to space as a mission specialist on the shuttle Discovery in July 2006.

Being an astronaut is a demanding profession but her job didn't keep Nowak from starting a family. She married Richard, a classmate from the Naval Academy and they had three children (a son and twin girls). Nowak took pride in both having a family and staying on course in the space program, saying in one interview, "It’s definitely a challenge to do the flying and take care of even one child and do all the other things you have to do. But I learned that you can do it."

In 2004, Nowak began an affair with a fellow astronaut

Yet behind the facade problems existed in Nowak's personal life. In 2004, before she'd made it into space, she began an affair with fellow astronaut William Oefelein. (Oefelein trained with Nowak but the two did not go into space at the same time.) In 2005, Oefelein divorced his wife. After 19 years of marriage, Nowak and her husband separated early in 2007. At the time she seems to have envisioned a future with Oefelein.

However, in mid-January 2007 Oefelein let Nowak know he was in an exclusive relationship with Air Force Captain Colleen Shipman. Oefelein later told investigators he thought Nowak was "disappointed" but "accepting" of the news. But Nowak ended up using a key Oefelein had given her to enter his apartment, where she accessed personal emails between Oefelein and Shipman. In one, Shipman wrote, "Will have to control myself when I see you. First urge will be to rip your clothes off, throw you on the ground and love the hell out of you."

Nowak then proceeded with the trip that would result in headlines dubbing her an "astro-nut." 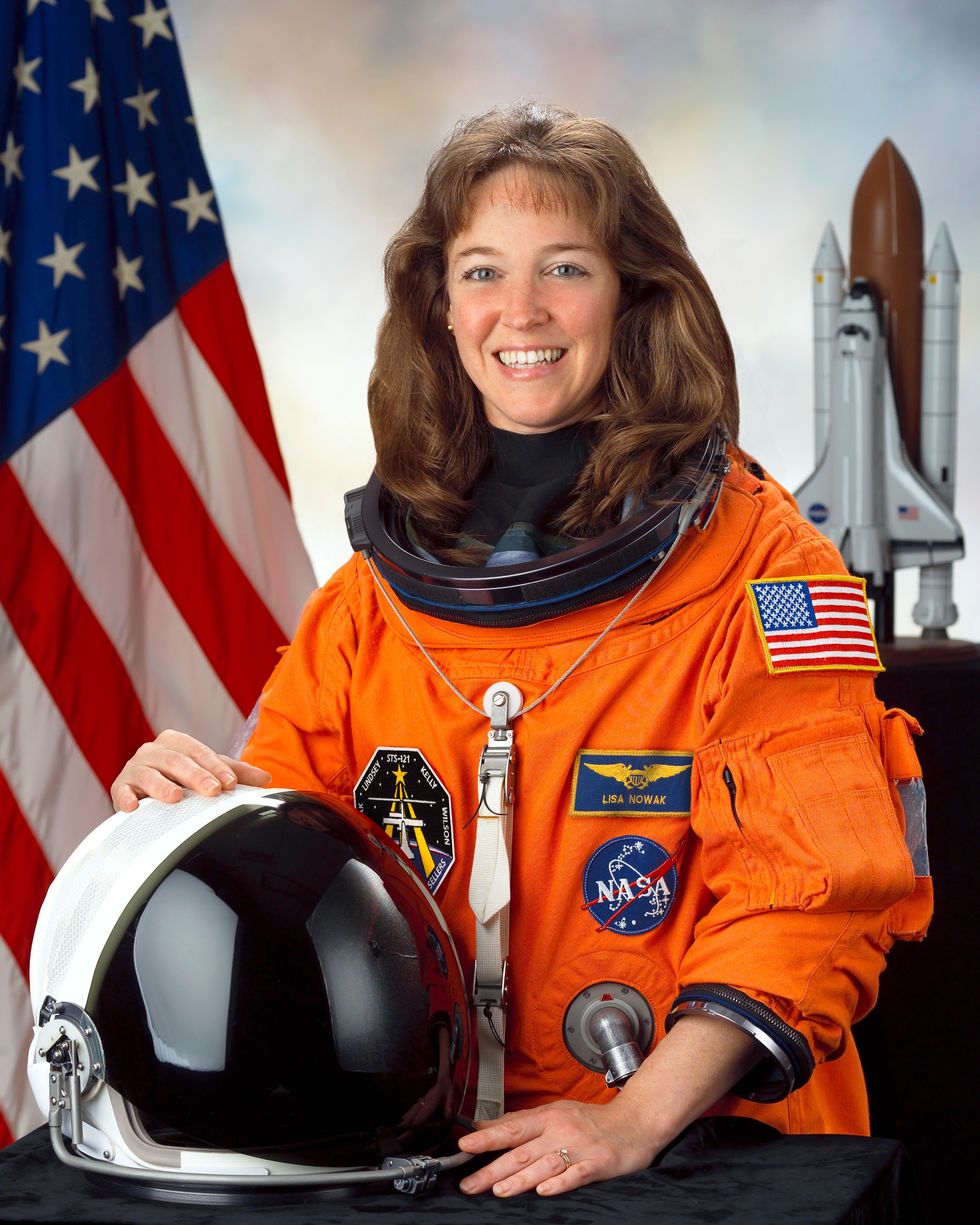 Having learned the details of Shipman's return flight from Houston to Orlando thanks to her time in Oefelein's apartment, Nowak made the same 900-mile journey by car and ended up at Orlando International Airport. She then kept watch as Shipman, who'd been visiting Oefelein, got in around 1 a.m. on February 5.

Shipman spent a couple of hours waiting for delayed luggage before taking a shuttle bus to parking. Nowak, wearing a wig and trench coat, rode with her. Shipman spotted Nowak, whose attire made her look out of place, and hurried to her car. Nowak then approached Shipman, claimed her boyfriend hadn't shown up and asked for a ride. Not letting Nowak into her car, Shipman offered to call for help. When Shipman slightly opened her car window, Nowak allegedly pepper-sprayed her.

Fortunately, Shipman was able to drive away and the police apprehended Nowak. Investigators found hundreds of dollars in cash, print-outs of personal emails between Oefelein and Shipman, pepper spray, a knife, rubber tubing, gloves, a BB gun, a mallet and a computer disk that held images of bondage scenes in Nowak's belongings. Her car reportedly also contained diapers — however, these apparently weren't special NASA diapers. Nowak's attorney would later claim there were toddler diapers in her car due to her family's evacuation during the 2005 hurricane season.

As the police had Nowak's identification, they told Shipman her name. It sounded familiar — she and Oefelein had discussed his ex, and Oefelein had once mistakenly called her "Lisa" in bed — so Shipman phoned her boyfriend to confirm the connection. Meanwhile, though she was in police custody, Nowak remained focused on talking to Shipman.

There's no definitive explanation for Nowak's choices. However, some of those close to her speculated that the Columbia shuttle disaster may have played a part in her breakdown. On February 1, 2003, the returning shuttle Columbia was completely destroyed after a piece of foam broke off and hit the ship's wing. Seven astronauts on board lost their lives, including Nowak's close friend Laurel Clark.

It's easier to understand how NASA might have missed changes in Nowak's emotional state. Being propelled into space by a high-powered rocket is not a low-key endeavor, so potential astronauts face rigorous screening. Yet the many psychological tests Nowak had undergone to join the program had been back in 1996, with no regular follow-ups.

In addition, Nowak would have known that seeking aid for any problems would likely mean she'd lose her place in the program. After waiting for years to go to space, she would not have wanted to jeopardize her chances and therefore would have had every incentive to hide personal turmoil.

It's also possible that returning from her 2006 space flight affected Nowak's state of mind. She knew the mission was likely to be her only one (at the time there were many other astronauts waiting in the wings). Nowak may have had trouble readjusting after this never-to-be-repeated journey — in Lucy in the Sky, Portman's character says, "I just feel a little off. You go up there, you see the whole universe, and everything here looks so small."

Nowak pled insanity and her criminal case is now sealed

Nowak was charged with attempted kidnapping and burglary with assault, making her the first active-duty astronaut to face felony charges. NASA let Nowak go a month after she confronted Shipman; Oefelein was released by the agency in June 2007. NASA ended up instituting annual psychological screenings for astronauts.

As her case moved to trial, Nowak's legal counsel filed the paperwork for an insanity plea, claiming she'd suffered from obsessive-compulsive disorder, insomnia and depression. Then came a ruling that Nowak had not been fully advised of her rights and therefore her police interview was inadmissible in court. In the end, Nowak entered into an agreement that saw her plead guilty to burglary and misdemeanor battery. The judge, taking her status as a first-time offender into account, gave her a year of probation, community service, and directed her to write Shipman a letter of apology.

Shipman was not happy with the sentence. She told the court Nowak had intended to kill her: "It was in her eyes: a blood-chilling expression of limitless rage and glee." The crime had left Shipman with nightmares and dizzy spells; she also felt she needed weapons to protect herself. However, Nowak's actions didn't derail Shipman's relationship with Oefelein. The two both retired from the military in 2008, relocated to Alaska, married in 2010 and now share a son. Shipman also began a writing career, which helped her cope with the attack's aftereffects.

Nowak and her husband divorced in 2008. In 2011, she was given an "other than honorable" discharge from the Navy and was demoted from captain to commander when she left the service. She succeeded in having her criminal case sealed in 2011, though memories of it will live on.