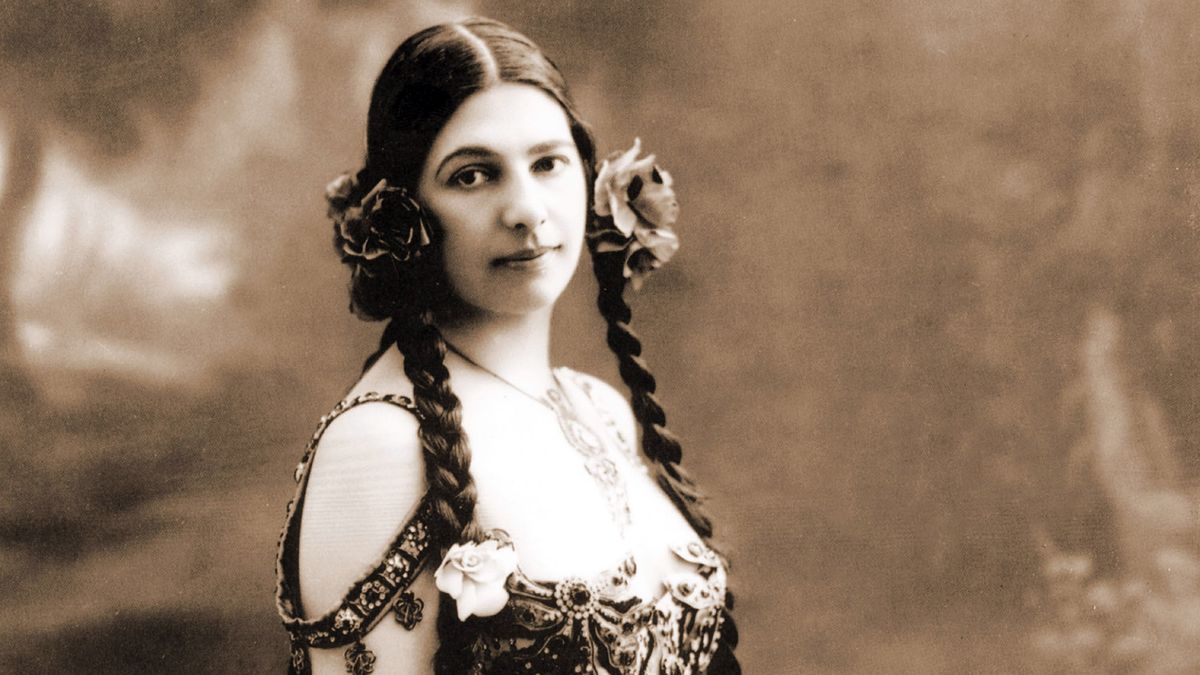 The spoiled daughter of a wealthy Dutch milliner who went belly-up and abandoned his family, Margaretha Zelle escaped an abusive early marriage to a military officer in the Dutch East Indies (now Indonesia), before moving to Paris, where she became the mistress of several well-connected men. When one of her lovers suggested she become a dancer, she reinvented herself, taking the stage name Mata Hari, a Malay word for “eye of the day” or “sunrise.” With a new name came a new biography. Capitalizing on Europe’s obsession with the Far East, Mata Hari variously claimed to be the daughter of an Indian temple dancer or to have been born in Java.

To get around prudish sensibilities, she claimed that her scintillating routines were religious dances performed in Javanese temples, allowing her awed audiences to pretend they were watching educational performances. She was soon the talk of the town, attracting a devoted following, including a legion of new lovers and admirers, and performing in the capitals of Europe. 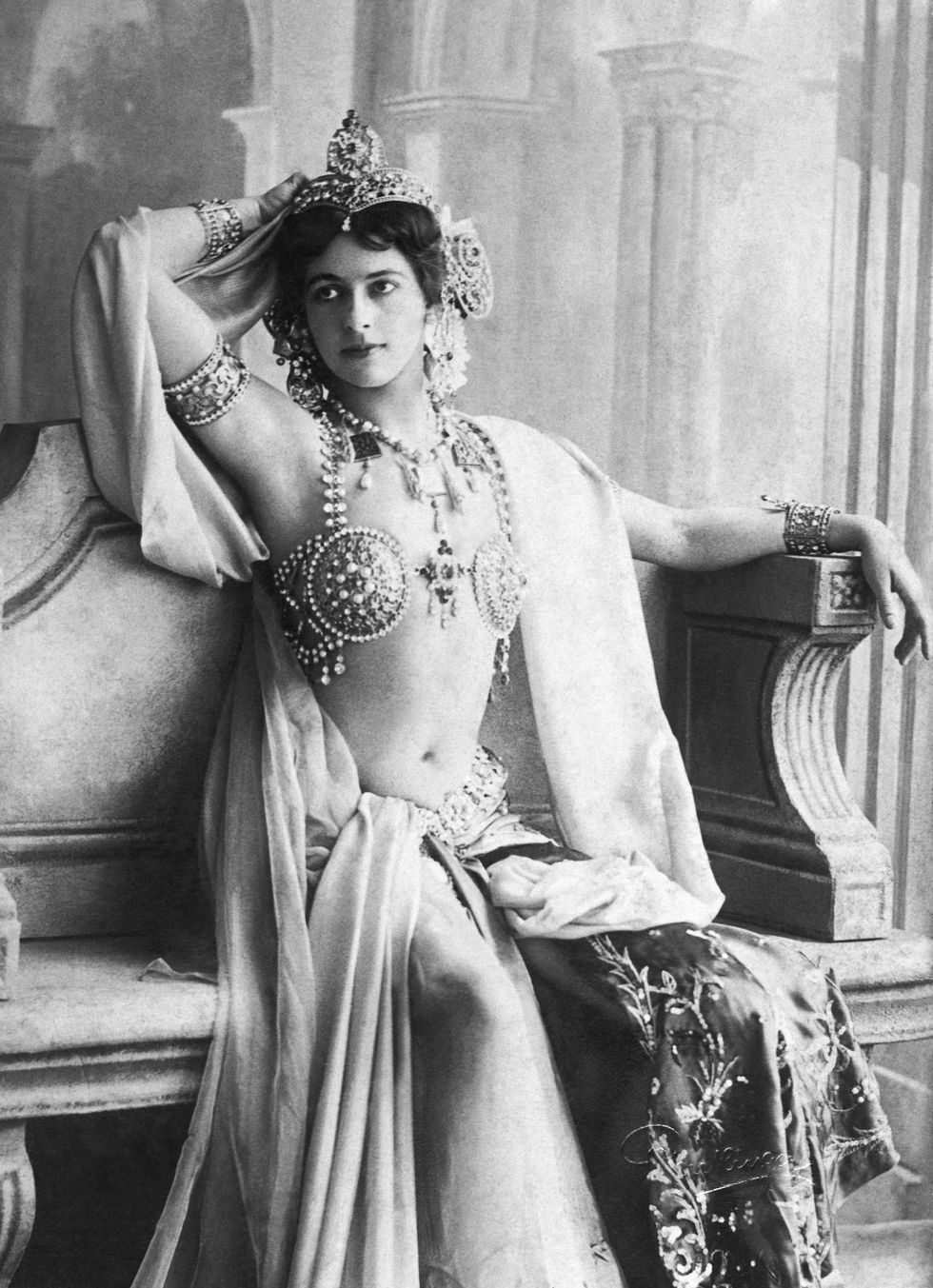 Her fame made her an easy target during World War I

A Dutch native, she was able to travel freely and continued her extravagant lifestyle — as well as affairs with men on both sides of the conflict. While in The Hague in 1915, she was approached by a German diplomat who offered her the modern-day equivalent of $61,000 to spy for Germany. Although she accepted the money and it would later be used against her in her espionage trial, she denied having done any actual spying for Germany and claimed she took the money as reimbursement for personal items that had been confiscated by Germany when the war began. Returning to Paris, she attracted the attention of Georges Ladoux, France’s counterespionage chief, who had her put under surveillance but could find no evidence of her spying.

In 1916, nearing 40 and with her dancing career winding down and her financial prospects dwindling, Mata Hari fell in love with Russian officer Vladimir de Massloff. When he was wounded at the front, Mata Hari approached the War Department for a travel permit to visit him. Officials, including Ladoux, demanded that she become a French spy in exchange for money Mata Hari hoped to use to marry Massloff. She agreed but neglected to tell Ladoux that she had already agreed to spy for Germany.

Ladoux likely fabricated the evidence used in her trial

In the end, it seems Mata Hari was a woefully unsuccessful spy, whether that was by accident or on purpose. Ladoux, possibly hoping to ensnare her, gave her no instructions on who she should target as a source. And Mata Hari, perhaps unaware of the dangerous game she was playing, made no attempt to conceal her connection with Ladoux’s agency, writing him by mail and telegrams (which could have been easily intercepted) and frequently visiting his offices to demand payment.

That November, British authorities detained her while she was traveling from Spain to the Netherlands. Under harsh interrogation, she revealed she had been hired by Ladoux. Ladoux betrayed her, telling the British he had only hired her to root out her work as a German spy. Mata Hari was deported to Spain, where she began romantic relationships with both German and French military officers. When she learned of a planned German landing in Morocco from one of her paramours, she tried to get word to Ladoux.

She was unaware that Ladoux was secretly monitoring radio communications between Madrid and Berlin, in the hopes of gathering proof of her double-dealing. Ladoux used messages he claimed implicated Mata Hari to secure her arrest. Some historians believe the Germans, unhappy with her lack of intelligence gathering, may have sent fake messages naming her as a German agent to ensure her arrest by France.

The original versions of these communications have been lost. The only existing evidence are versions that Ladoux personally had translated, leading to suspicions that the evidence was fabricated. Ladoux himself was later arrested and charged as a double agent but was eventually released.

Most historians believe her arrest and prosecution were purposely timed by Ladoux and French officials. 1916 had been a year of serious French setbacks on the Western Front, which left soldiers demoralized and even unwilling to fight. Mata Hari’s flamboyant lifestyle and amorous past made her an easy target — especially in comparison with the women of France who were making enormous wartime sacrifices, including their husbands and sons.

Mata Hari was arrested in February 1917. She was held in increasingly punitive conditions and only allowed to meet with her elderly lawyer, a former lover with no experience in military tribunals. She underwent harsh interrogations by prosecutor Pierre Bouchardon, eventually admitting she had accepted money — but never spied — from Germany. Adding to the difficulties was her congenital habit of spinning tales about her own life, causing her to give conflicting (and potentially damaging) statements.

At her trial, prosecutors claimed that the intelligence she had delivered was directly responsible for the deaths of tens of thousands of Allied soldiers. But they were unable to present any direct evidence of her spying, instead repeatedly using her presumed lack of morals as evidence of her low character. Bouchardon noted, “Without scruples, accustomed to make use of men, she is the type of woman who is born to be a spy.” The all-male tribunal convicted her in just 45 minutes.

Still proclaiming her innocence, Mata Hari was executed by firing squad on October 15, 1917.

Within months of her death, the first biography of Mata Hari was published. Since then, she has been the subject of hundreds of books and essays. Greta Garbo starred in a 1931 film loosely based on her life, which was a box-office sensation but was heavily censored after its release to remove some of its more “salacious” details. Her story has also been featured in plays, musicals and even a ballet and an opera, and she’s considered the inspiration for any number of femme fatale characters. Yet historians continue to debate whether or not she was truly a covert double agent — or merely a victim caught up in a swirl of sexism, intrigue and wartime propaganda.