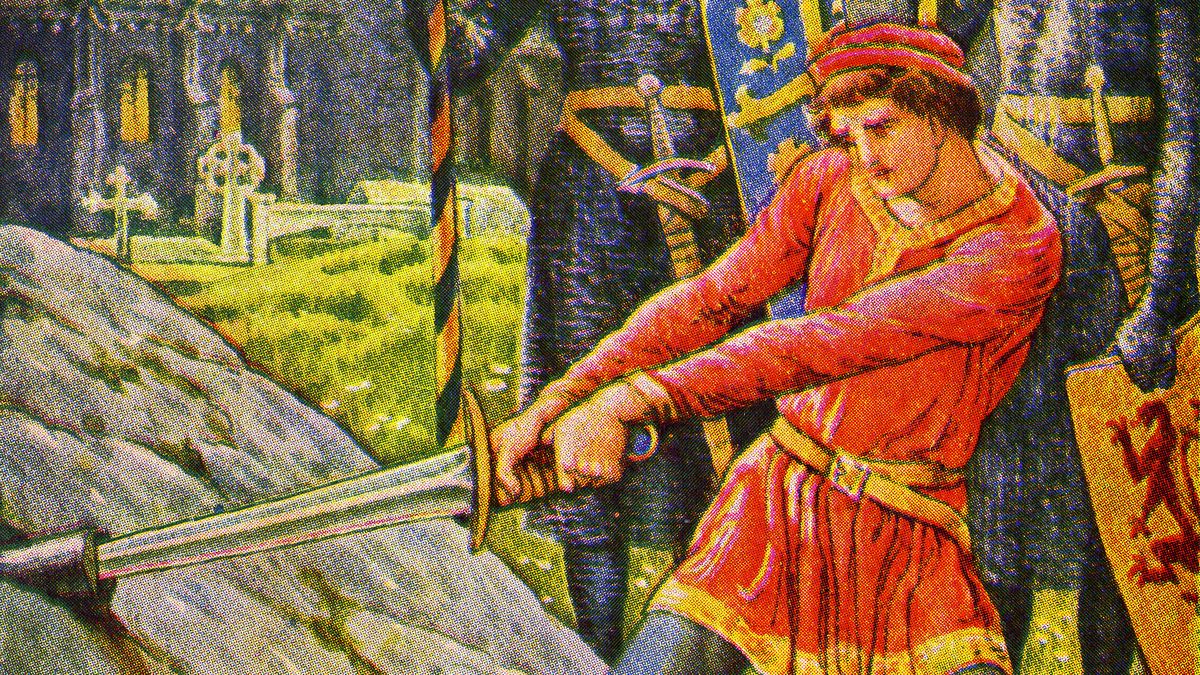 The legend of King Arthur, Camelot and the Knights of the Round Table have captivated readers for more than a millennium. Growing out of the chaos of the post-Roman occupation of Britain, the stories offered a rallying point and origin story of British might and power. Many continue to search for evidence and clues proving the existence of King Arthur, while others believe the legendary tales are just that, and that Arthur was likely an amalgamation based on several figures of the era.

Likely the first written account to mention the figure we now know as King Arthur was composed in the sixth century by Welsh monk named Gildas, in a work about the Roman conquest of Britain and its aftermath. In his account, a Roman-British military leader named Ambrosius Aurelianus wins a series of battles against the invading Saxons, most notably at Badon Hill.

Some 200 years later, Arthur appears again, this time in the work of ninth-century historian Nennius, who compiled a series of works called the History of the Britons. According to Nennius, Arthur won 12 surprising victories over the Saxons, including at Badon. But while he was a masterful military leader, Nennius does not say that he was a king. Historians and archaeologists have also struggled to identity the present-day locations where Arthur is presumed to have fought, leading many to believe that even at this early stage much of Arthur’s story had taken on mythical tones — thanks in part to Nennius’ claims that Arthur singlehandedly killed more than 900 Saxons at the Battle of Badon. 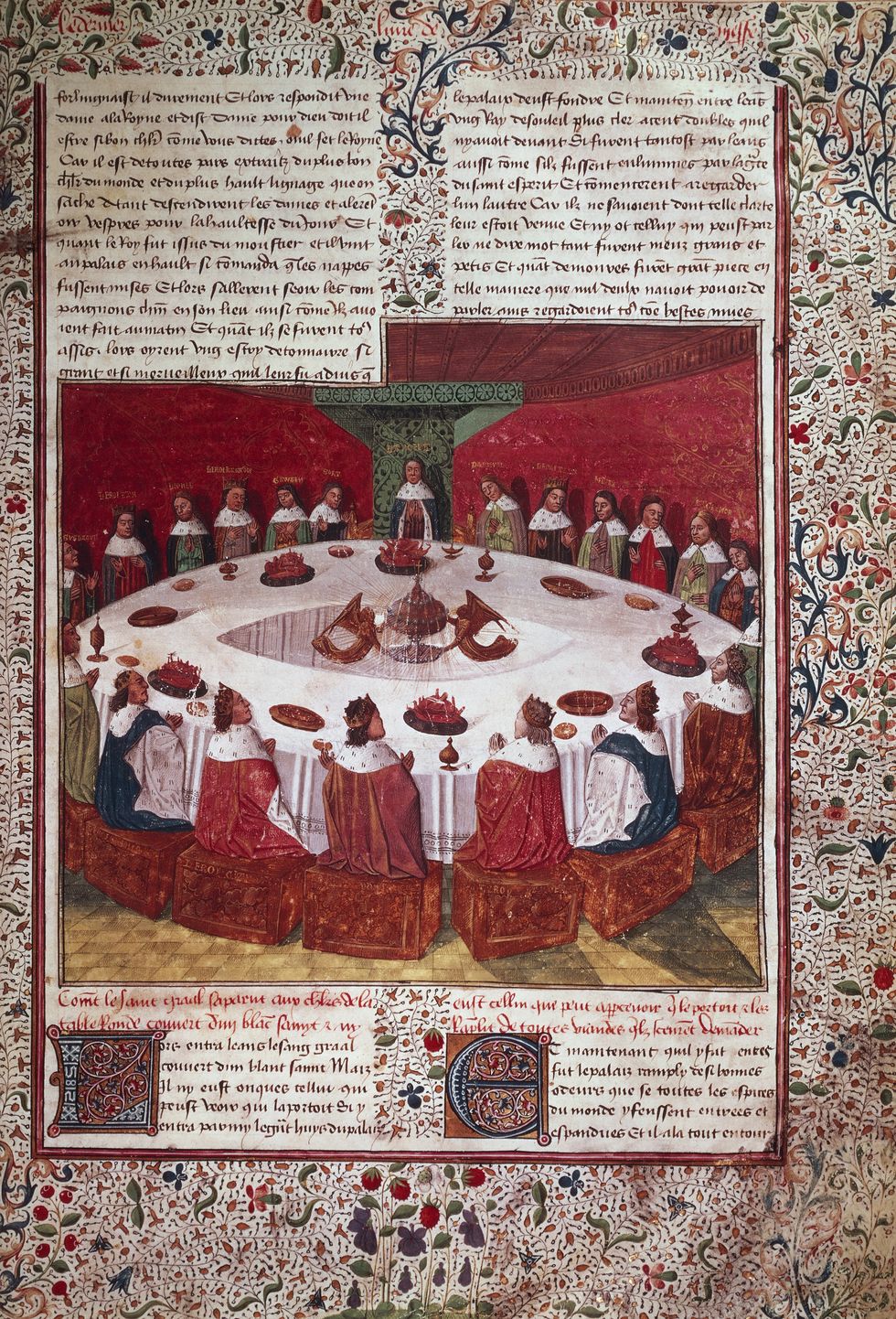 A vision of the Grail, Arthur and the Knights of the Round Table
Photo: DeAgostini/Getty Images

In 1136 CE, some 500 years after Arthur would have lived, British cleric Geoffrey of Monmouth completed his History of the Kings of Britain, tracing British history through the early seventh century. It’s in this book that the military leader Arthur gets an upgrade to king. Geoffrey also gives the first full account of Arthur’s life, including his birth at Tintagel Castle (in present-day North Cornwall, England), rise to the throne as a teenager following his father’s death and his victorious battles against the Saxons.

It was Geoffrey of Monmouth who also introduced figures who would become central to the Arthurian legend, including Ganhumara, or Guinevere, Arthur’s wife and queen, the wizard Merlin and the enchantress Morgan (later known as Morgan le Fay), who heals Arthur after he is mortally wounded in battle and brought to Avalon. Mordred, whose relationship to Arthur shifted as the Arthurian legend later grew, is depicted as Arthur’s duplicitous nephew who usurps both the throne and Arthur’s wife while Arthur is away at war, in Geoffrey’s account.

Geoffrey’s work is also the first to mention Arthur’s powerful sword, although it’s known as Caliburn, not yet Excalibur.

Geoffrey’s book, written in Latin but translated into several languages, was a popular success, but even his contemporaries cast a wary eye on his scholarship. He claimed to have based much of his writing on the translation of an ancient work given to him by a fellow cleric, but he was unable, or unwilling, to show the materials to others. Many modern historians, pointing to the lack of archaeological evidence to support Geoffrey’s version of history, believe that Geoffrey, like Nennius and others before him, likely attributed to Arthur the biographical details and military victories of several different men to create a composite Celtic superhero of sorts.

Among the historical figures who may have influenced Geoffrey were Magnus Maximus, a Roman officer in Britain who launched an attack on Gaul, Cassivellaunus, a first-century BC warrior who led an uprising against the Romans in Britain, and Arvirargus, a British king from the first century AD who later married a “great beauty” who may have been the inspiration for Queen Guinevere.

The Arthurian legend blossomed during the 12th and 13th centuries

The Arthur of Geoffrey of Monmouth’s book is a brooding, violent warrior. It’s in his next incarnation that romance takes center stage, thanks to a series of Arthurian stories written in France. Writing in the last decades of the 12th century, poet Chrétien de Troyes’ works were deeply influenced by the world of medieval chivalry and courtly love and his poems introduce the character of Lancelot and his adulterous affair with Queen Guinevere. Troyes is the first Arthurian writer to name Camelot as the site of Arthur’s court and to introduce characters such as Perceval, one of Arthur’s knights whose quest for the Holy Grail used by Jesus Christ at the Last Supper would become a focal point of Arthurian legend.

Robert de Baron, another French poet, picked up on the work of Chrétien de Troyes, imbuing his three poems with deep religious symbolism, including his account of Joseph of Arimathea, a follower of Jesus who provided the tomb in which he was buried. In de Baron’s tale, the Holy Grail was used to catch Christ’s blood during his crucifixion and then was spirited away to Britain by Joseph.

Just a few decades after Chrétien de Troyes came the Vulgate cycle, a series of stories in French that were originally attributed to a Welsh clerk but were more likely composed by Cistercian monks. The romance between Lancelot and Guinevere takes center stage here, along with the life of Merlin and the death of Arthur at the hands of Mordred (this time Arthur’s illegitimate son, not his nephew). Just a few years later, the Arthurian tale got a rewrite of sorts, thanks to a group of anonymous authors who wrote the Post-Vulgate Cycle, which stripped away much of the love story to focus almost exclusively on the quest for the Holy Grail by the Knights of the Round Table (purported to be a wedding gift to Arthur from Guinevere’s father).

The most influential Arthurian was likely written in prison

Although there is some debate among historians, it’s believed that the author of Le Morte d'Arthur (The Death of Arthur) was a well-born, wealthy Englishman who frequently fell afoul of the law and likely wrote his famous work while in prison. Sir Thomas Mallory used many of the earlier Arthur stories as the basis for his book (originally titled The Whole Book of King Arthur and of His Noble Knights of the Round Table) to create the first full narrative of Arthur’s life in English. All the main character and plot points are here, including the romance, rivalry and in-fighting that would nearly bring Camelot to collapse.

Mallory’s 1485 book was a hit and was republished several times after its initial release, but the tale soon fell out of favor, and his book was unavailable until 1816, when it was reintroduced. Arriving at the height of literary and artistic period known as the Romantic era, Mallory’s book left a deep impression on British poets like Alfred Tennyson, John Keats and William Wordsworth, as well as later American writers like Mark Twain, author of the 1889 novel A Connecticut Yankee in King Arthur’s Court. Mallory’s book also became the basis for numerous illustrated versions of the Arthurian tales, tailored for both children and adults, as well as highly influential paintings, plays and even a musical, Camelot, which depicted the love triangle between Arthur, Guinevere and Lancelot, and inspired the use of the term “Camelot” by some historians in reference to the brief presidency of John F. Kennedy, whose youthful presence had inspired millions around the world.