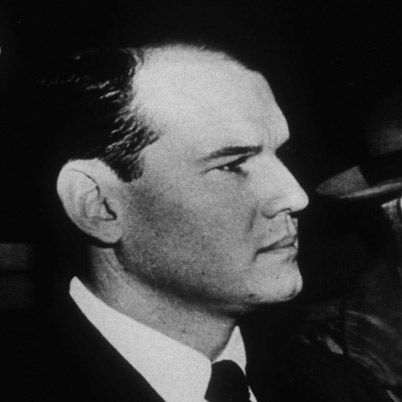 Who Was Sam Sheppard?

In 1954, Sam Sheppard’s wife Marilyn was found murdered in their home. Sheppard was convicted of the killing and sentenced to life in prison, but he maintained his innocence throughout the trial and during his incarceration. After a lengthy appeals process, in 1964 he was released from prison, and during a 1966 retrial, he was found not guilty. Afterward, Sheppard turned to alcohol and died of liver failure on April 6, 1970. The 1963 television series The Fugitive and the 1993 movie of the same name were inspired by Sheppard’s case.

Samuel Holmes Sheppard was born on December 29, 1923, in Cleveland, Ohio. He pursued a career in medicine, studying at Hanover College and Western Reserve University before moving to Los Angeles to complete his education. In 1945 Sheppard married his high school sweetheart, Marilyn, and a few years later the couple returned to Ohio.

Living in a wealthy Cleveland suburb, the Sheppards seemed to live a charmed life, until July 4, 1954, when Marilyn was found bludgeoned to death in the couple's bedroom. The murder would launch one of the longest-running and most sensationalized court cases in United States history.

In interviews with law enforcement, Sheppard claimed that after he discovered his wife’s body, he was hit on the head twice and knocked out by a "bushy-haired" assailant. But after police failed to find evidence of a break-in and Sheppard’s extramarital affair was exposed, he became the investigation’s prime suspect, and in August 1954 he was indicted by a grand jury. After the much-publicized trial and lengthy deliberation, the jury found Sheppard guilty of second-degree murder, and he was sentenced to life in prison.

Though Sheppard’s attorney argued that prejudicial publicity had made a fair trial impossible, his appeal was denied. But in 1964, after an aggressive attorney named F. Lee Bailey took up the fight, Sheppard was released from prison. A federal appeals court soon reinstated his conviction, and Sheppard was faced with a retrial. This time, without cameras and with few reporters, on November 16, 1966, the jury found Sheppard not guilty, due in large part to the mishandling of the first trial.

Upon his release, Sheppard soon turned to alcohol to ease his suffering, and his life quickly headed downhill. He died on April 6, 1970, from liver failure. After his death, his outraged son, also named Sam, was determined to find the real killer and clear his father's name. His focus turned to Richard Eberling, the Sheppards’ window washer at the time of the murder. Already imprisoned for killing an elderly woman, Eberling became a suspect in Marilyn Sheppard's murder when modern testing of DNA from the crime scene pointed to him.

In 1995, Sam brought a civil suit against the state to declare his father innocent, rather than merely not guilty, but in 2000, the jury found the elder Sheppard not innocent. To this day, the crime remains unsolved.

In 1963, a television series called The Fugitive featured a man on the run from the law after being wrongly convicted of his wife's murder. Though the creator insisted it wasn’t based on the Sheppard case, it’s been argued that the show helped turn public opinion in Sheppard’s favor during the second trial. In 1993, The Fugitive was made into a hit movie starring Harrison Ford and Tommy Lee Jones.