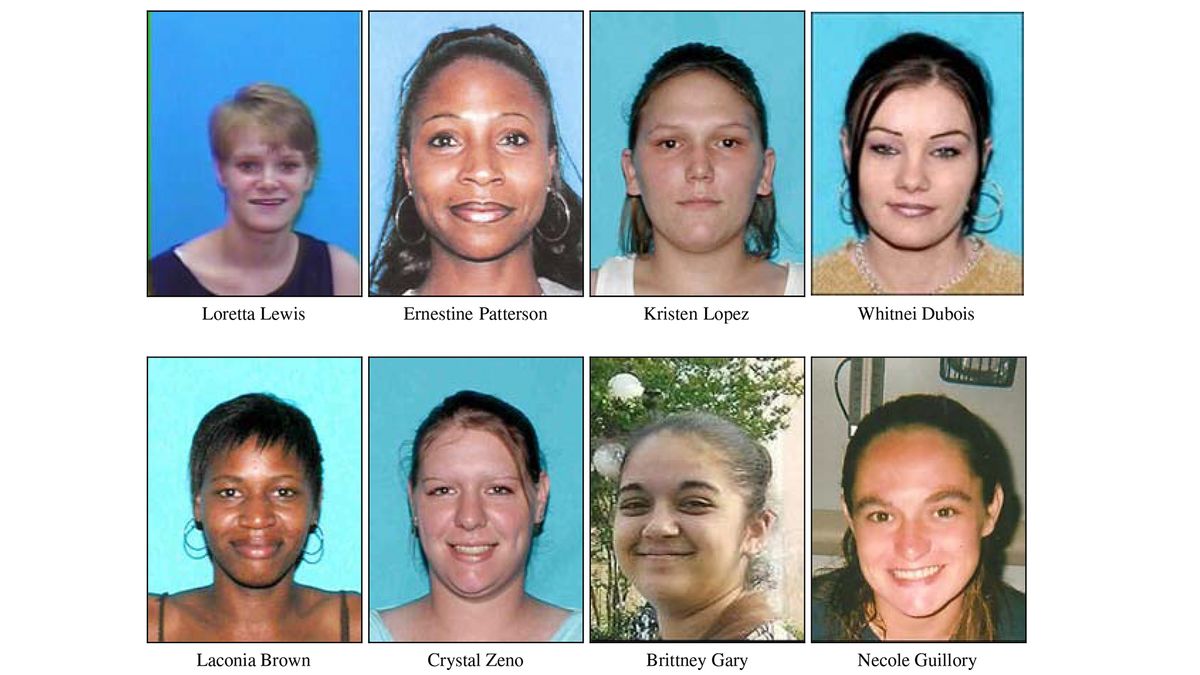 On May 20, 2005, the decomposed body of 28-year-old Loretta Lynn Chaisson Lewis was fished out of a canal on the outskirts of Jennings, in the Jefferson Davis Parish of southwest Louisiana. Known to turn tricks as she battled a crack addition, her death was seemingly the fallout of the drug trade that ran along the highway I-10 corridor and left areas like South Jennings desolate.

Chronicled in the book Murder in the Bayou: Who Killed the Women Known as the Jeff Davis 8?, less than a month later, on June 18, another prostitute, 30-year-old Ernestine Marie Daniels Patterson, was discovered in another canal off a highway south of Jennings. Two men were held for second-degree murder, though the charges were later dropped.

On March 18, 2007, a third victim with a similar profile to the others, 21-year-old Kristen Gary Lopez, was found in yet another canal. Again, two suspects were arrested – Jennings pimp Frankie Richard and his niece Hannah Conner – but were released due to lack of conclusive evidence.

Over the next year and a half, the bodies of four more prostitutes – 26-year-old Whitnei Dubois, 23-year-old Laconia "Muggy" Brown, 24-year-old Crystal Shay Benoit Zeno and 17-year-old Brittney Gary – were found in or near Jennings. Most were decomposed and displayed virtually no sign of trauma, their deaths believed to be the result of asphyxia.

In December 2008, Jefferson Davis Parish Sherriff Ricky Edwards announced the formation of a task force culled from local, state and federal law enforcement agencies to investigate the murders. While reassuring to some, the beefed-up scrutiny wasn't enough to prevent an eighth death – in August 2009, 26-year-old Necole Guillory was spotted off I-10 in nearby Acadia Parish – or provide any new answers.

That fall, Sheriff Edwards publicly acknowledged for the first time that the deaths were possibly the work of a "common offender," and the task force more than doubled the reward for information leading to the killer of what became known as the Jeff Davis 8. 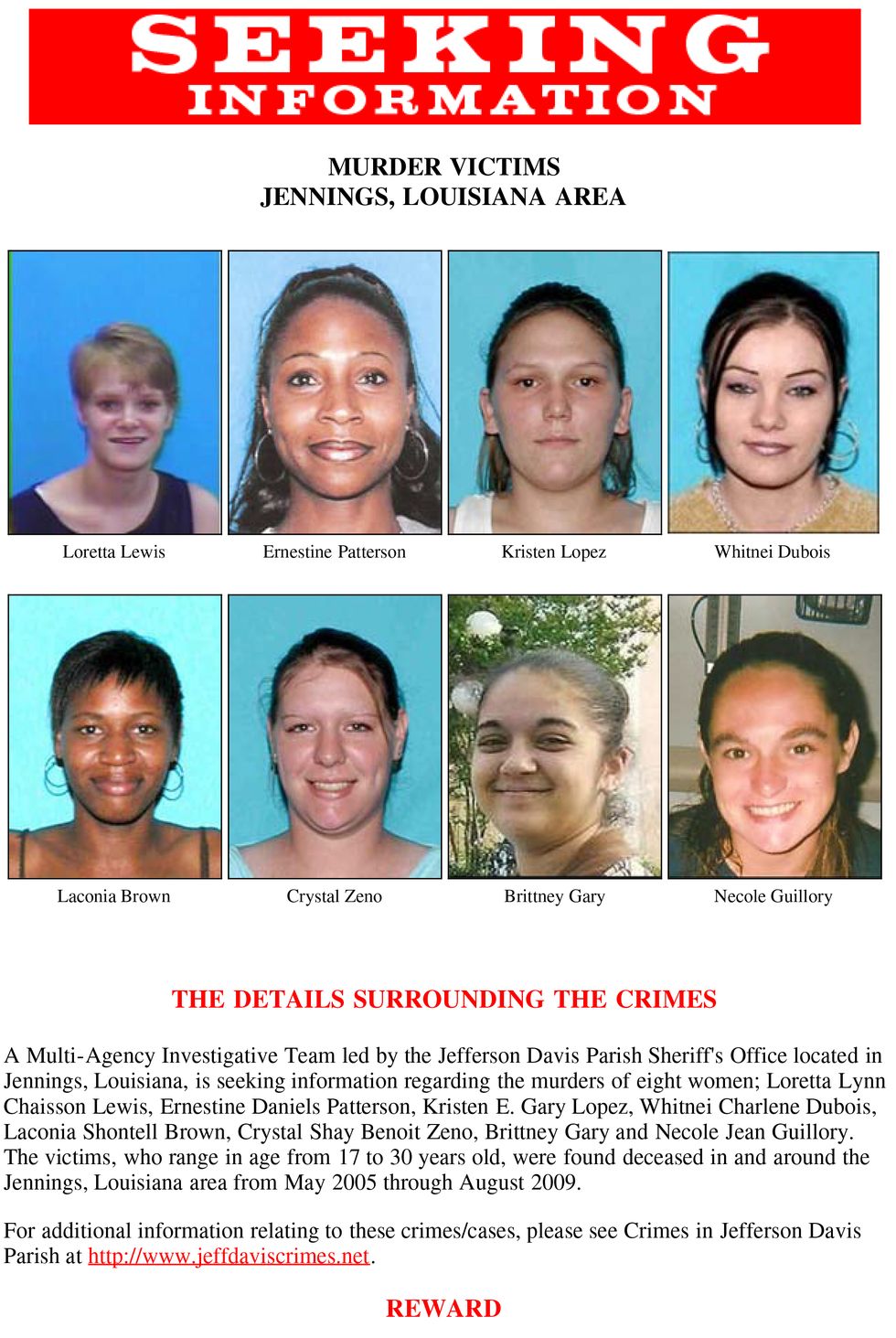 Meanwhile, the saga had expanded past the realm of local coverage and into the national media. A January 2010 New York Times article reported on the fear and frustration felt by family members of the slain women, as well as the missteps of local law enforcement in charge of solving the crimes.

In one instance, the Times noted, the chief investigator bought a pickup truck from an inmate known to be friends with one of the victims. A witness later said she saw Lopez, the third victim, in the truck on the day of her disappearance, but by then the vehicle had already been washed and resold.

The investigator was fined and removed from the case – and placed in charge of evidence at the Parish sherriff's office.

The article caught the attention of New Orleans-based writer Ethan Brown, who ventured to Jennings to conduct his own investigation beginning in mid-2011. Through extensive interviews with families, suspects and taskforce personnel, and careful examination of public records, Brown uncovered evidence that pointed him away from the serial killer theory and toward a more complex cover-up orchestrated by authorities.

The victims, he wrote on Medium, not only knew each other well and shared similar woes with their drug addictions and financial problems, they had all served as police informants. According to relatives, many seemed excessively anxious or frightened before they disappeared, with the article making it clear that they couldn't rely on protection from police.

In December 2007, two inmates told Jennings Sergeant Jesse Ewing on tape what they knew about the truck from the Lopez case being sold to the investigator and scrubbed clean of evidence. Suspicious of his colleagues, Ewing sent the tapes to a regional FBI office, only for them to be relayed to supervisors on the taskforce. Soon afterward, he was out of a job.

Even more alarming, one member of the sherriff's office, David Barry, was fingered as a murder suspect by multiple witnesses. One of them described how Barry would cruise the seedy south side for prostitutes with his wife, after which they would drug the pickup with a spiked drink and bring her home to their sex room. Despite the numerous allegations, Barry sat for only one interview with the task force before his death in 2010.

At the center of it all was Richard, the pimp and former strip-club proprietor who was also allegedly an informant and claimed to have been sexually involved with most of the women. Despite his lengthy rap sheet and allegations that placed him in connection to some of the murders, he was free to walk the streets and talk openly with Brown about his involvement with the victims.

Thanks in part to the near-simultaneous debut of True Detective, with its first-season storyline of murder investigations in backwater Louisiana, Brown generated enough buzz with his Medium article to land a book deal.

He also generated pushback from the Jefferson Davis Parish law enforcement, with new Sherriff Ivy Woods denigrating Brown as an "author of fiction stories." Worse, the malicious undercurrent that had killed the eight women and silenced the witnesses was threatening to come for him next. After one of his contacts told him that he'd "heard more than once that you'll never get that book out. You can take that however you want to," Brown was leery to return to Jennings to complete his interviews for months afterward.

Still, he managed to finish his work. The September 2016 release of Murder in the Bayou: Who Killed the Women Known as the Jeff Davis 8? fleshed out the reporting featured in his Medium article and delivered a new bombshell: A field representative for Louisiana Congressman Charles Boustany owned a notoriously seedy Jennings hotel where Boustany allegedly had sex with three of the victims.

Amid a tight battle for a Senate seat, Boustany filed a defamation lawsuit against Brown and his publisher. He dropped the lawsuit in December, after losing the race.

Beyond the backlash from those named in its pages, Murder in the Bayou drew a largely positive response en route to becoming a best-seller.

"To me ... justice is nobody having to live the way in which these women lived. That's a greater justice to me than just, OK, we're going to slap some handcuffs on people," Brown told The Advocate. "This is not to say that people didn't love them. … It's to say that the way in which they lived, this life so beyond hardscrabble — Where do I get a cheese sandwich today? Where do I rest my head today? — that nobody has to live that way again. That's, to me, the true justice."