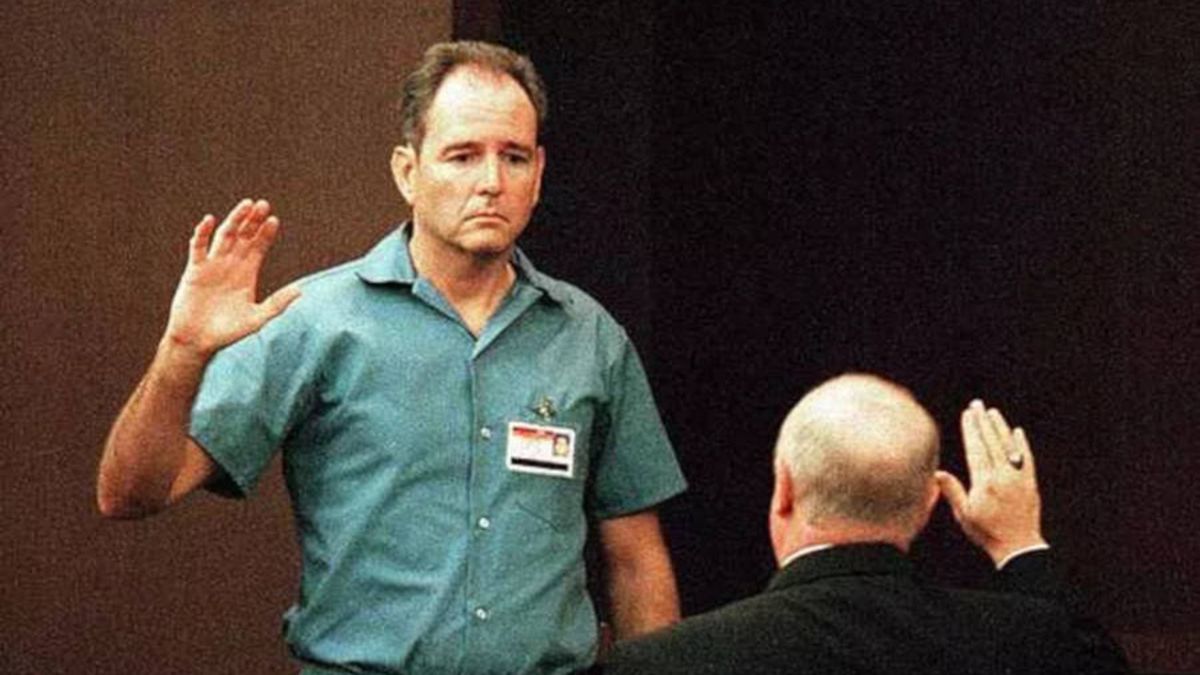 In March 1994, a struggling actor and screenwriter named Kevin Williamson became engrossed in a news program about a drifter who terrorized the town of Gainesville, Florida, with the murders of five college students over three days in August 1990.

Spooked, he hammered out the screenplay for what became Scream, the successful 1996 fright flick that was celebrated for its knowing winks at horror film tropes and breathing new life into the genre.

But while Scream provides plenty of slashing scares, in the end, its story of Sydney and the masked killer bears only a passing resemblance to that of Danny Rolling, the "Gainesville Ripper," whose life of violence and despair would present a difficult task for any screenwriter to depict.

READ MORE: Scream Cast: Where Are They Now?

Rolling suffered abuse at the hands of his father

As he later recalled in The Making of a Serial Killer: The Real Story of the Gainesville Murders, Rolling endured the sort of horrendous childhood that made him ripe to emerge as a menace to society.

He was born in 1954 in Shreveport, Louisiana, to a 19-year-old mother named Claudia and a police officer named James, a decorated Korean War veteran who may have suffered some combination of post-traumatic stress disorder and inherent mental illness.

Temperamental, controlling and violent, James fought with Claudia and heaped verbal abuse on Danny and his younger brother, Kevin, resorting to physical attacks on the boys as they got older.

Rolling turned to art and music for solace – his Christmas gift of a guitar at age 15 proved to be one of his happiest memories from adolescence. He also recalled these early years as a time when he developed multiple personalities as a "defense" from the nightmarish reality around him, with attempts at suicide failing to bring an escape.

He began a cycle of armed robberies and incarceration

Kicked out of the Air Force in 1972 after getting busted for drug possession, Rolling went to live with his grandfather and, for a time, found some stability through his church. He married a woman named O'Mather Halko, with whom he had a daughter, but eventually, he drove her away after exacting the same sort of abuse on her that had been prevalent in his own childhood home.

Already harboring a habit for voyeurism and plagued by disturbing visions, Rolling took a turn for the worse after the divorce. He raped a woman who resembled his ex-wife and embarked on several armed robberies through the South, leading to his incarceration in Jackson, Georgia, in 1979.

The 1980s brought more of the same for Rolling, who was in and out of jail in Alabama and Mississippi for armed robbery. His time in between stints in jail were spent traveling the country, stealing and occasionally forcing himself on women.

Back in Shreveport in November 1989, Rolling was fired from his job at a restaurant. That same night, he broke into a home to murder 24-year-old Julie Grissom, her eight-year-old nephew, Sean, and her 55-year-old father, Tom. Echoing his later killings, Julie was found with bite marks and her body arranged with her legs spread on the bed.

The following May, Rolling got into one final argument with his father. This time he pulled out a gun and shot James in the stomach and head. His father survived but lost the use of an eye and ear before fleeing to Kansas and Florida, eventually arriving in Gainesville.

In 1990, he set up a campsite in a wooded area behind the University of Florida, Rolling embarked on his murder spree as students began the fall semester.

On August 24, he slipped into the home of UF freshmen Christina Powell and Sonja Larson and brutally stabbed and raped both students. The following day, he made Santa Fe Community College student Christa Hoyt his next victim, leaving behind her severed head on a shelf to face her body propped up on the bed.

On August 27, the killer surfaced again at the home of two 23-year-old UF students, Manuel Toboada and Tracy Paules. A former high school football player, Toboada put up a fight before both were overwhelmed; neither body was mutilated this time.

As Rolling skipped town, a local task force was assembled to calm a frantic community and find answers. Authorities soon zeroed in on a prime suspect, a UF student who briefly lived in the same complex as two of the victims and exhibited erratic behavior, at one point getting arrested for hitting his grandmother. It was soon revealed that this student was battling acute manic depression, however, and with zero evidence connecting him to the murders, the task force was back to the drawing board.

Meanwhile, the killer they were looking for was already in jail. In September, Rolling had robbed a Winn-Dixie grocery at gunpoint in Ocala, Florida, and was nabbed after crashing the getaway car. It wasn't until early next year, when authorities used a tooth extracted from Rolling to link him to the DNA evidence at the Gainesville crime scenes, that he became a primary suspect.

Already facing multiple life sentences for his various armed robberies, Rolling was formally charged with the murders of the five Gainesville students in June 1992.

Around this time, Rolling began corresponding with journalist Sondra London, who would become his fiancée and help him put together The Making of a Serial Killer. And while he had pleaded not guilty, he used fellow inmate Bobby Lewis as his "mouthpiece" to confess to the murders.

In February 1994, just before the start of his trial, Rolling abruptly changed his plea to guilty. To determine the sentence, jurors listened to testimony from his mother, who recounted the abuse the defendant had received at the hands of his father, and from a psychiatrist, who described an alternate personality of Rolling's named "Gemini," who drove him to his sadistic acts.

Two other psychiatrists also testified that a severe personality disorder was in play, but stated their belief that Rolling understood the magnitude of his crimes. The jury unanimously found Rolling guilty of first-degree murder on all five counts in late March, and a month later he was sentenced to death.

His appeals exhausted, Rolling faced execution at Florida State Prison on October 25, 2006. In his final moments, he regaled the 47 people crammed into the witness room with one of his songs, a religious hymn with the refrain "none greater than thee, O Lord, none greater than thee." His microphone was then cut off, ending a life story as twisted as any that could appear on the big screen.