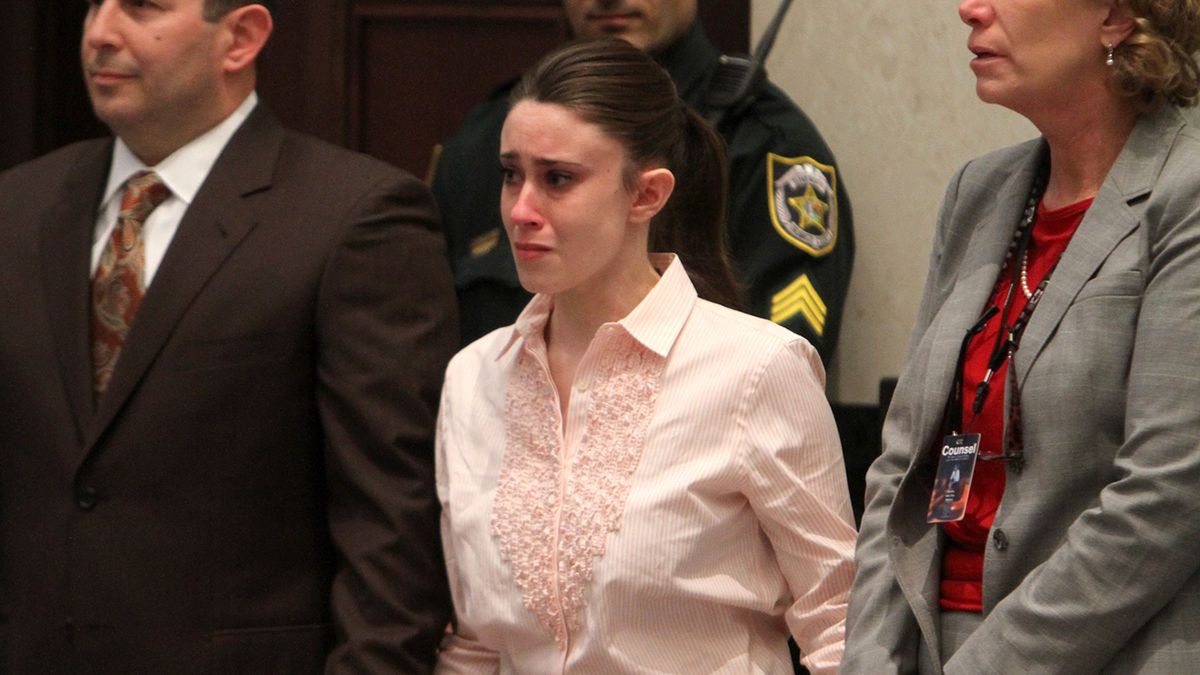 In 2008, the world was captivated by the bizarre behavior displayed by Casey Anthony. The then-22-year-old single mother from Orlando, Florida, was revealed to have spun a web of lies to cover up for the disappearance of her 2-year-old daughter, Caylee, that summer; the Facebook photos of her partying around town and a dearth of emotion in interviews fueling the charges of first-degree murder before Caylee's body was discovered later that year.

However, there would be no closure for those outraged by a mother's neglect of her child, as Casey escaped conviction in 2011, while the questions of who killed her young daughter and why were never resolved.

Caylee arrives after Casey's repeated denials to other family members about her pregnancy. Although she suggests possible partners, including then-fiancé, Jesse Grund, and another young man who supposedly died in a car accident, the identity of Caylee's father is never publicly revealed.

Caylee was raised in the Orlando home of her grandparents, Cindy and George Anthony, but the day after an alleged family argument on Father's Day, June 15, Casey leaves with her young daughter and rebuffs efforts to reconcile in person.

[Watch Casey Anthony: How Did We Get Here? On A&E Crime Central.]

After learning that a family car used by Casey had been impounded, George retrieves the car and is overwhelmed by the smell that remains even after a bag of trash is removed from the trunk. Cindy tracks down her daughter later that day and, over a string of 911 calls, reports that Caylee has been missing for a month, demands Casey's arrest and notes the vehicle's odor, saying, "It smells like there's been a dead body in the damn car."

Casey leads investigators on a pair of wild goose chases, first to the uninhabited apartment of a nanny named Zenaida Fernandez-Gonzalez, who allegedly ran off with Caylee on June 9, and then to Universal Studios, where Casey pretended to have a job. She is arrested and charged with child neglect, lying to investigators and interfering with a criminal investigation. 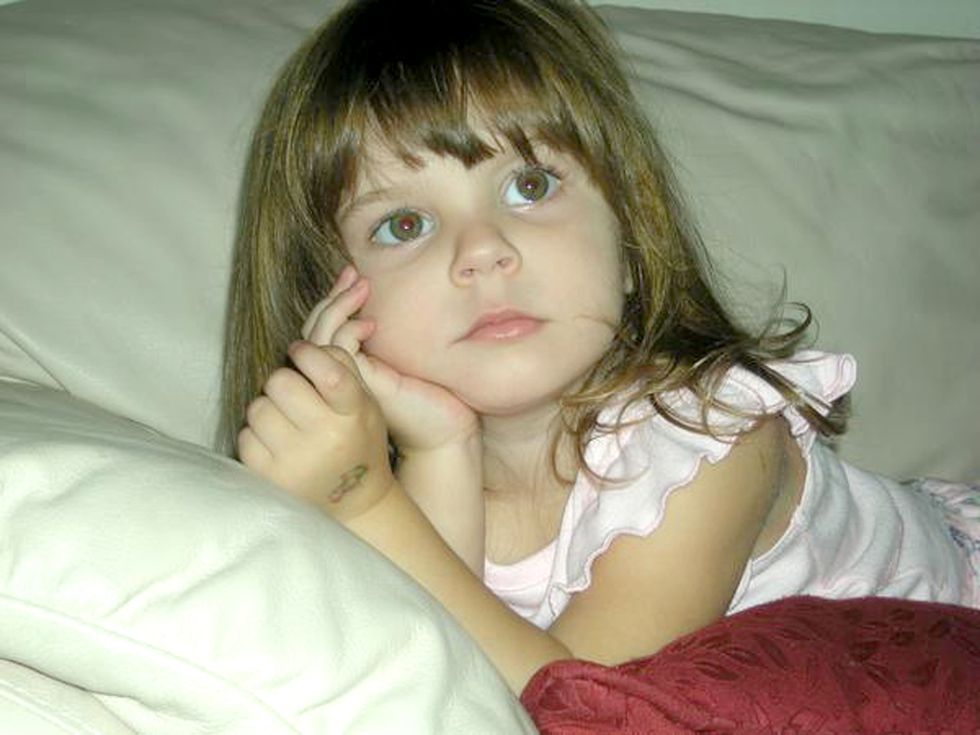 The hearing introduces evidence that a cadaver dog had zeroed in on the odor of human decomposition in the car trunk and the Anthonys' backyard, as well as Cindy's admission that they had all seen Caylee after June 9. Although Casey is being held on relatively minor charges, the judge is disturbed enough by the evidence and the young mother's seemingly indifferent behavior to set bail at $500,000.

California bounty hunter Leonard Padilla announces that he has paid the $500,000 with the hope that Casey will lead them to Caylee.

The reversal comes a day after Casey's arrest for allegedly stealing and cashing checks from a friend, with the angry crowds demonstrating outside the Anthonys' home contributing to the decision. "I came, I gave it my best shot, she didn't want to talk to me. What can I say?" Padilla says. Anthony will again be released after other parties combine to post the bond on September 5, although she will return to jail by the end of the month.

The unsealed indictment also charges her with aggravated child abuse, aggravated manslaughter and four counts of providing false information to law enforcement. In response, Casey's lawyer, Jose Baez, says his client's actions will become clearer at trial: "I sincerely believe when we have finally spoken, everyone, and I mean everyone, will sit back and say, now I understand, that explains it."

October 24, 2008: Forensic reports from an examination of Casey's car are released

The reports note that a hair strand discovered in the trunk is "microscopically similar" to those found on Caylee's brush and showed "characteristics of apparent decomposition." Additionally, an air sample from the trunk is found to contain chemical compounds consistent with human decomposition.

December 11, 2008: The skeletal remains of a young girl are discovered

The bones are found in a bag in a wooded area less than a half-mile from the Anthonys' home by utility worker Ray Kronk. It is later revealed that Kronk had sought to convince police to search the area back in the summer.

December 20, 2008: The remains are confirmed to be those of Caylee

The Orange County chief medical examiner reports that the bones showed no evidence of trauma and that Caylee's death is being ruled a "homicide of undetermined means." Although the skull is found with duct tape around the nose, mouth and jaw, the advanced state of decomposition ultimately prevents investigators from pinpointing an exact cause and date of death.

January 23, 2009: George is taken into custody after a suicide attempt

George is reported to be "despondent and possibly under the influence of medication and alcohol" when he is located at a hotel in Daytona Beach, Florida, along with a five-page suicide note. 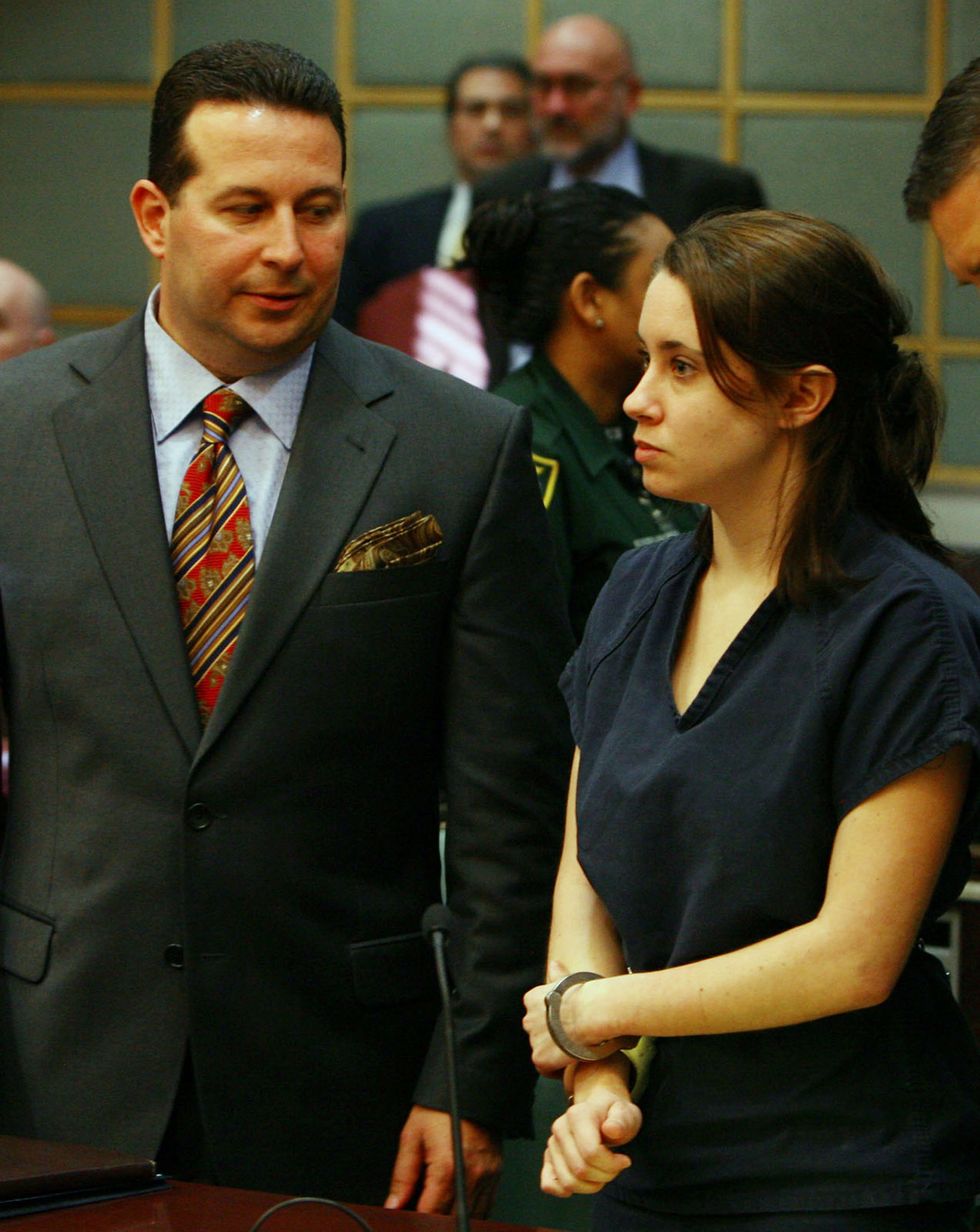 April 13, 2009: Prosecutors announce their intention to pursue the death penalty

Although earlier court papers indicated that the death penalty would not be in play, the new notice of intent cites "sufficient aggravating circumstances" to justify its imposition.

May 24, 2011: The trial commences with the defense's bombshell claims

The trial begins with the prosecution's opening salvo of Casey being a party girl with no use for a young daughter, as evidenced by the month spent shopping and drinking during Caylee's absence.

Those remarks are soon eclipsed by Baez's stunning opening statement which asserts that Caylee drowned in the family swimming pool and that George sought to cover up the accidental death. The lead defense lawyer also alleges that George had molested Casey, thereby igniting her habit of lying to cover up the pain and that Kronk, the utility worker, had found Caylee's body and planted it in the woods.

Taking the stand as the first witness, George denies that he ever molested his daughter or knew anything about Caylee's drowning.

Simon Birch, the manager of the towing company that impounded Casey's car in June 2008, testifies that he had encountered multiple vehicles with dead bodies during his three decades in the business and that the smell from Casey's car was consistent with those past experiences.

That same day, the fiancée of Casey's brother also takes the stand and describes the "very special bond" she observed between Caylee and her mother.

Arpad Vass of the Oak Ridge National Laboratory explains how the "shockingly high" amount of chloroform – a chemical released by decomposition, as well as one that can be used to knock someone unconscious – detected in the car trunk led to his conclusion that a dead body was indeed present. However, his testimony is contradicted the following day by an FBI scientist, who compares the chloroform level in the trunk to the amount found in household cleaners.

June 8, 2011: The jury ponders the relevance of search engines

A software designer testifies that someone had searched for "chloroform" a whopping 84 times and also looked up such terms as "head injuries," "ruptured spleen," "chest trauma" and "internal bleeding" on the Anthonys' home computer in March 2008, during the regular work hours of George and Cindy. The designer later reports an error in his detecting software and determines that the user visited a site related to chloroform only once. 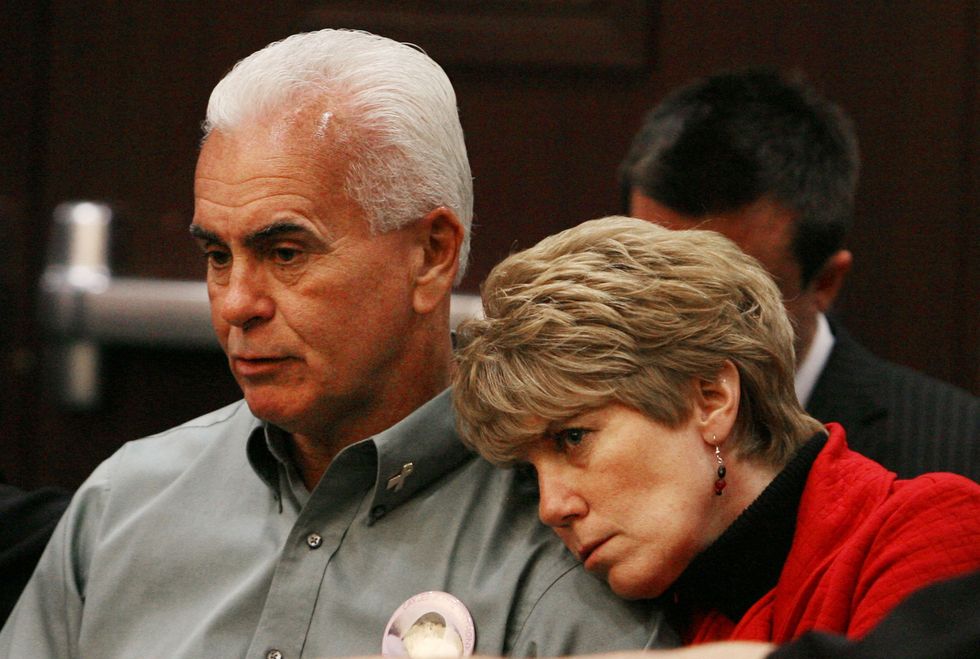 George (L) and Cindy Anthony during a hearing for their daughter, Casey Anthony, at the Orange County Courthouse in Orlando, Florida on March 2, 2009; Photo: Red Huber/Orlando Sentinel/Tribune News Service via Getty Images

In a crucial day for the defense, Cindy claims that she was the one who researched chloroform on her computer. She also testifies that a stain found in the trunk, allegedly caused by Caylee's decomposing body, was there when the family purchased the car eight years earlier.

Continuing with the narrative that Casey was overly burdened by Caylee, lead prosecutor Jeff Ashton emphasizes to the jury how the young mother was motivated enough to go to extremes to achieve her freedom. "Something needed to be sacrificed, that something was either the life she wanted or the life thrust upon her," he says. "She chose to sacrifice her child."

While forbidden from revisiting the unsupported molestation claims, Baez nevertheless delivers an effective closing argument by pointing out the lack of evidence that could definitively place Caylee's body in the car trunk or tie Casey to her daughter's death. 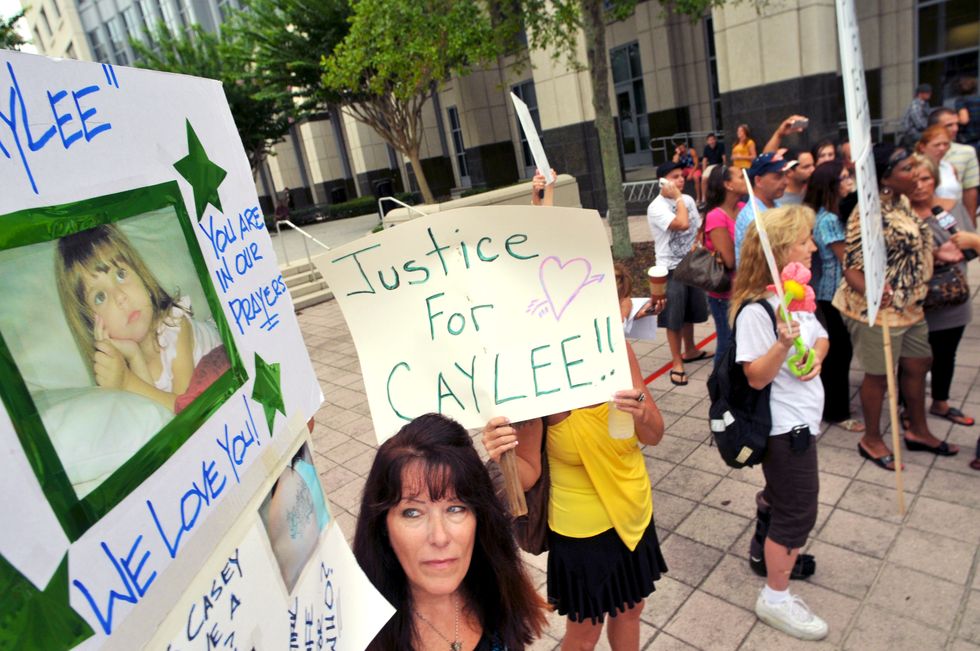 After almost six weeks of testimony and 400 pieces of evidence presented in court, the jury of seven women and five men takes less than 11 hours to reach a verdict of not guilty.

Casey receives a four-year sentence and a $4,000 fine for the four counts of lying to police, but the prison time is canceled out by the near three years already spent behind bars and credit for good behavior.

Casey exits the Orange County Jail shortly after midnight, passing the approximately 100 protesters who showed up to demand justice for Caylee. "It is my hope that Casey Anthony can receive the counseling and treatment she needs to move forward with the rest of her life," her lawyer says in a statement.