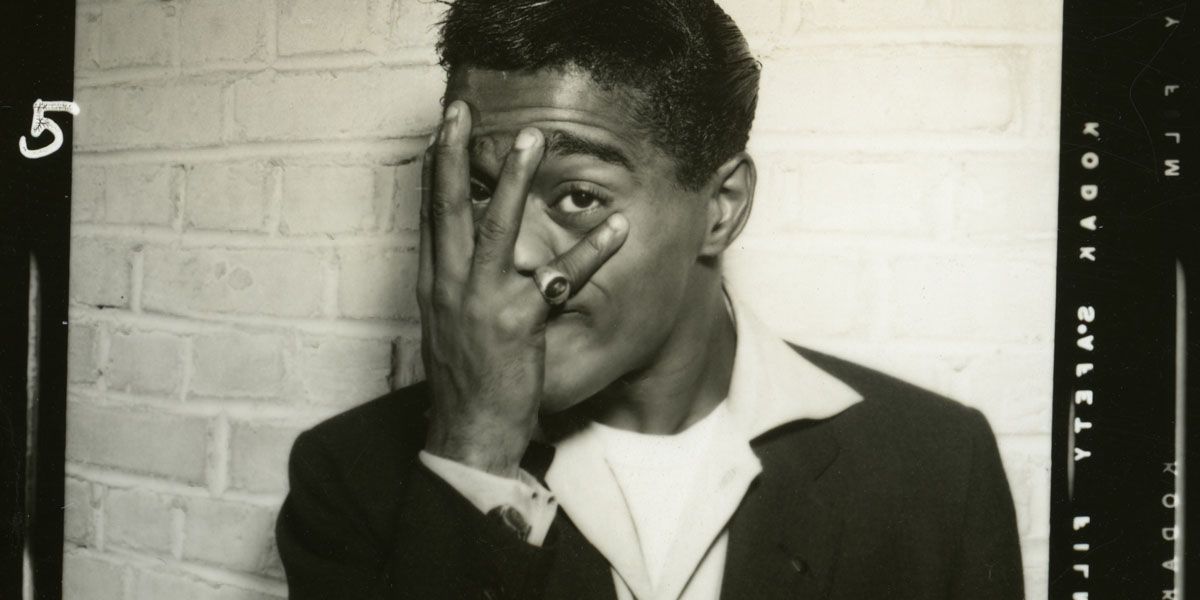 Photo: The Estate of Altovise Davis

His nickname was "Mr. Show Business," but Sammy Davis Jr. fondly called himself "the only Black, Puerto Rican, one-eyed, Jewish entertainer in the world." Although he stood at a mere 5’6” and weighed only 120 pounds, Davis’ 60-year-long-career left a massive impression on the entertainment world. He starred in seven Broadway shows, appeared in 23 films including Ocean’s Eleven, regularly landed television roles and recorded dozens of albums. Although he died of throat cancer at the age of 64, his memory lives on as one of the greatest pop-culture icons of the 20th century.

Here are seven interesting facts about Mr. Bojangles himself:

He lost an eye in a car accident

On November 19, 1954, Davis was driving from Las Vegas to Los Angeles to record a soundtrack for the film Six Bridges to Cross. He never made it to the studio. Early that morning, his Cadillac collided with an automobile that backed out in front of him. He sustained massive injuries to his face, including a broken nose and damage to his left eye so severe that it had to be replaced with a plastic one. A consummate professional, he was back on stage only two months later.

He converted to Judaism

Life was different after Davis' car accident. He believed that surviving the crash was a miracle and spent much of his recovery reflecting on his existence. While at San Bernardino hospital, he met a Jewish Chaplain and asked “a million questions about the miracle” of coming out of the accident alive. Although his parents were Christians, Davis was not deeply religious. But after learning about Judaism, he felt Jews and Black people shared a similar history of oppression. Over the years, he studied more about the religion and eventually converted.

He held a grudge against JFK

According to Davis’ 1989 biography, John F. Kennedy asked the entertainer not to participate in the 1961 Presidential inauguration, because the sight of the Black entertainer alongside his wife, May Britt (who was white), would potentially anger Southerners. Being shunned by the president was a sore spot for Davis, but those feelings were smoothed somewhat in 1987 when he was honored by the Kennedy Center.

He had a close bond with fellow Rat Packer Frank Sinatra

During his teens, Davis Jr. first met Frank Sinatra when he helped open for the Tommy Dorsey Orchestra and Sinatra. The two became lifelong friends, enjoying palpable chemistry both on and off stage. In fact, Sinatra was like a big brother to Sammy. In one instance, Sinatra tore up his contract when a theater barred Davis because of his race. After SDJ had his car accident, Sinatra paid the medical bills. For Sammy, the admiration was mutual: “I wanted to be like him, I wanted to dress like him, I wanted to look like him, I took my hair and had it all done up, Sinatra style, with the little curl here and all.”

READ MORE: How the Rat Pack Transformed Las Vegas into an Entertainment Destination

He had a difficult relationship with his daughter

It’s no surprise that the world’s greatest entertainer had a passion for his work, but that passion often strained his relationship with his family. In a memoir about her father, his daughter, Tracy Davis, said her famous dad missed her fifth birthday party, then tried to make it up to her by handing over a $100 bill. She also revealed that he skipped her college graduation and routinely lost track of her phone number. Although the two grew closer together later in life, for Tracy, the scars remained: “I am not saying that he didn't love us, but work was his driving force.”

He performed one of the most famous kisses on television

In 1972, the Rat Packer helped create one of TV’s most legendary moments — an on-screen kiss that appeared on the highly popular show All in the Family. The episode featured Davis (as himself) visiting the Bunker household in order to retrieve a briefcase he left in Archie’s taxi. Although Archie makes several racist remarks throughout the show, Davis keeps his cool and famously plants a smooch on Archie’s cheek before heading for the door. It was one of the show’s most famous episodes and went on to be nominated for two Emmys.

The paternity of one of his sons was in question

Reports surfaced that one of Davis' adopted sons was actually his biological son. Fifty-five-year-old Mark Davis said he first learned he was adopted after reading a Life magazine article in the 1960s that said the entertainer had adopted Mark around the age of two. But in 2013, Mark found his original birth certificate which listed Davis as his biological father. Much to his disappointment, however, a DNA test showed that Davis wasn’t his biological father. Maybe the distinction didn’t matter to Davis. According to Mark, his father’s last words to him from his deathbed were: “You are my son.”