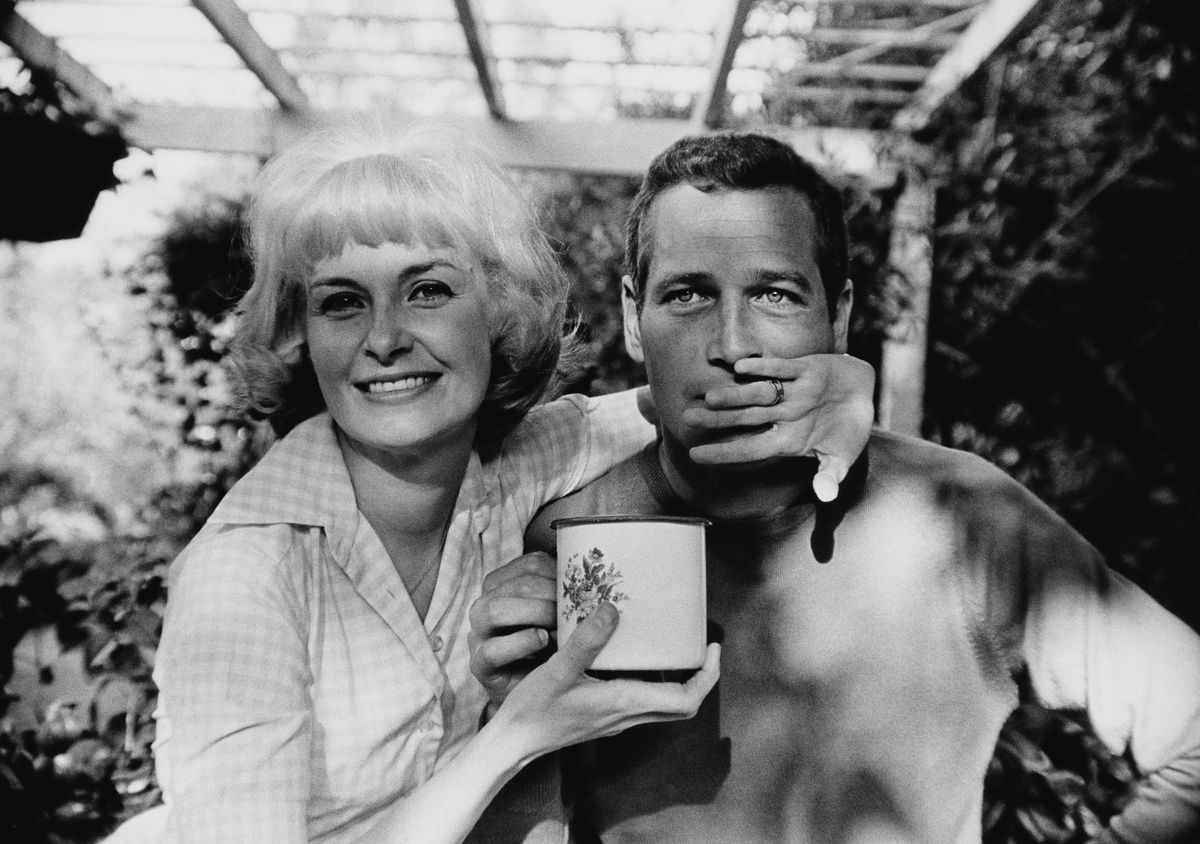 Inside, she encountered an equally unknown 27-year-old Paul Newman, dressed impeccably in his seersucker suit, with a full head of curly hair and those striking blue eyes that would soon become famous the world over.

He "looked like an ad for an ice cream soda," Woodward recalled to Today, 50 years later, adding, "and I thought, 'Ugh, that's disgusting.'"

Newman was far more dazzled at first sight and, luckily, earned an opportunity to make a better impression when they both joined the production of a new stage show, "Picnic," later that year.

"She was modern and independent," he remembered in Shawn Levy's Paul Newman: A Life. "I was shy, a bit conservative. It took me a long time to persuade her that I wasn't as dull as I looked."

Indeed, any suspicion over Newman's picture-perfect looks and alleged dullness soon gave way to a mutual appreciation and affection, paving the way for a union that would serve as the gold standard for all couples who weather life's unpredictable twists and bumps together. 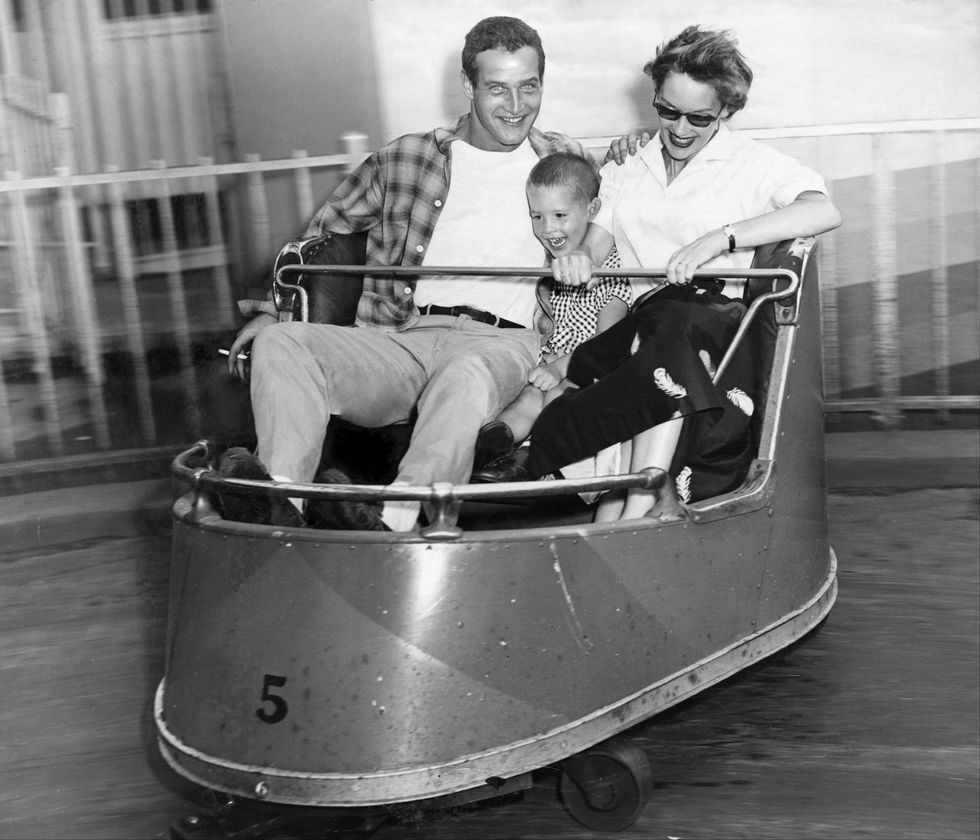 Newman, already married, was unable to suppress his feelings for his co-star

At the time, there was one major obstacle to the two acting on their shared attraction: Newman was already married and had a young son. He fathered a daughter shortly after "Picnic" opened on Broadway in February 1953, and another girl arrived the following year.

Newman and Woodward tried to keep their relationship professional. He even set her up with a friend, playwright James Costigan, describing her as "a wonderful girl." Yet the young, attractive thespians couldn't keep apart for long, particularly as their burgeoning careers kept them in the same social and professional orbit.

Fresh off the success of his first hit film Somebody Up There Likes Me (1956), Newman revealed to his wife, Jackie, that he was in love with Woodward. He soon moved out of their Long Island home, though she refused to end the marriage.

By the time Newman and Woodward were tapped to co-star in The Long, Hot Summer (1958), they no longer bothered concealing their romance from the cast, crew or any other casual observer. Jackie finally agreed to a divorce, clearing the path for the co-stars to tie the knot in Las Vegas in January 1958. 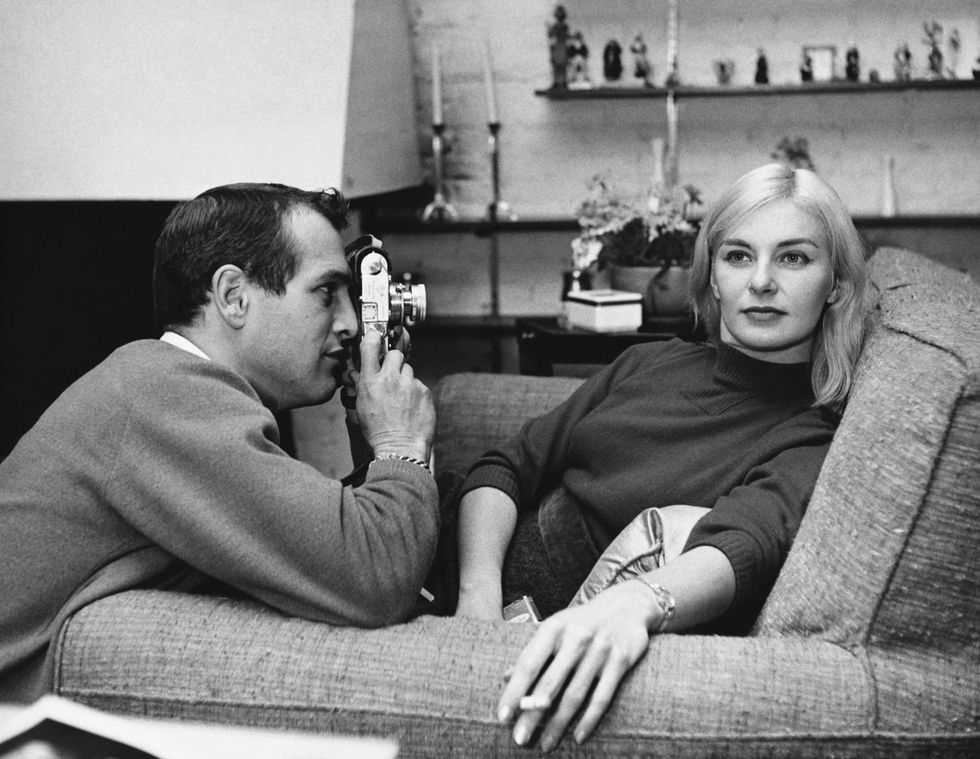 While Newman felt guilty about the divorce, he and Woodward could finally cast aside the burden of carrying on an illicit relationship. They soon settled into the next phase of their life as Hollywood's golden couple. 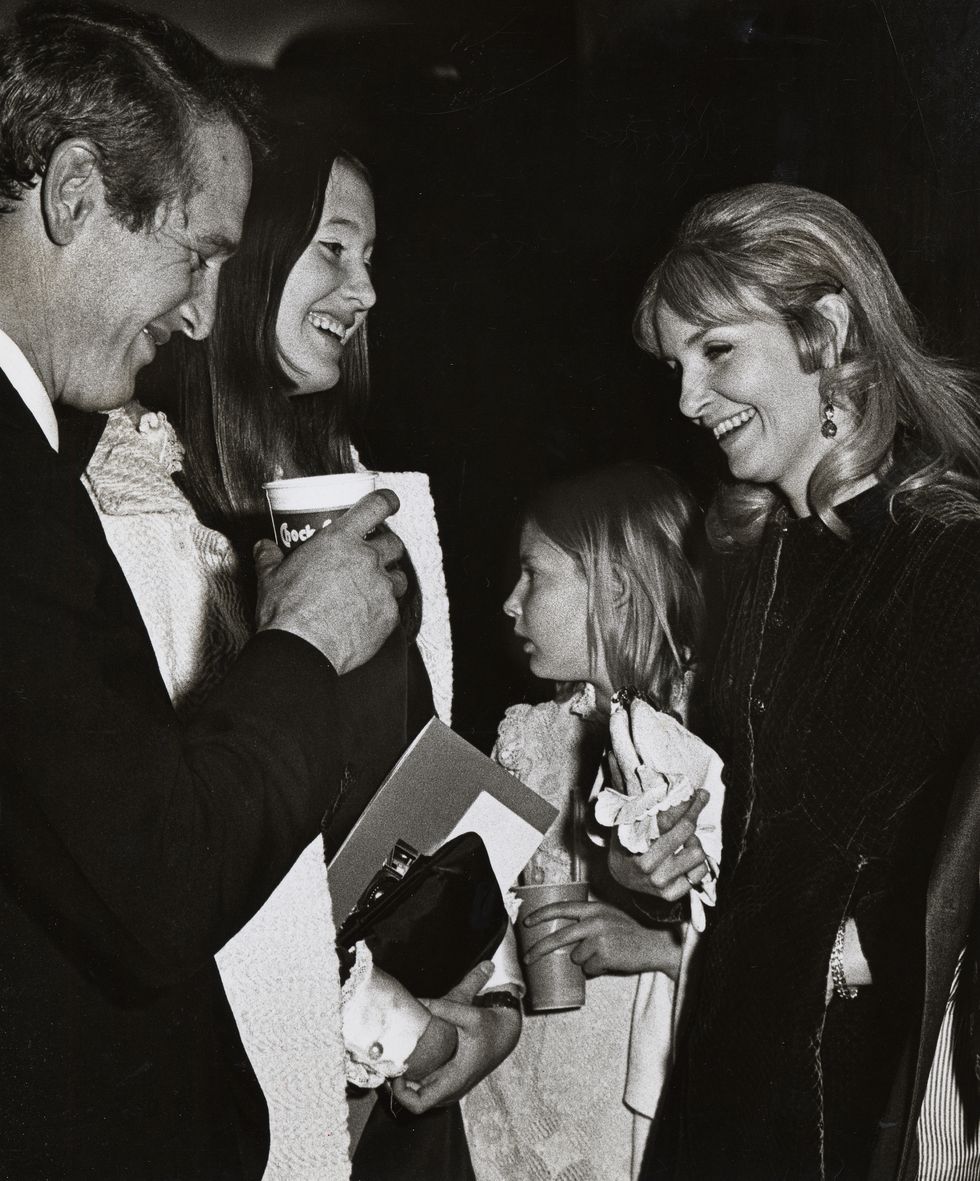 <em>Woodward and Newman with their daughters during the </em>2001: A Space Odysseyundefined<em>screening in New York City on April 3, 1968.</em>; Getty Images / Ron Galella / Contributor

During this time, Newman made the leap from heartthrob actor to big-time movie star with films including The Hustler (1961) and Hud (1963). Woodward, meanwhile, appeared content to slow her career and raise their growing family; Just one year after winning an Academy Award for her performance in The Three Faces of Eve (1957), she gave birth to the first of their three daughters.

But the transition from Oscar recipient to motherhood wasn't easy for Woodward, who later admitted she was never particularly comfortable with children. She still harbored ambitions to make her mark on stage and screen; Levy writes in A Life that she once dug into her husband for being "selfish" after he declined to co-star in one of her preferred projects, both knowing that his involvement would guarantee the film being made.

Newman eventually reversed course and joined her for what became A New Kind of Love (1963). Five years later, he made her the focus of his big screen directing debut, Rachel, Rachel. Woodward showed she could still pack a wallop as a dramatic actress even as she aged out of the lead romantic roles. 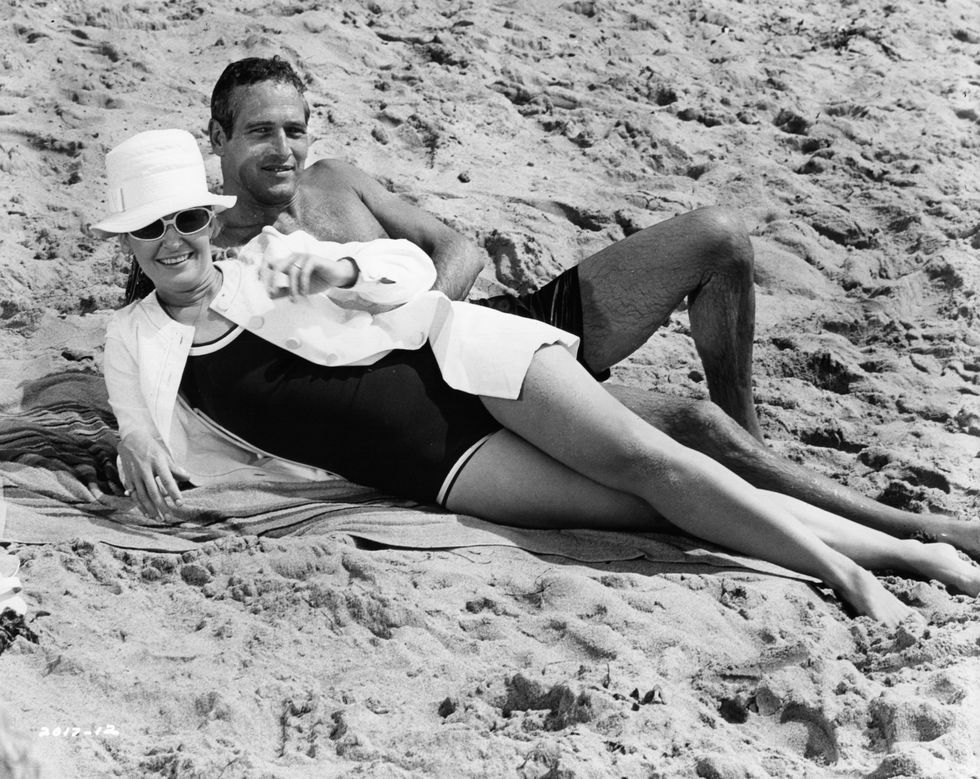 Joanne Woodward and Paul Newman relax on the beach between races in a scene from the film Winning, 1969.; Getty Images / Michael Ochs Archives / Stringer

Newman and Woodward enjoyed working together while prizing separate interests

With Hollywood's double standard for age and beauty, Newman remained one of the most famous movie stars in the world as he breezed through his 40s while Woodward's trajectory stalled. The seeming mismatch of the still-virile leading man and his critically respected but lesser-known wife sparked inevitable rumors of a marriage on the rocks, prompting the couple to take out a full-page ad in the Los Angeles Times in 1969 to assert their commitment to one another.

A Life indicates that Newman was having an affair with journalist Nancy Bacon around this time. The couple managed to get through what could have been an irreparable rupture to their union by flying off to England—the site of their honeymoon—for some much-needed one-on-one time. 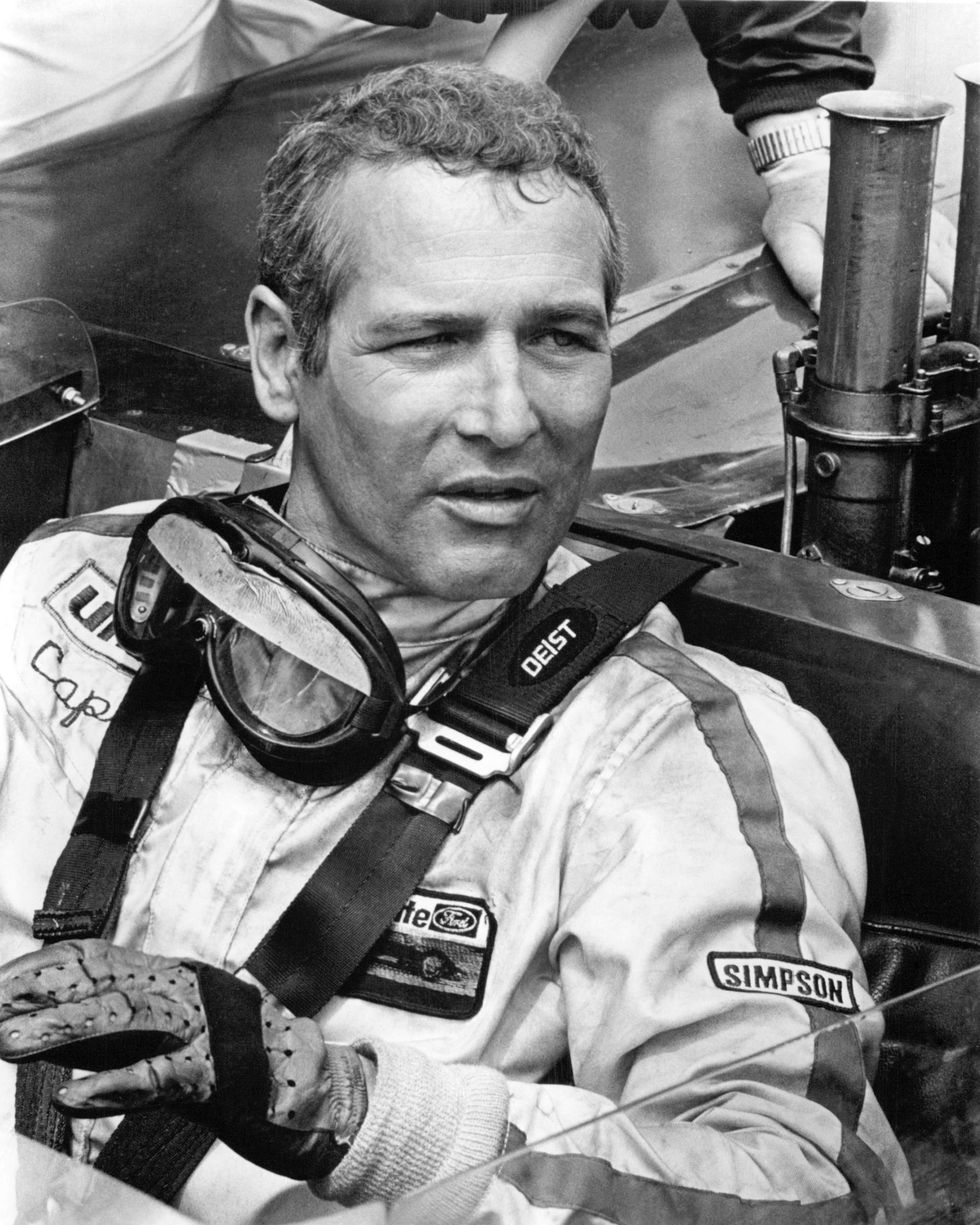 Their relationship survived, in part, because each discovered an outside interest that, if not fully understood by the other, at least received spousal endorsement. For Newman, it was a curiosity for auto racing that developed into a full-throttle passion following his turn as a driver in 1969's Winning. For Woodward, it was an appreciation for ballet, both as a means of exercise and a form of artistic expression, that prompted her to become a patron of several troupes.

Together, they campaigned for political candidates and remained devoted to their primary jobs, with Newman again stepping behind the camera to direct his wife in The Effect of Gamma Rays on Man-in-the-Moon Marigolds (1972). And when it came time to put aside work for the day, the couple retreated to their beloved estate in a wooded section of Westport, Connecticut, which included a treehouse specifically earmarked for their privacy when guests were in town.

Aging brought maturity, but not the dimming of mutual affection

Tragedy struck in 1978 when Newman's son from his first marriage, Scott, died from an accidental drug overdose.

The news rocked all members of the extended family and seemingly sparked a shift in the couple's priorities. Together they raised funds for the Scott Newman Foundation, focused on substance abuse education, and Newman built on an impressive philanthropic record by launching his Hole in the Wall Gang Camps for children stricken with debilitating illnesses.

The shift also was reflected in their screen roles. Newman was now moving into the "elder statesman" phase of his career, finally nabbing an Oscar for The Color of Money (1986), while Woodward picked up an Emmy for playing an Alzheimer's patient in the TV film Do You Remember Love? (1985). They also resumed their longtime collaboration with the Newman-directed, Woodward-headlined The Glass Menagerie (1987) and went on to co-star in Mr. and Mrs. Bridge (1990).

Despite the serious nature of their performances, the two maintained a playful appreciation of one another in public. Newman, who once famously declared his monogamy by telling Playboy, "I have steak at home; why go out for hamburger?," again risked his wife's wrath by comparing her to a bottle of fine wine in a New York Times interview. Later, when Woodward visited him on the set of the 1998 film Twilight, a mischievous Newman pulled a young Liev Schreiber aside to comment on her sexiness.

Sound bites aside, there were times when Newman simply needed to be in his life companion's presence. While filming Blaze (1989) in Louisiana, he abruptly called Woodward and asked her to join him. Although she was in the midst of the spring semester at New York's Sarah Lawrence College, with the hope of completing a long-delayed degree, she dropped everything to head south. "There's no academic degree in the world that can compare in importance to the fact that the person you’ve loved for 31 years is missing you," she noted, per A Life. 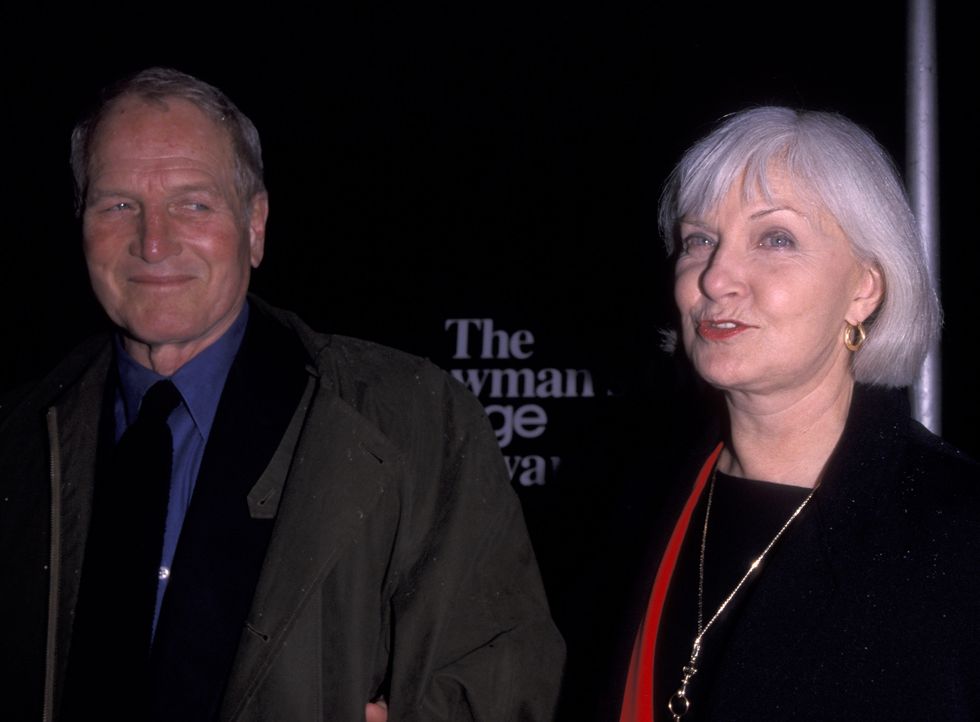 The couple continued making joint projects into their golden years

During a 2002 Today interview, Woodward mentioned that someone once asked her what their relationship was based on.

"And I said he's very good looking and very sexy and all of those things," she recalled, "and what finally is left is if you can make somebody laugh."

"And I keep her laughing," Newman interjected.

They also kept the flame alive through their joint passion for the craft that first brought them together. Prominently involved with the local Westport Country Playhouse, they revived a production of Our Town that leveraged its sold-out showings to a run on Broadway during the winter of 2002-03. They later joined up on the Playhouse stage to read love poems for a 2007 Valentine's Day performance.

The following January, three days after Newman marked his 83rd birthday, the husband and wife celebrated their golden anniversary. It was a quiet affair for the aging couple, with Newman battling lung cancer and Woodward adjusting to the real-life onset of Alzheimer's, but a memorable one all the same. "I feel privileged to love that woman,” he told a small gathering of their children and friends. "That I am married to her is the joy of my life."

Newman finally exited, stage left, nine months later, unable to help his wife to the finish line of her own health battles. While not quite the happy ending they–and fans–hoped for, they nevertheless left behind the story of a marriage, with all its glories and imperfections, that was every bit as monumental as their respective careers.