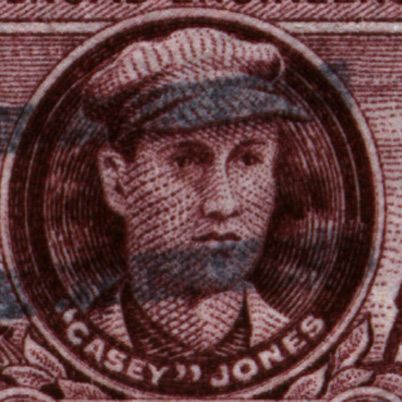 Born John Luther Jones on March 14, 1864, in Missouri, Casey Jones is an American folk hero who was an engineer during the heyday of the American railroad. He is best known for his courage, sacrificing his life by keeping one hand on the brake to slow the train and one hand on the whistle to warn others who might be near the train, as well as for his tenacity in keeping trains on schedule and his famous "whippoorwill whistle." He died in 1900 in Vaughan, Mississippi, when he collided with another train. A ballad written by Wallace Saunders entitled "The Ballad of Casey Jones" made Jones a permanent figure in American folklore.

Famed American folk hero Casey Jones was born John Luther Jones on March 14, 1864, in a rural part of southeastern Missouri. When Jones was a young boy, his father, Frank Jones, a school teacher, and his mother, Ann Nolan Jones, determined that the backwoods of Missouri offered little opportunity for their family, and, subsequently, the Jones family moved to Cacey, Kentucky—a town that was the source of Jones's nickname: "Casey."

While growing up in Cacey, Jones became extremely interested in the railroad and aspired to become an engineer. The American railroad passenger system was a relatively new and exciting mode of transportation, as people were able to travel great distances at high speeds.

At the age of 15, Casey Jones moved to Columbus, Kentucky, and began working as a telegrapher for the Mobile and Ohio railroad. In 1884, he moved to Jackson, Tennessee, where he was promoted at M&O to the position of flagman. While living in a boarding house in Jackson, Jones met and fell in love with Joanne "Janie" Brady, the daughter of a proprietor. The couple wed on November 26, 1886, and moved into a place of their own in Jackson. They would have two sons and a daughter together.

Jones was successful at M&O, quickly moving up the ranks. In 1891, he was offered a job at Illinois Central Railroad as an engineer. Jones earned a reputation as an engineer who would always stay on schedule, even if it meant pushing the train to great and sometimes dangerous speeds—a trait that made him a popular employee. The public began to recognize Jones for the "whippoorwill call" he would make on the engine's whistle while driving through towns.

On April 30, 1900, Jones volunteered to work a double shift to cover for a fellow engineer who was ill. He had just completed a run from Canton, Mississippi, to Memphis, Tennessee, and was now faced with the task of returning on board Engine No. 1 headed southbound. Sam Webb, a fireman for Illinois Central, accompanied Jones on the journey. The train was originally running more than an hour and a half behind, and Jones, determined to arrive as scheduled, ran the steam locomotive at speeds nearing 100 miles per hour in an effort to make up the time.

As Jones took a turn into Vaughan, Mississippi, Webb warned him that there was another train parked on the tracks ahead of them. As quickly as he could, Jones grabbed the brake with one hand and pulled the whistle with the other in an attempt to warn those around the train. Jones then turned to Webb and told him to jump to safety, all the while still trying to slow the train. The collision was brutal. All passengers on the train survived, with the exception of Casey Jones, who was struck in the throat while still holding one hand on the break and one hand on the whistle.

Shortly after Casey Jones's death, Wallace Saunders, an engine wiper who worked for I.E., wrote "The Ballad of Casey Jones," a tribute to Jones, who Saunders greatly admired. The song was later adapted by William Leighton and sold to vaudeville artists. The ballad became extremely popular and made Casey Jones an American legend. To this day, Jones's name is synonymous with the America's great steam era.