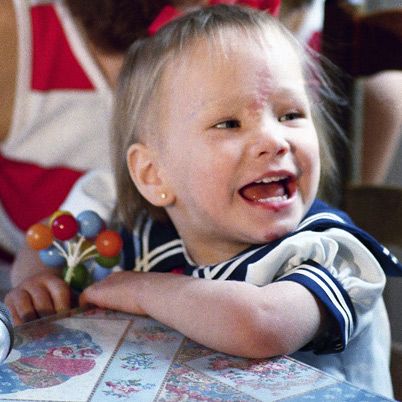 Who Is Baby Jessica?

Jessica McClure Morales, also known as "Baby Jessica," became famous in 1987, when, at 18 months old, she fell down a 22-foot well in her aunt's backyard. She remained trapped in the well for 58 hours, while America watched on CNN, before being rescued.

Falling Down the Well at 18 Months Old

Remembered worldwide as "Baby Jessica," Jessica McClure Morales was born March 26, 1986, in the oil city of Midland, Texas. She was born to teenage parents, Reba "Cissy" McClure and Lewis "Chip" McClure, who had fallen on hard times in the depths of the Texas oil bust of the mid-1980s.

The first 18 months of Baby Jessica's life passed without the world at large taking much notice. Then, on the morning of Wednesday, October 14, 1987, she suddenly became the most famous child in the country. Jessica's aunt Jamie Moore ran a daycare center out of her home, where that morning Jessica was playing with four other children in the backyard under the supervision of her mother, Cissy, who briefly went inside to answer a phone call, leaving the children momentarily unattended. Minutes later, she heard the kids screaming and rushed back outside to find that her daughter had disappeared. She soon discovered that Baby Jessica had fallen into an eight-inch diameter well and become trapped deep down in its shaft.

How exactly Baby Jessica fell into the well remains unclear. According to her mother, the opening had been covered up by a heavy rock to prevent just such an accident. "I didn't know what to do," Cissy McClure later recalled. "I just ran in and called the police. They were there within three minutes, but it felt like a lifetime."

Baby Jessica remained trapped in the well, 22 feet below ground and only 8 inches wide, for the next 58 hours, while frantic rescue crews attempted to save her life and the entire nation watched transfixed as the drama played out on television. Because she had fallen so deep into the earth -- beneath layers of rock harder than granite -- and because the diameter of the well was so narrow, the rescue mission was extraordinarily difficult.

Using a large rat-hole rig, a machine normally used to plant telephone poles in the ground, rescue teams drilled a 30-inch wide, 29-foot deep hole parallel to the well. They then began the difficult process of drilling a horizontal tunnel between the two wells about two feet below where Baby Jessica was trapped.

In the meantime, rescue workers pumped oxygen into the well and attempted to maintain constant communication with Baby Jessica, who moaned, wailed and for a while even sang nursery rhymes to pass the time. "After listening to her for so long, I could tell her moods," a detective on the scene recalled. "At one point she was singing. At another point, when a jackhammer started up, she didn't say any words but used kind of a huffy little voice. You could tell it was an angry voice. I would say 80 percent of the time she was either crying or making some kind of noise we could hear. When we weren't calling words of encouragement, we'd tell her to sing for us. I'll never forget her singing 'Winnie the Pooh.'"

The entire rescue ordeal was covered live on CNN, the nation's first -- and at that time only -- 24-hour news network. For only the second time in American history (the first being the explosion of the space shuttle Challenger a year earlier) the entire nation watched literally around-the-clock as a dramatic news story unfolded live on television.

Dubbed "everybody's baby," Baby Jessica tugged at heartstrings of millions of viewers; thousands of strangers sent her family flowers, toys, cards and money. Donations, totaling in the hundreds of thousands of dollars, were set aside in a trust fund for her to inherit at the age of 25. In fact, many point to CNN's coverage of Baby Jessica's rescue as a turning point in the history of news media, the genesis of the era of the 24-hour news cycle.

Finally, on the evening of October 16, 1987, Baby Jessica was lifted safely out of the well. The Pulitzer Prize-winning photograph of her rescue, snapped by Scott Shaw, shows Baby Jessica cradled in the arms of a paramedic, her head wrapped in white gauze, her arms caked in dirt, her bleary eyes just barely open. Over the next few years, Baby Jessica underwent 15 surgeries to treat all of the complications from her three days trapped without food or water inside the well. She ultimately did regain full health. Chronic but controllable rheumatoid arthritis, a missing small toe on her right foot and a prominent diagonal scar across her forehead are the only permanent physical signs of her ordeal.

Once she grew older, Baby Jessica could not remember anything about her three days trapped in a well in her aunt's backyard or her lengthy recovery. She did not even learn her own story until she was five years old and saw an episode of Rescue 911, recounting the story of a baby girl's rescue from a well three years earlier. Moved to tears by the story, she asked her stepmother (her parents had since divorced) what the girl's name was and learned it was her.

Ever since those dramatic three days in 1987, Morales has lived an extraordinarily ordinary life. She graduated from Greenwood High School outside Midland in 2004, and in 2006 she married a man named Daniel Morales. She has two children, Simon and Sheyenne, and stays home to care for them. On March 26, 2011, her 25th birthday, Morales gained access to her trust fund, worth approximately $800,000, which she plans to save for her children's college education.

Morales does not often speak about her rescue, and in a recent interview she insisted it has had very little impact on her life. "Couldn't cage me then, why should it cage me now?" she asked rhetorically. And while people who recognize her by the scar on the forehead still call her "Baby Jessica," Morales says the name does not bother her. "Like they told Lil' Bow Wow, you'll never get rid of the 'little' part," she said. "Cause you'll always be what you are remembered as."