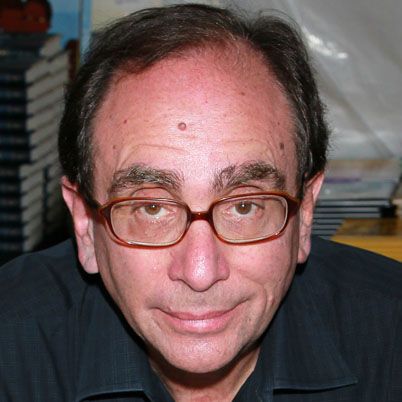 R.L. Stine was born Robert Lawrence Stine in Columbus, Ohio, on October 8, 1943. Stine began writing stories at the age of 9, using an old typewriter that he found. He initially made up jokes and humorous stories, not the spine-tingling tales that later made him famous.

Stine's father worked as a shipping clerk in a warehouse, and his mother stayed home to look after young Robert and his two siblings. Stine has described himself as "a very fearful child," and said that his mother gave him one of his first serious frights by reading Pinocchio. "The original Pinocchio is terrifying ... He goes to sleep with his feet on the stove and burns his feet off!" Stine said of the classic tale, according to the HarperCollins website.

At The Ohio State University, Stine remained focused on the lighter side of life. He edited the school's humor magazine, The Sundial, for several years. After graduating in the mid-1960s, he moved to New York City.

In New York, Stine worked as a writer and editor. He eventually landed a position at Scholastic, Inc., working on children's magazines. He created a humor magazine for kids, Bananas, in the mid-1970s, and later launched Maniac magazine for the company. Outside of his day job, Stine wrote humorous books for kids under the name "Jovial Bob Stine."

After losing his job at Scholastic during a company reorganization, Stine began writing full-time. He branched out into the horror genre, beginning his first scary tale with only the title—Blind Date. The book received a warm welcome when it was released in 1986, as did Twisted and The Baby-Sitter, released in 1987 and 1989, respectively.

In 1992, Stine started taking younger readers on their own thrill ride with the Goosebumps series. These books, which he produced through his wife Jane's Parachute Press book-packaging company, targeted the tween market. The first title, Welcome to Dead House, was quickly followed by more novels. At one point, Stine was writing one or two books each month. Each title featured the trademark elements of the series: Page-turning plots and daring cliffhangers at the end of each chapter.

Goosebumps soon became a literary phenomenon. The books became bestsellers in the United States and abroad, and were eventually translated into 16 different languages. Goosebumps was turned into a television series as well. The tremendous popularity of the series turned Stine into one of the most successful children's writers of all time, drawing comparisons between Stine and adult horror writer Stephen King.

As the 1990s came to a close, Goosebumps fever began to fade. Stine launched a new series in 2000, Nightmare Room, with each title featuring an online component. In 2004, he mixed humor and horror in Who Let the Ghosts Out?, the first book in the Mostly Ghostly series.

Stine continues to branch out into new directions, writing about common student fears in 2011's It's the First Day of School ... Forever! and exploring the vampire craze in 2010's Bitten.

The beloved Goosebumps book series was made into a Hollywood big budget film in October 2015, starring Jack Black as a fictionalized version of Stine. The film won fans and critics over at the box office, and discussions for a sequel is underway.