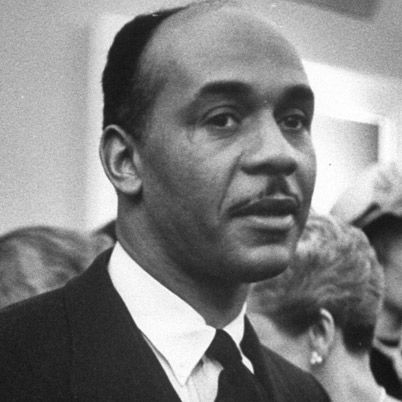 Who Was Ralph Ellison?

Ralph Ellison studied music before moving to New York City and working as a writer. He published his bestselling, acclaimed first novel Invisible Man in 1952; it would be seen as a seminal work on marginalization from an African American protagonist's perspective. Ellison's unfinished novel Juneteenth was published posthumously in 1999.

Ralph Waldo Ellison was born on March 1, 1914, in Oklahoma City, Oklahoma, and named after journalist and poet Ralph Waldo Emerson. Ellison's doting father, Lewis, who loved children and read books voraciously, worked as an ice and coal deliverer. He died from a work-related accident when Ellison was only three years old. His mother Ida then raised Ellison and younger brother Herbert by herself, working a variety of jobs to make ends meet.

In his future book of essays Shadow and Act, Ellison described himself and several of his friends growing up as young Renaissance Men, people who looked to culture and intellectualism as a source of identity. A budding instrumentalist, Ellison took up the cornet at the age of eight and years later, as a trumpeter, attended Tuskegee Institute in Alabama, where he studied music with his eye on becoming a symphony composer.

In 1936, Ellison went to New York over the summer with the intent of earning enough money to pay for his college expenses, but ended up relocating. He started to work as a researcher and writer for the New York Federal Writers Program, and was befriended by writers Richard Wright, Langston Hughes and Alain Locke, who all mentored the fledgling scribe. During this period, Ellison began to publish some of his essays and short stories, and worked as managing editor for The Negro Quarterly.

Ellison later enlisted as a Merchant Marine cook during World War II. Married briefly before, in 1946 he wed Fanny McConnell, and the two would remain together for the rest of Ellison's life.

Ellison started writing what would become The Invisible Man while at a friend's farm in Vermont. The existential novel, published in 1952, focused on an African American civil rights worker from the South who, upon his move to New York, becomes increasingly alienated due to the racism he encounters. Upon its release, Invisible Man became a runaway hit, remaining on bestseller lists for weeks and winning the National Book Award the following year. With millions of copies eventually printed, the novel would be regarded as a groundbreaking meditation on race and marginalized communities in America, influencing future generations of writers and thinkers.

'Shadow and Act,' 'Going to the Territory' Essays

Ellison traveled throughout Europe in the mid-1950s, and lived in Rome for two years after becoming an American Academy fellow. He continued writing — publishing a collection of essays in 1964, Shadow and Act — and taught at colleges and universities, including Bard College and New York University. He published his second collection of essays, Going to the Territory, in 1986, yet was stalled over the decades from completing his second novel, which he envisioned as a great American saga.

Ellison died from pancreatic cancer in New York City on April 16, 1994. The novel that he had been working on prior to his death was released posthumously in 1999 and titled Juneteenth, with final shaping done by his literary executor, John Callahan, at the behest of his wife Fanny. Three Days Before the Shooting, released in 2010, offered a more comprehensive look at how the novel was shaped along with a look at Ellison's full manuscript.

Invisible Man continues to be held up as one of the most highly regarded works in the American literary canon.