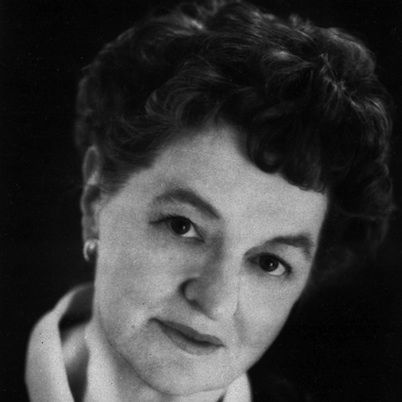 Who Was P.L. Travers?

P.L. Travers' rich fantasy life propelled her to write stories and poems at an early age, and after a brief stint in the theater, she moved to London, England, to pursue a literary life, hobnobbing with Irish poets such as William Butler Yeats. The Mary Poppins tales sprang from Travers entertaining young visitors, combined with a love of mythology. The Disney film Mary Poppins made the notoriously private and prickly Travers immensely wealthy, but also unhappy.

P.L. Travers was born Helen Lyndon Goff on August 9, 1899, in Maryborough, Queensland, Australia. Her mother, Margaret Agnes Morehead, was the sister of the Premier of Queensland. Her father, Travers Goff, was an unsuccessful bank manager and heavy drinker who died when she was 7.

Called Lyndon as a child, Travers moved with her mother and sisters to New South Wales after her father's death, where they were supported by a great aunt (the inspiration for her book Aunt Sass). She lived there for 10 years, although boarded at Sydney's Normanhurst Girls School during World War I.

Travers had a rich fantasy life and loved fairy tales and animals, often calling herself a hen. Her precocious reading led her to undertake The Decline and Fall of the Roman Empire, and her writing talents emerged during her teens, when she began publishing poems in Australian periodicals.

Adopting the stage name Pamela (popular at the time) Lyndon Travers, she gained a modest reputation as a dancer and Shakespearean actress. Her wealthy relatives, however, did not approve; feeling that Australians lacked humor and lyricism, she left for London, England, to seek the literary life.

Having begun her journalism career in Australia, Travers was able to parlay her voyage into travel stories for homeland papers. Once in England, she began publishing articles in various papers, including poems that she had submitted to The Irish Statesman. Its editor, George William Russell, pseudonymously known as AE, became a lifelong supporter of Travers.

Travers had a love of Irish mythology, perhaps stemming from her father's stories when she was a child, so the friendship had a special significance. Through Russell, she also became friends with poet William Butler Yeats, and further explored her mythological interests studying with mystic G.I. Gurdjieff.

Travers's first published book, Moscow Excursion (1934), utilized her travel-writing experience, but the book that would make her famous followed close on its heel. Recovering from a lung ailment in the country, she regaled two visiting children with tales of a magical nanny, complete with a parrot-head umbrella as a form of transportation and the ability to have tea parties on the ceiling.

During World War II, Travers worked for the U.K.'s Ministry of Information, and near the end of the war lived on a Navajo reservation in Arizona, acquiring an Indian name that she always kept secret.

Despite the success of the Poppins books, Travers continued to write other material—young adult novels, a play, essays and lectures on mythology and symbols—partly because she feared not being taken seriously as a writer. She also served as writer-in-residence at colleges such as Radcliffe and Smith, though she was not popular. The 1964 Disney movie Mary Poppins, starring Julie Andrews and Dick Van Dyke, made Travers immensely wealthy, though she reportedly wept at the premiere. A 2013 film, Saving Mr. Banks, starring Tom Hanks as Walt Disney and Emma Thompson as Travers, tells the behind-the-scenes story of book to film.

Notoriously private and prickly, Travers never married, but she had a longtime roommate, Madge Burnand, who many speculated was a romantic partner. In 1939, Travers adopted a son, Camillus, one of twin Irish boys. (He later ran into his twin in a pub — a shock, as he knew nothing of his real background.)

In 1999, author Valerie Lawson released a biography on Travers entitled Mary Poppins, She Wrote: The Life of P.L. Travers, which excavated the details of her very private life.

In 1977, Travers was made an Officer of the Order of the British Empire. She lived to age 96, dying in London from the effects of an epileptic seizure, on April 23, 1996.

She had planned to write Goodbye, Mary Poppins, to terminate the beloved governess, but instead heeded the outcry from both children and publishers. A musical Mary Poppins closer to Travers's original version of the character debuted on the London stage in 2004. And "Supercalifragilisticexpialidocious," born from the Disney film, through a song written by the Sherman Brothers (sung by Andrews and Van Dyke), forever lives in the English lexicon.