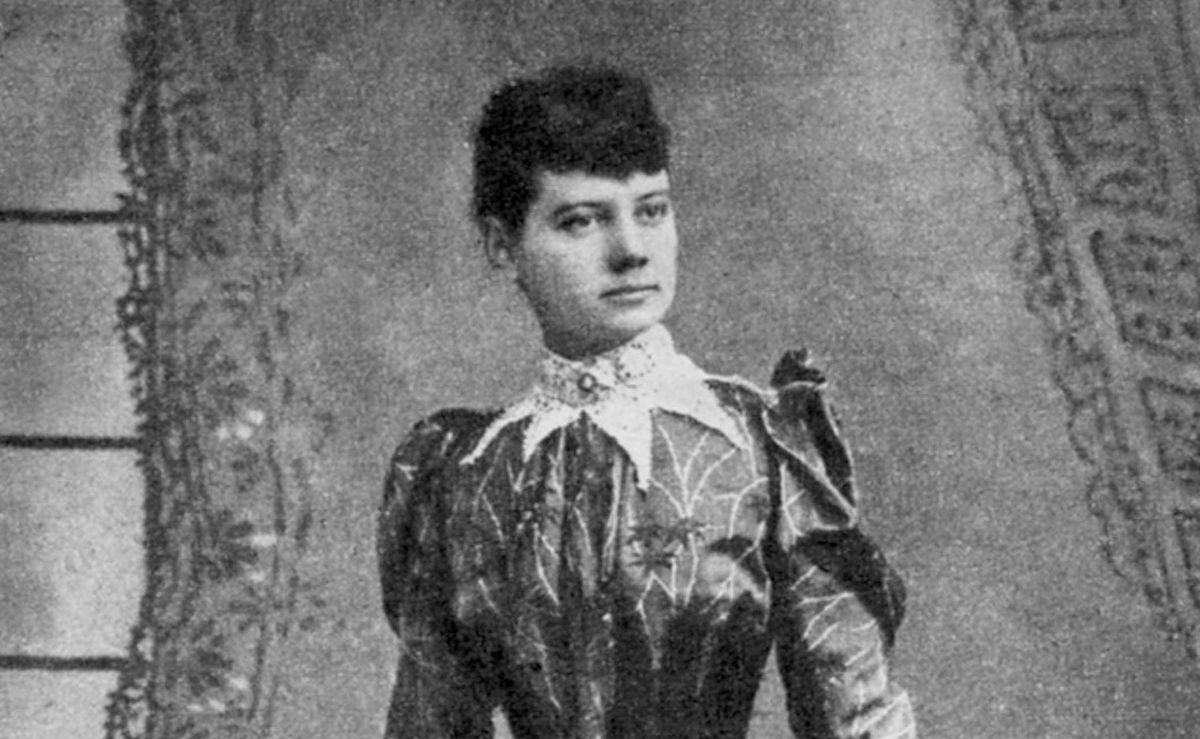 Born Elizabeth Cochran in May 1864 in the suburbs of Pittsburgh, Pennsylvania, Nellie Bly launched her journalistic career early. In 1885, at the age of 21, she penned an anonymous response to a misogynistic newspaper article in a local newspaper, The Pittsburgh Dispatch. The paper’s publisher, impressed by the letter’s moxie, asked the author to reveal his or her identity. Cochran was soon writing for the Dispatch, and following the tradition of the time, adopted a pseudonymous pen name. She chose Nellie Bly, a character in a popular song by composer Stephen Foster.

Bly worked as an investigative reporter for the Dispatch, focusing primarily on women’s issues. She then spent six months traveling in Mexico, exposing life under dictator Porfirio Díaz. In 1887, she moved to New York, where it took her months to land her next job, at the New York World. The World, published by Joseph Pulitzer, specialized in sensationalistic and lurid stories that made it one of the most highly circulated papers of its day. But it also published hard-hitting investigative pieces, a perfect fit for Bly.

She went to great lengths to plan her undercover stunt

Just 23, Bly was now one of a handful of female reporters in New York City. Determined to make her mark, she accepted an unusual — and dangerous — assignment. For years, rumors had swirled about conditions in one of the city’s most notorious places, the “insane asylum” on Blackwell’s Island. Now known as Roosevelt Island, Blackwell’s was home to a number of public institutions, including a penitentiary, a poorhouse, hospitals for infectious diseases like smallpox, and the asylum.

Bly’s editor suggested she have herself committed to the asylum for 10 days to expose the real conditions, and Bly immediately agreed. Working under an assumed name, she took a room in a boarding house and set out to prove herself insane. She wandered the halls and nearby streets, refused to sleep, ranted and yelled incoherently, and even practiced looking “crazed” in her mirror.

Within days, the boarding house owners summoned the police. Bly now claimed to be a Cuban immigrant, suffering from amnesia. A perplexed judge sent Bly to Bellevue Hospital, where she got a taste of the suffering to come, as hospital inmates were forced to eat spoiled food and live in squalid conditions. When Bly was diagnosed with dementia and other psychological illnesses, she was sent by ferry to Blackwell’s Island, in the East River.

Conditions in the asylum were worse than she’d imagined

Originally built to hold 1,000 patients, Blackwell was cramming more than 1,600 people into the asylum when Bly arrived in the fall of 1887. Extensive budget cuts had led to a sharp decline in patient care, leaving just 16 doctors on staff. But most disturbing of all was the prevailing wisdom of the age regarding both the causes of mental illness and how patients should be treated. Asylums like Blackwell’s were considered curiosities, where thrill seekers like Charles Dickens and others could visit those thought “mad.” Doctors and staff with little training — and in many cases, little compassion — ordered harsh and brutal treatments that did little to heal, and much to harm.

Bly quickly befriended her fellow inmates, who revealed rampant psychological and physical abuse. Patients were forced to take ice-cold baths and remain in wet clothes for hours, leading to frequent illnesses. They were forced to sit still on benches, without speaking or moving, for stints lasting 12 hours or more. Some patients were tethered together with ropes and forced to pull carts around like mules. Food and sanitary conditions were horrific, with rotten meat, moldy, stale bread and frequently contaminated water dished out. Those who complained or resisted were beaten, and Bly even spoke of the threat of sexual violence by vicious, tyrannical staffers.

Bly was shocked to discover that many of the inmates were not insane at all. They were recent immigrants, mostly women, caught up in a law-enforcement system in which they were unable to communicate. Others that Bly met at Blackwell’s, and Bellevue Hospital before, had fallen through the cracks of a society with few social safety nets, ending up committed simply for being poor, with no family to support them. To her horror, Bly quickly realized that while many of these inmates were not suffering from mental illnesses before they arrived at the asylum, their treatments inflicted grave psychological damage on them.

Bly’s cover was nearly blown by a fellow reporter, but she was able to stick it out for 10 days, before her editor arranged for her release. Her first articles on her experiences were published within days, and the series became a publishing sensation.

A month after Bly’s articles were published, a grand-jury panel visited the asylum to investigate. Unfortunately, the hospital and its staff had been tipped off in advance. By the time the jury members arrived, the asylum had cleaned up its act, literally. Many of the inmates who had provided Bly with details of their horrific treatment had been released or transferred. The staff denied Bly’s accounts. Fresh food and water had been brought in, and the asylum itself had been scrubbed down.

Despite this effort at a cover-up, the grand jury agreed with Bly. A bill that was already under consideration, which would increase funding for mental institutions, was pushed through, adding nearly $1 million ($24 million in today’s money) to the departmental budget. Abusive staff members were fired, translators were hired to assist immigrant patients, and changes were made to the system to help prevent those who did not actually suffer from mental illness from being committed.

Her time in the madhouse helped launch Bly’s career

Bly quickly became a household name and one of the most famous journalists in the world. Just two years after her madhouse expose, she made headlines again when she re-created the trip depicted in the book Around the World in 80 Days, circumnavigating the globe by herself — and beating the record by a week. Bly retired from journalism following her marriage to a wealthy businessman. She later returned to writing, including a stint as a foreign correspondent during World War I, until her death in 1922.

Bly’s exploits and achievements became the subject of books, plays and a Broadway musical. Her history-making trip was even immortalized in a popular board game released in 1890, which allowed players to travel around the world with the intrepid, audacious reporter.