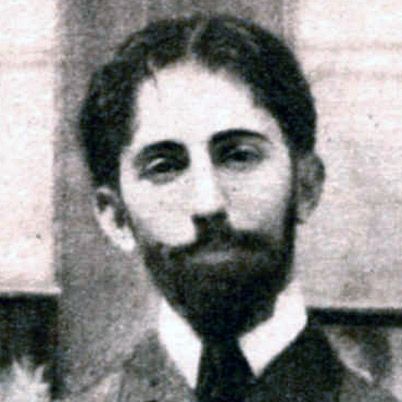 Horacio Quiroga was born December 31, 1878, in Salto, Uruguay. In 1901, he published his first collection of poems, Coral Reefs, and over the next 30 years he wrote and published more than 200 dark stories, many of which were inspired by jungle life. Struggling with severe depression and terminal cancer, Quiroga committed suicide on February 19, 1937, in Buenos Aires, Argentina.

Horacio Quiroga was born on December 31, 1878, in Salto, Uruguay. His father accidentally shot himself during a hunting trip a few months later, just the first of several tragic events that would take place during Quiroga's life and color much of his later work.

His family moved around during his youth, eventually settling in Uruguay's capital, Montevideo, where Quiroga attended university, developed an interest in literature and began to publish his short stories. Shortly thereafter, he returned to his hometown and founded both a literary magazine and a cycling club. But tragedy struck again in 1899, when his stepfather committed suicide. Seeking solace from the experience, Quiroga traveled to Paris on a four-month trip.

Returning from Europe in 1900, Quiroga settled once again in Montevideo and the following year saw the release of his first literary collection, The Coral Reefs. The poems, poetic prose and stories within its pages didn’t bring Quiroga to national attention, as the work was that of a novice looking for his footing.

Regardless, the achievement was overshadowed by the death of his two brothers, who succumbed to typhoid fever that same year. Unable to escape the cruel hand of fate, the following year Quiroga accidentally shot and killed a friend while checking his pistol before a duel. After a brief detention Quiroga was cleared of any wrongdoing by the police, but he was unable to escape his feelings of guilt and left Uruguay for Argentina, where he would spend the rest of his life.

Settling in Buenos Aires, Quiroga found work as a teacher and continued to develop his writing, publishing the collection The Crime of Another in 1904 and the short story "The Feather Pillow" in 1907, both of which showed promise, as well as the considerable influence of the work of Edgar Allan Poe.

During Quiroga's time in Buenos Aires he frequently made forays into the nearby jungle, and in 1908 he moved to a farm in the nearby jungle province of Misiones. Ensconced there, he began publishing stories that led his reader into the jungle right along with him, both physically and metaphorically, haunting them with his dark viewpoint and metaphoric horrors.

Quiroga also continued to work as a teacher, and in 1909 he married one of his students, Ana Maria Cires, and moved her out to his jungle home. Although they would have two children in the coming years, the remote and dangerous life they led proved too much for Ana, and she committed suicide by drinking poison in December 1915.

Following this tragedy, Quiroga returned with his children to Buenos Aires and worked in the Uruguayan consulate. He also continued to write, and it is the stories from this period that led to Quiroga's identification as the father of the modern Latin American short story. Such works as Tales of Love, Madness and Death (1917) and Jungle Tales (1918) brought to life Quiroga’s world, one that depicted both the violence and allure of the jungle.

Hitting his stride, Quiroga continued his prolific output in the new decade, publishing the play The Slaughtered (1920) and the short-story collections Anaconda (1921), The Desert (1924), "The Decapitated Chicken" and Other Stories (1925) and The Exiled (1926). He also ventured into criticism during this time and authored a screenplay for an unrealized film project.

In 1927 Quiroga remarried, to a young woman named Maria Elena Bravo, and two years later published his second novel, Past Love. In 1932 they moved back to his farm in Misiones, but the difficulties that had plagued Quiroga all his life followed him there. Amidst a persistent illness, he published his last work in 1935, around which time his wife left him and returned to Buenos Aires, where Quiroga himself returned in 1937 to receive treatment. He was diagnosed with terminal prostate cancer, and on February 19 of that year he committed suicide by drinking poison.