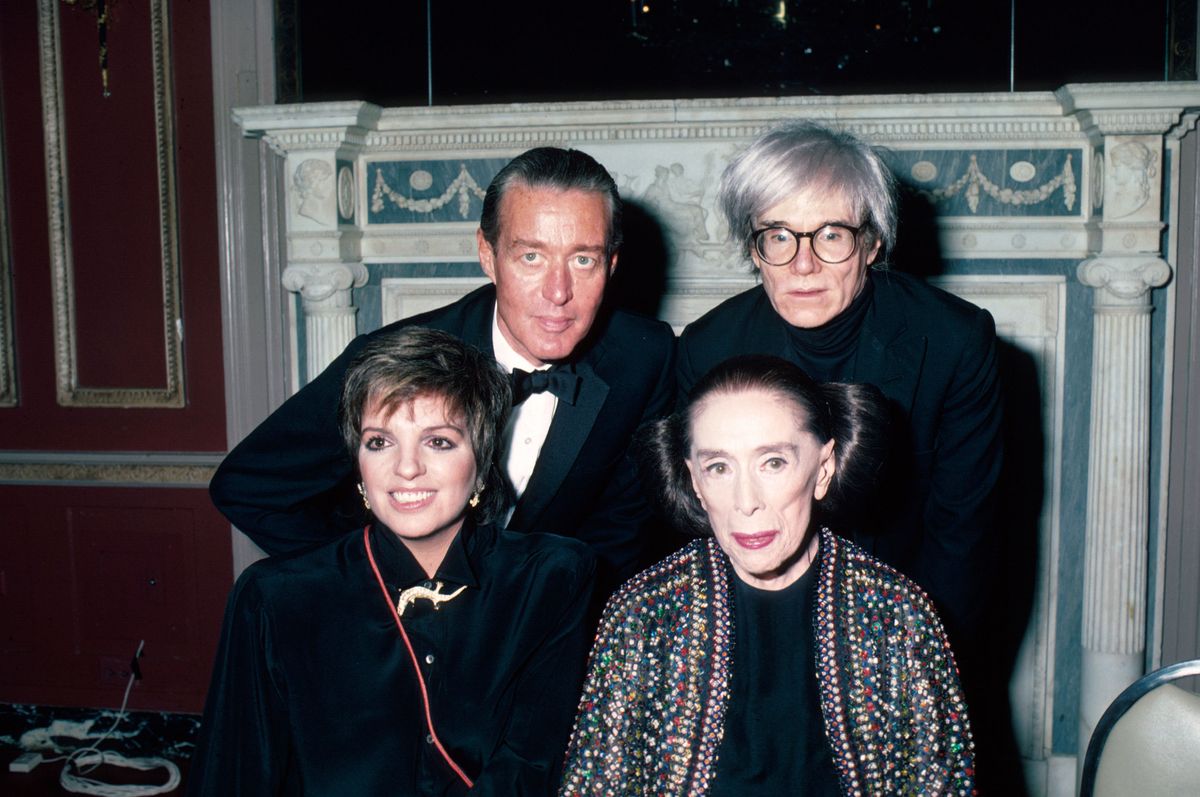 Andy Warhol and Halston got to know each other in the 1960s as their careers were taking off in New York City. Warhol was then using images of everyday consumer goods and celebrities to create "pop art." As a designer, Halston produced attire that was casual, attractive and comfortable to wear, offering a change from the more staid fashions and fabrics that had preceded him. Warhol and Halston had several things in common: they were both gay men who'd grown up in more conservative areas (Pittsburgh for Warhol, Des Moines for Halston), they'd both been window dressers during their careers and they both understood the power of personality, images, and stardom. By the '70s, they were friends and collaborators who would spend the next decade and a half working, and partying, together as they continued to take the worlds of art and fashion by storm.

Warhol and Halston were fans of each other's work

Halston appreciated Warhol's work enough that he commissioned Warhol to do his portrait and decorated his home with different Warhols. In turn, Warhol wore Halston's fashion line, which was becoming known for updated and innovative clothes like a shirtdress made from Ultrasuede fabric and billowing caftans. Warhol once noted, "I like Halston’s things because they’re simple, and that’s what American clothes should be." Warhol also maintained a collection of the designer's shoes and cosmetics.

Their mutual admiration meant the two often collaborated on projects. This started in 1972 at the Coty American Fashion Critics' Awards. Warhol was put in charge of Halston’s runway presentation for this event. The spectacle he concocted included bongo playing and a tap-dancing Baby Jane Holzer. At later Halston shows, Warhol was often the unofficial photographer. And in 1982 Warhol put together an ad campaign for Halston's menswear, accessories and cosmetics.

Halston was inspired by Warhol flower prints to create dress and scarf designs. The carpet color at the new workspace Halston moved into in 1978 was Warhol's suggestion. Halston was also featured in Warhol's 1979 book Exposures, and appeared in the Warhol television shows Fashion and Andy Warhol's TV. 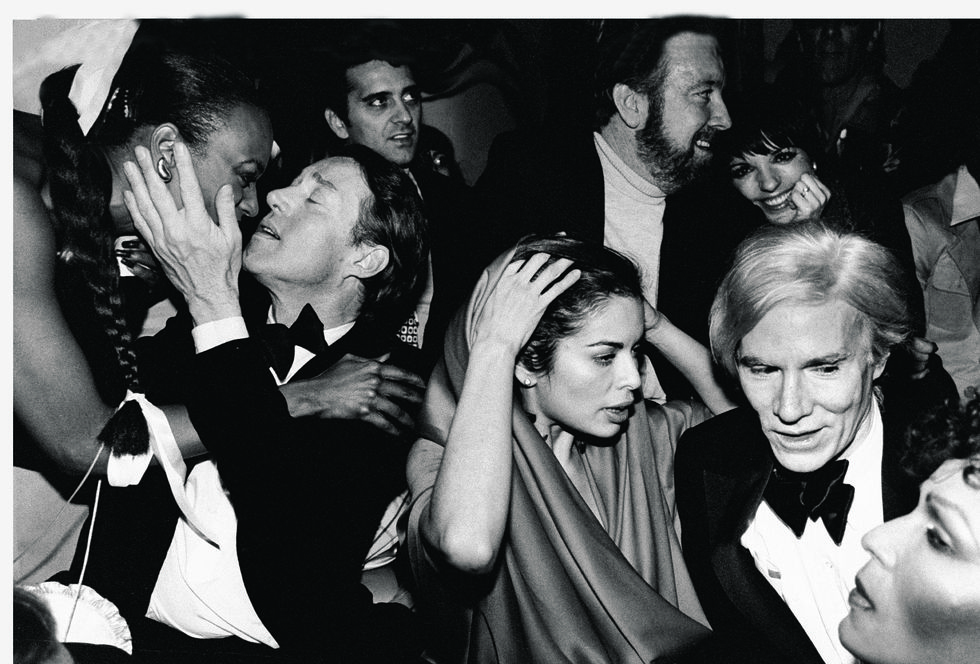 They helped each other navigate the celebrity world

Halston and Warhol's interactions brought their spheres of art and fashion together. Warhol cast several of Halston's models in a project called Vivian’s Girls that put his own spin on a soap opera. Victor Hugo, a Venezuelan who was Halston's on-again, off-again boyfriend and sometimes window designer, also modeled for and collaborated with Warhol.

Both Warhol and Halston understood the power of celebrity. As he dressed and befriended stars, Halston became the first celebrity designer. Warhol produced celebrity portraits – early subjects included Elizabeth Taylor and Marilyn Monroe – that resulted in other stars coming to his door to have their own portraits done. When working on these, Warhol handled his celebrity clientele with a finesse he'd seen Halston demonstrate in fitting rooms.

Famed nightclub Studio 54 was another place where Halston and Warhol's circles would meet and mingle. The club was famous for excess, such as the birthday party Halston threw for Bianca Jagger during which a naked man led her on horseback around the dance floor (though Jagger swears she never rode the horse into the club). Warhol and Halston were Studio 54 regulars, which earned them fame at a time when disco-era crowds were clamoring to get past the bouncers and dance alongside the stars of the day. Warhol once offered this suggestion on how to get into 54: "Always go with Halston or in Halston."

Warhol and Halton gave each other nonconventional gifts

Over the years, Halston gave Warhol memorable birthday gifts. In 1978, he presented Warhol with a white fur coat. The following year he offered the artist 20 boxes that included skates, an instructional book on skating and also threw Warhol a party at Studio 54. In 1980, Halston's gifts included a box of ugly shoes, a singing telegram and a shoe-shaped cake. And in 1985, Halston arranged for pink orangutan-costumed figures to be a Warhol birthday surprise.

Halston gave Warhol a special present in 1984. Having seen Miss Piggy shopping for Halston wedding attire on Entertainment Tonight, Halston sent her and Kermit a congratulatory note and some of his cosmetic products. In return, creator Jim Henson provided the designer with a box of Muppet items. Halston passed these along to Warhol, who, appreciative of the gift, placed them in one of his Time Capsules.

Warhol also offered Halston presents. In 1978, he decided his Christmas gift would be "paintings of a free drink ticket from 54." On an occasion when he wanted to give Halston something but had nothing with him, he instead offered a voucher that said: "I.O.U. One Art." Warhol also smoothed the way for Halston to rent his seaside home in Montauk on New York's Long Island. Though at one point he received an offer that would have doubled the rent, Warhol felt "it’s so much better with Halston, he keeps everything up."

In 1982, Halston made a deal with J.C. Penney to create more budget-friendly Halston clothing for the store. But in a backlash, Bergdorf Goodman decided to stop carrying Halston's upscale line, which diminished his brand's power. Halston, who had previously licensed his name, then saw different companies take over the rights. By the mid-1980s he was no longer able to produce designs under his name.

Warhol learned a lesson from what had happened to his friend. He wrote in 1984, "Where did Halston go so wrong when he sold his name? What should he have done that he didn’t? That’s what I want to know. And I want to know it from him, I want to sit down and find out what I should do if I ever sell myself… In case I ever want to let a big corporation buy me out and just be a figurehead. Because there’s got to be a way to do it where you don’t lose all your power the way Halston did."

Warhol died in 1987 following complications from an operation to remove his gallbladder. Halston grieved his friend's death but was hurt when The Andy Warhol Diaries, published post-mortem, revealed embarrassing details about his life thanks to Warhol's close observations of their circle. An entry from 1978 read: "[Liza Minelli] said to Halston, 'Give me every drug you've got.' So he gave her coke, a few sticks of marijuana, a Valium, four Quaaludes, and they were all wrapped in a tiny box."

Yet Halston had bigger concerns by the time Warhol's Diaries were published in 1989, as he'd learned he was infected with HIV a year earlier. AIDS-related cancer claimed his life in 1990.