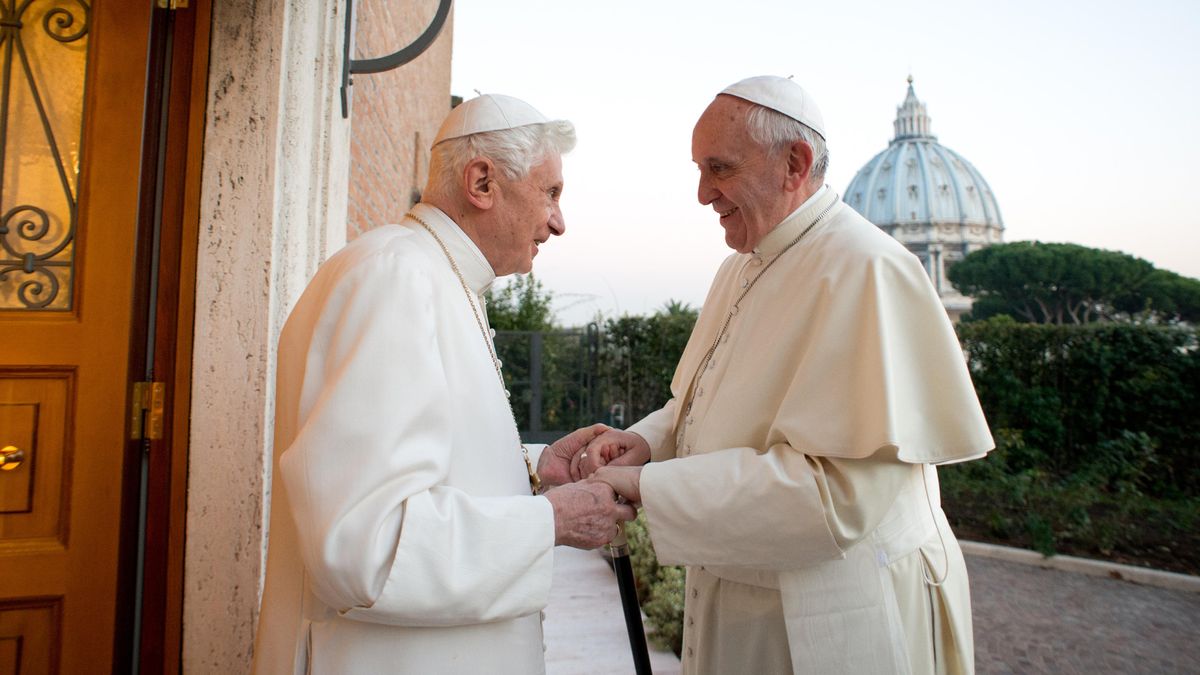 Jorge Mario Bergoglio of Argentina, later known as Pope Francis, and Joseph Aloisius Ratzinger of Germany, known until his December 2022 death as Pope Emeritus Benedict XVI, were brothers in Christ before being selected for the most holy position at the Vatican in Rome. When Benedict stepped down in 2013 and Francis ascended to the role, it was the first time in more than half a millennia two popes had been alive at the same time.

When Francis ascended to the papacy, unlike generations of popes before him, his predecessor still resided at close quarters within the Vatican. Their disagreement on many issues pertaining to the Roman Catholic Church resulted in a reported split within the organization, with hard-line conservative cardinals and priests on the side of the former, and progressives leaning into Francis’ more tolerant and inclusive views.

Diarmaid MacCulloch, professor of Church History at Oxford, told Vanity Fair in 2018 that “two popes is a recipe for schism.”

Following the death of Pope John Paul II in April 2005, the church convened a papal conclave to replace the deceased pontiff, reportedly considering both Benedict and Francis. Once participating cardinals had cast their votes, Benedict rose to the papacy. Francis, formerly as archbishop of Buenos Aires, then cardinal and president of the Bishop’s Conference of Argentina, reportedly had little interest in the papacy, preferring instead to continue his ongoing work in Argentina.

Prior to becoming pope, Benedict was known for his rigid views on Catholicism. Ordained as a priest in 1951 in his native Bavaria, Benedict went on to become a highly regarded theologian, knowledgeable in the intricacies and fundamentals of his faith. Though originally a liberal theologian, his views would narrow and much of his prolific writing concerned upholding the traditional Catholic doctrine.

Described in the media as “the pope of aesthetics,” Benedict reinstated much of the pomp eschewed in the years following the adoption of Vatican II, which did away with many of the visual excesses of the Church. Following his appointment, as the world grappled with a struggling economy, Benedict donned fur-lined vestments, gem-encrusted rings and pectoral crosses; he also reintroduced the bright red shoes favored by popes long dead.

As the Church struggled to find its place in the increasingly secularized 21st century, Benedict saw such visual excess and adherence to doctrine as a way of signaling a return to and reinforcement of the traditional practices and views of Catholicism. Though prayer and work remained uppermost, Benedict saw strength and unity in the outward, physical expressions of his faith. “All the great works of art, the cathedrals – the Gothic cathedrals and the splendid Baroque churches – are a luminous sign of God, and thus are truly a manifestation, an epiphany of God,” Benedict once said. 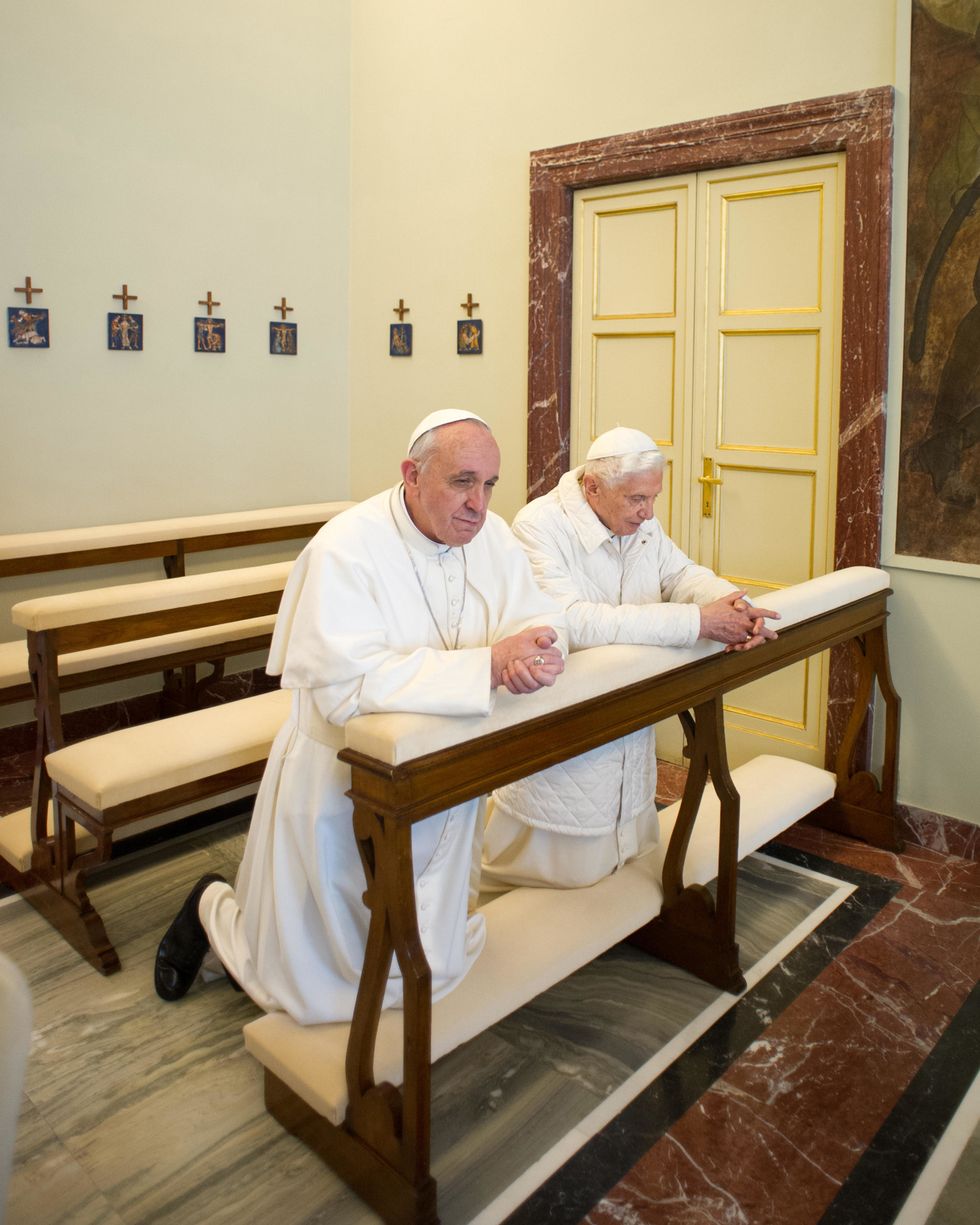 The child of Italian immigrants to Argentina, Francis graduated from technical school before beginning his religious training. A teacher of literature and psychology, he studied theology and was ordained as a priest in 1969. Noted for his humility and focus on mercy, Francis found his religious career in Argentina under scrutiny due to allegations concerning the role of the Church—and his own actions—during the country’s brutal military dictatorship from 1976 to 1983.

Francis, who served as head of the Jesuit order in Argentina from 1973 to 1979, was accused of a complicit silence as when the powers-that-be carried out murders and abductions, all while enjoying the backing of the Church. The period had a lasting effect on Francis, according to scholars. "As archbishop, he faced a monumental task, and he was even accused of collaboration with the [so-called] "dirty war," which he strenuously denied—and was ultimately cleared,” Ramon Luzarraga, theologian-in-residence at the University of Dayton, told The Guardian in 2013, adding that if the then-newly elected pope can "restore the credibility of the Church there [in Argentina], he can handle the scandals that have befallen the Church worldwide because he knows how to connect to people."

When Francis took over, the Vatican became more minimalistic and modern

In 2013, at age 85, Benedict became the first pope since Gregory XII in 1415 to resign from the position, reportedly due to his age and waning physical and mental stamina. Vowing to stay “hidden from the world” in his new life, Benedict anointed himself with the title Pope Emeritus, a moniker many faithful saw as a signal he would not remain as tight-lipped on Church matters as vowed.

Francis, the first pope from Latin America and champion of the marginalized and poor of the world, became the 266th pontiff at the age of 76. In direct contrast to Benedict, Francis immediately adopted a less showy, more humble outward appearance, vowing to continue to live simply, as he had done throughout his career in the Church.

Francis’ vision of Catholicism embraced change and promoted a Church for modern people in modern times, a stark contrast to Benedict's advocacy for strict adherence to tradition and doctrine. The two views—and the rare occurrence of two living popes—reportedly fueled a factional split within the Vatican.

While Benedict stepped back after retirement, in 2019 he wrote a letter publicly undercutting Francis

During his successor’s early years as pope, Benedict stepped back from the spotlight, favoring a life of prayer and contemplation in the newly refurbished monastery he moved to within the Vatican. Yet his existence encouraged conservative voices within the Church, who saw Francis’ liberalism as damaging to the Church, particularly in relation to his views on divorce, same-sex marriage and clerical sexual abuse.

While rare, the physical meetings appeared cordial. But concerns of a simmering rivalry peaked when Benedict broke his silence in April 2019. Though officially in retirement, he penned a 6,000-word letter putting the blame for the Catholic Church’s ongoing clerical sex abuse crisis on a permissive culture stemming from the 1960s, progressive theological ideas and the disappearance of God from public discourse in the West.

The letter publicly undercut Francis, whose views on the subject had already been made public. The reigning pope lay the blame for the sex abuse crisis directly on the Church, citing a systemic abuse of power and the pursuit of prominence and authority within the existing Church hierarchy.

The letter and resulting aftershocks supported claims that Benedict still retained vast influence within the Vatican hierarchy and among global worshippers. Concern rose that having two living popes—with contradictory stances on important issues—would lead to confusion among the flock.

The two men's unprecedented relationship was explored in the 2019 film The Two Popes, starring Anthony Hopkins as Benedict and Jonathan Pryce as Francis, and directed by Brazilian Fernando Meirelles.

Despite tension between the popes, Benedict believed in the power of unity

In the fallout from Benedict’s missive, the Vatican called for unity. In a rare interview granted in the months following the very public split, Benedict told Italian magazine Corriere Della Sera that there is currently only one pope, Francis. And though he did not directly address the reported divergence between himself and his successor, Benedict made it clear that no matter what happened then or in the future, the Catholic Church would endure.

“The unity of the Church has always been in danger, for centuries,” Benedict was quoted as saying. “It has been for all its history. Wars, internal conflicts, centrifugal forces, threats of schisms… In the end, the awareness that the Church is and must remain united has always prevailed. Its unity has always been stronger than internal struggles and wars.”