From The Cat in the Hat to Horton Hears a Who!, Dr. Seuss had a magical way of taking merging animal antics with silly words and turning them into poetically memorable children’s books.

Behind that fun-loving exterior was a man with a bit of a competitive edge to prove that he could conquer any challenge. In fact, both The Cat in the Hat, published in 1957, and Green Eggs and Ham, published in 1960 were the results of publishers daring the author to write with a limited number of words.

But the reason behind the tight vocabulary wasn’t all fun and games — it was to inspire young children to develop a passion for the written word and to enjoy reading. After all, he did write: “The more that you read, the more things you will know. The more that you learn, the more places you’ll go.”

READ MORE: Who Was Dr. Seuss' Inspiration for the Grinch? Himself!

Born Theodor Seuss Geisel in Springfield, Massachusetts on March 2, 1904, the author was known as “Ted” by those closest to him while growing up on 74 Fairfield Street. He often visited the Springfield Zoo with his dad and loved pencil sketching the animals.

While attending Dartmouth College, he started writing for a college humor magazine called Jack-O-Lantern, using his mom’s German maiden name Seuss and eventually granting himself a doctorate title, giving birth to his pseudonym Dr. Seuss in 1927. He also wrote under the name Theo LeSieg since the surname was his own reversed.

The young “doctor” showed his determination early on when he faced a whopping 27 rejections from book publishers for his first children’s book And To Think That I Saw It On Mulberry Street. One day, when he was walking down the street, he literally ran into an old classmate who happened to work for Vanguard Press — and the book was published in 1937. “That’s one of the reasons I believe in luck,” he said, according to Seussville. “If I’d been going down the other side of Madison Avenue, I would be in the dry-cleaning business!” 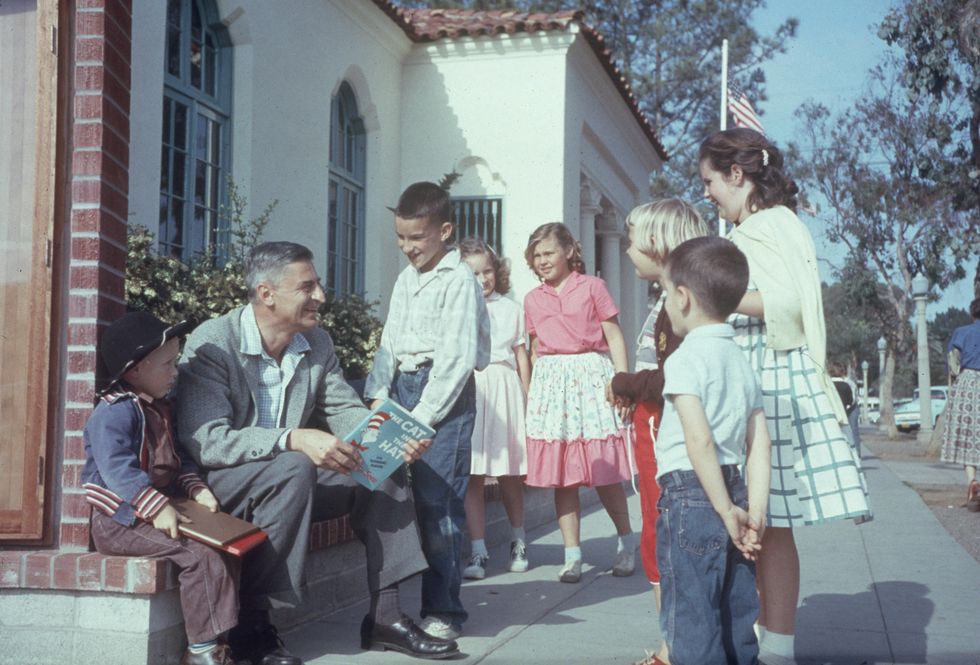 Dr. Seuss talking with a group of children while holding a copy of "The Cat in the Hat" in La Jolla, California, on April 25, 1957.
Getty Images

With that kind of fate kicking off his success, the now-published Dr. Seuss learned to always listen to his publishing house team. After moving to La Jolla, California, the director of Houghton Mifflin’s education division, William Spaulding, presented him with a challenge in 1948 that would change his life.

A Life magazine article "Why Do Students Bog Down on First R? A Local Committee Sheds Light on a National Problem: Reading" by novelist John Hersey in 1954 and a book called Why Johnny Can't Read: And What You Can Do About It by Rudolf Flesch in 1955 had put the conversation about kids’ distaste for reading into the national spotlight.

So Spaulding gave Seuss a directive: “Write me a story that first-graders can’t put down.” Not just that, he was only to use 225 different words from a list of 348.

And the doctor pulled a trick out of his hat: The Cat in the Hat. Published in 1957 using 236 words (so, he didn’t technically pull off the challenge since he was over by 11!), the simple repetitive tale immediately found so much success that Seuss, his wife Helen and Phyllis Cerf founded a Random House Beginner Books division with one mission: Get more kids to read.

READ MORE: The Story Behind Dr. Seuss' The Cat in the Hat

Only 50 words are used in 'Green Eggs and Ham'

Shortly thereafter, his publisher, Cerf's husband Bennett, pushed him either even further: Write a book with only 50 words.

The result was the 1960 book Green Eggs and Ham — the Dr. Seuss book to use the least number of words yet sell the most copies.

After earning the Pulitzer Prize in 1984 for his “contribution to the education and enjoyment of America’s children and their parents,” Dr. Seuss died on September 24, 1991, at the age of 87, in La Jolla, California.

Now his legacy of inspiring a love for reading continues, as his birthday, March 2, is hailed as National Education Association’s Read Across America Day, to celebrate reading among children and teens. While the day started as a partnership with Dr. Seuss Enterprises, it was rebranded in 2019 to appeal to a more diverse range of readers. That said, it continues to fall on Seuss’ date of birth.

After all, Dr. Seuss did say, “You can find magic, wherever you look. Sit back and relax, all you need is a book.”