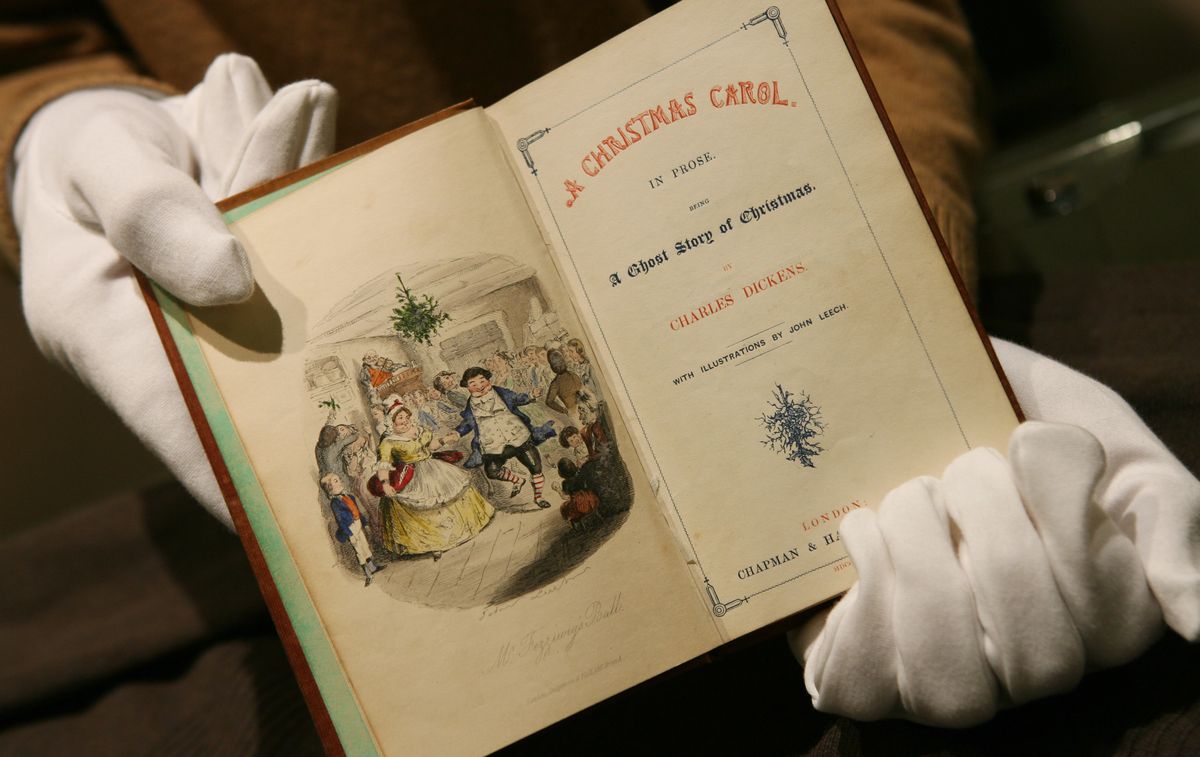 Charles Dickens' A Christmas Carol is among his most popular work. When it was initially published in December 1843, Dickens had been certain the book would sell well — and had hoped those sales would resolve some of his money woes. But he couldn't have foreseen how completely the tale would be embraced by the public, or that it would evolve into a beloved classic.

Dickens began to write what would become A Christmas Carol in October 1843. He was determined to get the book out in time for Christmas that year, giving him a very short window to work in. However, the pressing schedule wasn't solely motivated by authorial inspiration — Dickens also had a desperate need for money.

At the time, Dickens' writing career was in a slump. He'd had hits like The Old Curiosity Shop, but his current serialized novel, The Life and Adventures of Martin Chuzzlewit, wasn't selling well. His publishers wanted to decrease his pay from £200 to £150 per month, which would have been devastating. Dickens was in debt and had a family to support. Not only was he married with a fifth child on the way, his father was also in a financial drain.

Dickens figured a successful Christmas book could net him around £1,000. Yet though his goal wasn't to pen a timeless work of art, his dire financial situation prompted him to get the book done.

While money was admittedly a factor in Dickens writing A Christmas Carol, but he also had a message to convey about Victorian society and how it treated its most desperate members. Early in 1843, Dickens had read a parliamentary report about children in the workforce, which contained testimony from young laborers about their long days, low wages, and dangerous working conditions. 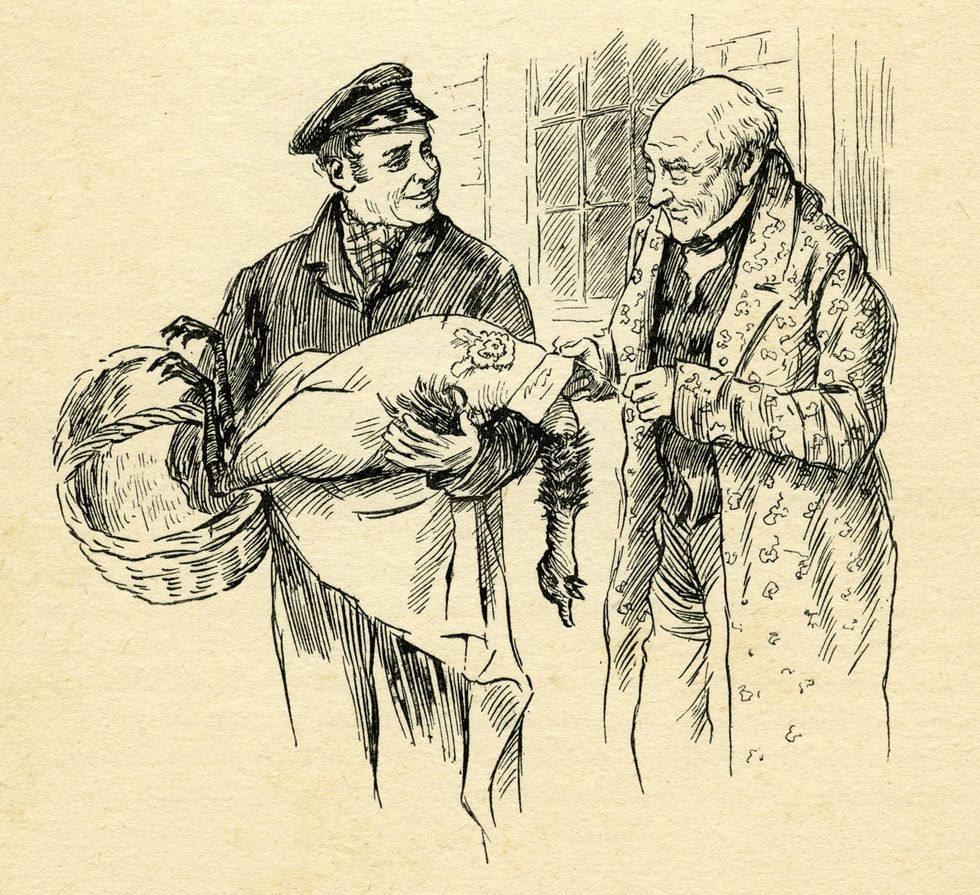 An illustration of Scrooge delivering a turkey in "A Christmas Carol"
Photo: Culture Club/Getty Images

Having worked in a factory himself as a boy due to his family's straitened circumstances, Dickens always felt a kinship with those who were struggling, particularly children. The parliamentary report made him want to write a pamphlet titled "An Appeal to the People of England on behalf of the Poor Man’s Child." Yet a few days later he changed his mind, noting in a letter on March 10, 1843, that he'd put off the pamphlet because he had other means in mind with "twenty thousand times the force" of this initial approach.

Later in 1843, Dickens visited schools for the poor in the slums (called "ragged schools" in reference to the worn clothes of many attendees), where he encountered children who lived as thieves and prostitutes to survive. In October, he traveled to Manchester to give a speech on the importance of education for every class. Soon after this talk, he had the idea for A Christmas Carol — a book that showed the challenges faced by the poor, and how more generosity could lessen their burdens.

Dickens began writing A Christmas Carol in October and finished the story, which came in at less than 30,000 words, six weeks later. Writing a full story in this manner was new for him, as his other novels had been serialized over months and years. The method may have helped him craft a stronger story.

To create Tiny Tim, the ailing young boy who's a primary catalyst for Ebenezer Scrooge changing his miserly ways, Dickens drew on the lives of two family members: a sickly younger brother who'd been known as Tiny Fred and a nephew, Henry Burnett Jr., who was disabled. Dickens had seen his nephew on his Manchester visit and had noted some of the difficulties the boy faced.

In addition to Tiny Tim, Dickens incorporated a glimpse of the devastation he witnessed in real life. Scrooge discovers a feral boy (Ignorance) and girl (Want) under the cloak of the visiting Ghost of Christmas Present. The two are described as "wretched, abject, frightful, hideous, miserable." When Scrooge asks if they can be helped, the spirit throws the miser's earlier words back at him, asking, "Are there no prisons? Are there no workhouses?"

The book was sold out by Christmas

Some books need to build a following, but A Christmas Carol was an immediate success. The debut print run of 6,000 copies, which arrived on December 19, sold out in a week. The timing was ripe for a Christmas book to take off, as Christmas trees were being popularized by Prince Albert and Queen Victoria, and Christmas cards soon arrived on the scene.

However, there was something special about A Christmas Carol beyond its connection to the zeitgeist. Dickens would write other books and articles at Christmastime in the following years, yet those works — among which are The Chimes and The Cricket on the Hearth — are mostly forgotten today.

Despite Carol's success, Dickens didn't get his hoped-for financial windfall. Instead of £1,000, he received about £250, a big disappointment. The books were beautiful, with red cloth binding, gilt-edged pages and colored illustrations. But book sales weren't enough to cover the costs of production, which had included an array of last-minute changes insisted upon by Dickens.

Dickens did 127 readings of the novel

A Christmas Carol has been adapted countless times. Soon after the book was published, unauthorized stage versions appeared (sadly, given his financial troubles, Dickens usually didn't make any money from these). And the story's often been filmed, with versions ranging from the silent era to later ones with the Muppets, Bill Murray and Toni Braxton.

After hearing a Carol reading by Dickens in Boston on Christmas Eve in 1867, a businessman decided to close his factory for Christmas. He also provided all of his workers with a turkey, just like Scrooge. This demonstrates how these readings helped spread the message — and renown — of A Christmas Carol. It's another reason why the name Charles Dickens is forever linked with Christmas and his famous novel, A Christmas Carol.